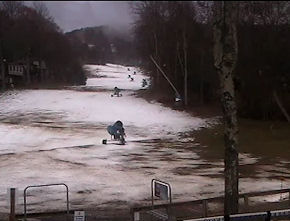 Sugar Mountain remains open although you’d have to be a glutton for punishment to want to ride there today. Not only is the forecast for a raw, rainy day – the forecast on the slopes is for a LOT of bare areas and thin coverage.

We’re going on record to say that the only reason Sugar is open today is to simply attempt to stay open on consecutive days throughout the season. Cataloochee’s snow cover looks more favorable for skiing and riding today and yet they are closed until Friday.

One emailer wrote, "I noticed that the snow report for this morning includes "thin coverage". I would think the reverse would be more accurate. They have a base of grass and dirt, with thin coverage of snow."

Okay, so it’s true that Sugar could or should be closed, but our feeling is this – they want to remain open and nobody at Sugar is kidnapping people off the streets and making them hit the slopes. If they want to remain open then good for them. If someone actually skis or snowboards there today, we’re betting that it’s on borrowed or rented skis. Regardless, it is their decision and they like to be able to market the fact that they remained open for "x" number of days during the season and if they can make it "consecutive days" all the better. 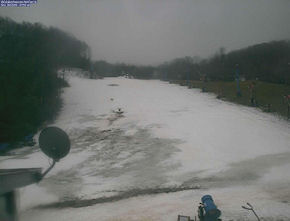 One last thing on the subject of Sugar – you have to hand it to them for going after every snowmaking opportunity. They put down a lot of snow in a 48 hour period and got open. Ditto that for Cataloochee which COULD be open today if they chose to. There’s actually quite a bit of snow up at Ski Beech as well. So hats off to all of the resorts that made snow in preparation for the start of ski season.

WHO WILL BE OPEN THIS COMING WEEKEND???

We’re thinking that more ski areas will be able to operate this coming weekend. There’s some serious colder temperatures on the way beginning Thursday night and remember that with the advancements in snowmaking technology these days – ski areas can open after one night of cranking out the manmade snow. If you’re debating whether or not YOUR favorite resort will be open, we’ll say that it is a safe bet that Sugar, Cataloochee and Snowshoe Mountain will be open. Although there is no snow on Appalachian’s slopes this morning (almost none anyway) they could make enough to open in one night if they choose to. We’re betting that Appalachian will opt for a Saturday or Sunday opening date and remember that as soon as they do open, they will award the first 100 visitors a FREE lift ticket for that first day of the season at Appalachian Ski Mountain.

Snowshoe Mountain’s Laura Parquette definately had her "glass half full" cup of coffee this morning when she posted, "Mother Nature continues to prove just how fickle she can be this week. After dropping 6" of fresh snow on Friday, and allowing around the clock snowmaking through Sunday morning, today she brings rain and warmer temperatures. However, overnight temperatures should allow for some limited snowmaking. The week continues in an up and down pattern, with some warmer temps, but also some natural snow and great overnight lows for snowmaking. Snowshoe continues to target Friday as Opening Day for the 2009-2010 season, and with a little help from Ma Nature, we should make that date with a solid, sustainable base. Friday looks to be a cold day with natural snow in the forecast, a great way to kick off the season! But don’t forget, our fantastic early season Ski Free/Stay Free deal expires TOMORROW! So be sure to plan your Snowshoe escape today and take advantage of a free fourth night of lodging, free fourth day of lift tickets and free tickets for kids 12 and under. Think Snow!"

You heard her…if you’re into Snowshoe, then they will have a great first day going for them on Friday.

Ski Beech has a decent looking base on the "Powder Bowl" portion of their hill (more snow than that of Sugar this morning) so we’re thinking that they will be able to make their hoped for opening date of December 5th, Saturday.

Wolf Laurel hasn’t made any announcements as yet. We’ll try to get a word with Orville today. Ditto that for Bryce Resort in Virginia. Massanutten had previously announced that they would not BEGIN making snow until December 1st, so they won’t really be behind schedule if the cold air makes it in on Thursday as forecasted.

Wintergreen Resort had previously announced December 12th as an opening weekend so all is on schedule there. Ditto Canaan Valley which has December 11th as an opening date. We know that Timberline, Winterplace, Wisp Resort and Ober Gatlinburg want to be open right now, so they are sitting on ready and will open ASAP.

GOOD INFORMATION DOESN’T COME FROM ALL MEDIA OUTLETS OUT THERE! 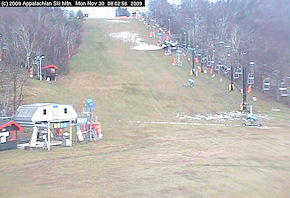 I was on my way into work this morning and heard a LOCAL radio station announcing the ski report for today and I could not believe what I was hearing – mostly because what I was hearing wasn’t accurate. Here I was listening to a radio station located IN THE MOUNTAINS talking about Appalachian having been "making snow since Thanksgiving". Okay it is kind of accurate to say that App DID make some snow Thanksgiving evening and into Friday morning, but that was about it and they have almost no snow on the slopes as of this morning. They also reported that Beech was making snow and while Beech DOES have that comment on the front of their website, what they mean is that they are making snow at every opportunity in preparation for an opening. However, they are not making snow this morning as it was 39° at 8am this morning.

I received a email from a newspaper contact of ours over the Holiday break asking, "Hey Mike, since none of the ski slopes have been able to make snow yet, when do you think they will begin and get open?"

Twice recently I have been asked by people who should know better, "When will the ski areas begin to BLOW snow?"

First off "ski slopes" don’t make snow – people do – and there’s been a LOT of snowmaking happening around the Southeast and Mid Atlantic and without it Cataloochee and Sugar would not have been open this past weekend.

Second, the snowmaking crews at all of our resorts don’t BLOW snow, they make snow and they make snow better than any other ski region in the United States.

SO NOW WE WAIT…

After some rain from now through Wednesday night we’re seeing the promise of some MUCH colder air that should begin filtering into the region on Thursday. There is some chances of wet snow tonight but most of the region will see rain. The higher elevations into West Virginia and Maryland should be able to eek out some snowmaking tonight and it will be borderline for Tuesday night. However the really cold stuff comes in on Thursday with some chances of snow, particularly on Friday into Saturday. More importantly right now is the fact that temperatures are forecasted to drop into the TEENS and low 20s Thursday, Friday and Saturday nights and THAT will make for LOTS of snowmaking! One of our long range forecasts shows cold temps Saturday and Sunday that might allow for around the clock snowmaking ops.

We received SEVERAL VIDEO SNOW DANCES over the weekend and we’ll be posting those and a winner on Monday or Tuesday. If you have not sent yours, you could win a FREE SKI GETAWAY! Check out the announcements on the front page and enter today! Send your Snow Dance videos to [email protected]

That’s it for today. Check the SNOW REPORT for more news and have a great day! Send your comments, trip reports, photos and videos to [email protected]

Previous Post
Sugar Mountain Offered Good, Early Season Conditions on Friday and Saturday – Photo by Southern Skiing
Next Post
Smiling Faces Prove that it’s all about Perpective When it Comes to Having Fun