STILL WAITING FOR THE SNOWGUNS TO CRANK UP 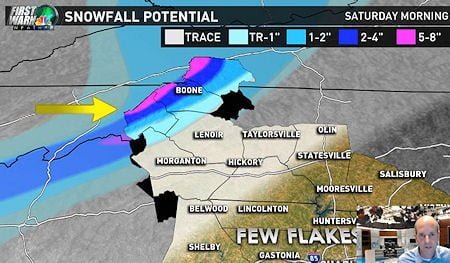 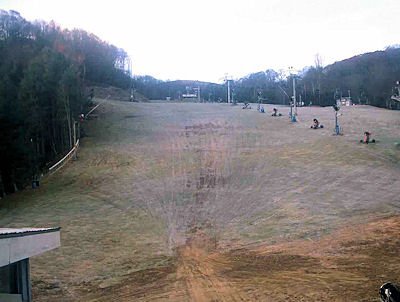 First to the most noteworthy news of the morning – the snowguns at Sugar Mountain Resort in Banner Elk AND those at Cataloochee Ski Area in the beautiful metropolis of Maggie Valley lay dormant this morning.

I had actually kind of thought that the temps MIGHT dip low enough that we’d see them running this morning and I had charged up all my drone batteries and equipment and was planning on launching from atop Hawksnest to give you guys a real, bird’s eye view of snowmaking.  We’ll do that when it happens, however it now appears that the snowmaking plants at both Cat and Sugar won’t start blasting the slopes until perhaps this evening…and it COULD even be overnight before we see them operating.

When it happens, we’ll have some cameras aimed and ready to share with you guys. If any of you are over at Cataloochee and could snap some photos or videos for us – that would be awesome.

In case you’re wondering – we saw 34° at 8am this morning at both ski areas.

NOW TO THE LATEST WEATHER NEWS…

On Thursday Brad Panovich of WCNC News Channel 6 in Charlotte (and of SkiNC and SkiSoutheast fame) AND Herb Stevens AKA “The Skiing Weatherman” both released weather forecasts for this impending “winter storm” and Herb commented on the season as a whole. Both videos are posted and can be seen at:

Both videos are certain to excite our crowd! Brad provided lots of commentaries on how this Halloween Weekend storm should dump some good snows on our North Carolina mountain ski resorts (maybe 6″ or more) and Herb reported, “…in all the years that I’ve been making long-range, seasonal forecasts I have NEVER seen ALL of the factors and indicators that I study line up with the same idea the way that they have this year. NEVER.”

He went on to say, “A weak El Niño will be the main driver of this winter’s weather. When you combine that influence with low solar output, warm water in the northeastern Pacific Ocean, easterly winds at the stratospheric level over the tropical Pacific and several other factors – the forecast is straightforward. It will be SNOWY and COLD.”

Herb added this nice, last bit of color, “That’s not just a pipe dream of a guy who loves to ski and ride – that’s my forecast for this season.”

WHAT’S THE LATEST ON THE STORM??? 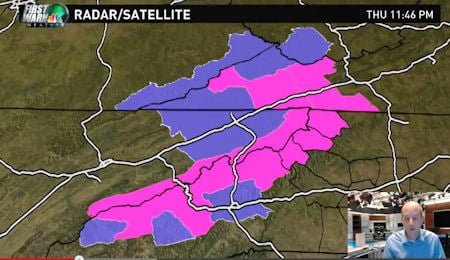 Brad Panovich is so excited he can barely contain himself. He provided a GREAT update about 20 hours ago and then late last night (Thursday night) he posted his latest storm update. This was posted AFTER his 11pm on-air, news update.

He was funny as hell as right off the top of his video update he stated, “First of all guys STOP checking these stock, iphone app weather apps for information. It drives me nuts. Those are automated apps.”

He then added, “Let ME tell you how things are gonna unfold.”

Watch the video for all the details – but Brad says that the Smokies (around Mount Leconte which overlooks Ober Gatlinburg) could see 8-10″ of snow.

Brad is forecasting 5-8″ along the North Carolina / Tennessee line and perhaps 2-4″ in Boone around Appalachian Ski Mountain.

For those thinking that this storm will be one of those pristine snows that are perfect for skiing – think again. Snow is SNOW and we’re all excited about it and we still think that Cataloochee and Sugar will open if not but for a day or two. However the winds will be howling on Saturday with gusts up to 50 mph! Expect 20-30 mph winds as a norm so if you’re going to hit the slopes, be prepared for a windy, cold, wet snowy day.

Again you can check out ALL three weather videos at:
https://www.skisoutheast.com/video-forecast/

The last three videos in the sequence are each of Brad’s and Herb’s forecasts.

Also be sure to “stay tuned” to www.ResortCams.com for all of the LIVE ACTION on the slopes. You’ll be able to see when the snow guns crank up and when the first flakes fall.

Stay warm peeps. It should be an exciting Halloween night and weekend.