Still Plenty of Terrain to be Ridden!

Good Monday morning and I hope everyone had a good weekend. I know I had a great one myself as I was pretty busy with a variety of things. Friday after work, I was snowmobiling in 20 degree weather up near Beech (thanks Mike). Saturday, I was snowboarding in 50 degree weather at App and yesterday I was riding my new Trikke (look it up they are pretty cool) in Charlotte where it was in the low 70’s. That’s March weather in North Carolina for you.

It is the start of another work week and I don’t know about you guys, but I am not fully awake yet. I haven’t adjusted to daylight savings time. Driving up from Charlotte this morning, it was dark the entire way up here. Combine that with the fact that I didn’t have my coffee this morning, and I’m still trying to get going right now.

I also think that I’m a little bummed this morning as we had a few more resort closures over the weekend. Bryce, Canaan Valley, and Beech all closed up shop for the season yesterday. I don’t know about Canaan or Bryce, but Beech had some events and festivities to celebrate another solid season up there. Pond skimming and some live music took place up there this weekend as a lot of skiers and snowboarders got in one final day at 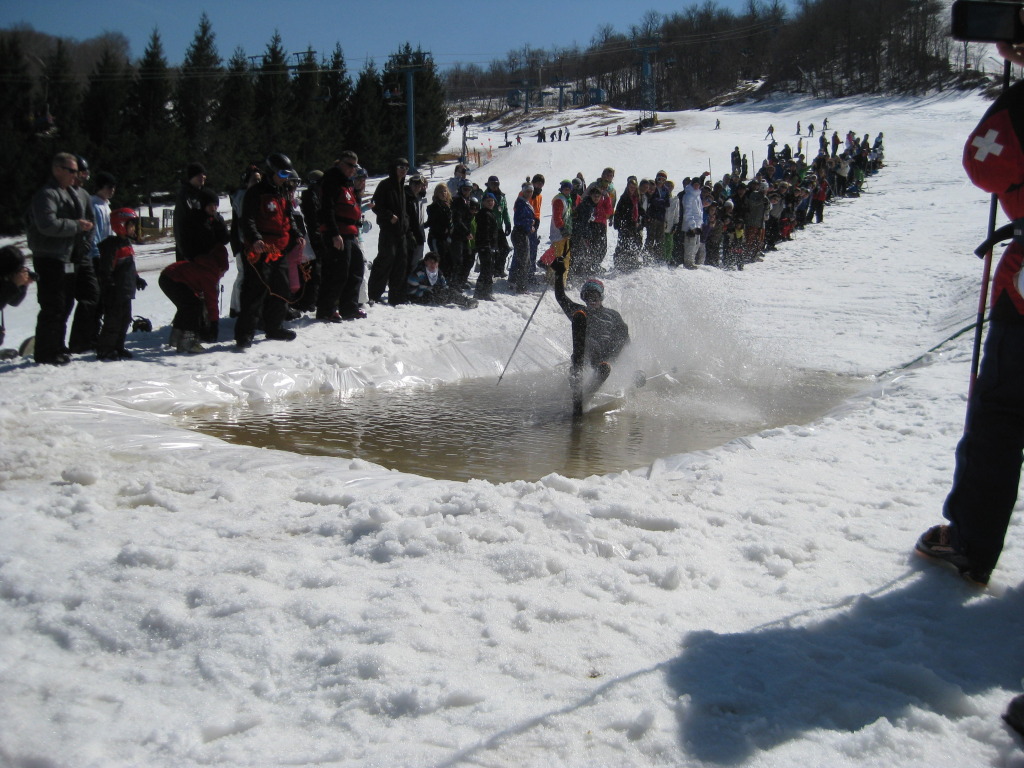 Beech until next season. It looked and sounded like a really good time. Head on over to the messageboard and check out the multiple trip reports from up there on Saturday if you want to see some pictures and read about what happened.

<<<It was a good time this weekend at Beech as they ended their season on a high note, with some pond skimming and live music.

It’s been another great season at Beech, as they were open for skiing and riding for 100 days!  Two or three weeks ago I was really worried about how long they would make it, especially considering the recent weather. They were able to stick it out though, and with good conditions at that. Almost the entire mountain was open on the final day for the second straight year. Being open for 100 days in the Southeast is no small feat, so congrats to them on another great year.

We still have 8 ski areas still open for business in the Southeast (7 if you don’t include Massanutten as they are closed until Friday). The resorts that are open are still in great 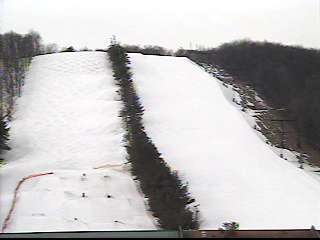 shape and have plenty of trails and terrain to ride. We only have a couple more weeks left of skiing and riding to make sure to get out there and hit the slopes while you can. I know it’ll be about the 2nd week of April before I am already missing the snow!

Wisp still has some excellent conditions right now!  The terrain park looks good and there are even some moguls left for the skiers.>>>

Looking at the resorts…

Appalachian Ski Mountain – 41°- Open today on 100% of the mountain with a groomed surface. App is in great shape right now and they will continue to be that way through their closing date, which is next Sunday. They will have night skiing and ice skating is also open.

Sugar Mountain – 44.3°- Open today on 100% of the mountain with a loose granular surface. March madness rates continue to be in effect, saving you 25% on lift tickets and rentals. They still have night skiing and riding going on as well. Tubing and skating have closed. Sugar hasn’t announced a closing date yet, but I wouldn’t be surprised if they remain open until next weekend.

Snowshoe Mountain – 26°- They are open on 41 of 60 trails today with a groomed surface. Silver Creek is closed for the season now, thus the reason for only 41 trails being reported as open. That said, the entire Snowshoe basin is still almost 100% open. Messageboard member brookbarrel posted some pics from up there on Saturday and man it looks pretty sweet. Conditions are still really good up there as the grooming team will continue to lay down some awesome corduroy between now and their closing date, which is next Sunday. Lodge with them anytime from March 21st-27th and you will receive free lift tickets. That is a very good deal and a great way to end your season on a high note. Also, you can still purchase your season pass for next year by April 30th and save up to 28%.

Wisp Resort – 29°- Open on 27 of 32 trails today with a groomed surface. Lift tickets are just $29 today per midweek special. They will not have night skiing tonight, but ice skating and tubing will both be open from 5-9pm tonight.

Massanutten – 30°- They will be closed this week but will reopen on Friday for skiing and riding through the weekend. However, their Z-Tour Zip Line will be open this Tuesday through Thursday.

Wintergreen – 25° – Open today on 22 of 26 slopes today with a groomed surface. They will only be open for day sessions for the rest of the season. Tubing will reopen on Saturday. They plan on being open until March 26th, weather permitting of course.

Timberline – 27°- Open today on 34 of 39 trails with a groomed surface. They are saying the backcountry is still open with a 1-9” base. Don’t dig into hard with an edge on that! Night skiing will only be held on Saturday.

Winterplace – 29°- Open today on 100% of the mountain with a groomed surface. They still have one terrain park open and tubing is going on today as well from 1-5pm. They are done with night skiing for the season. Winterplace will close for the season this Sunday.