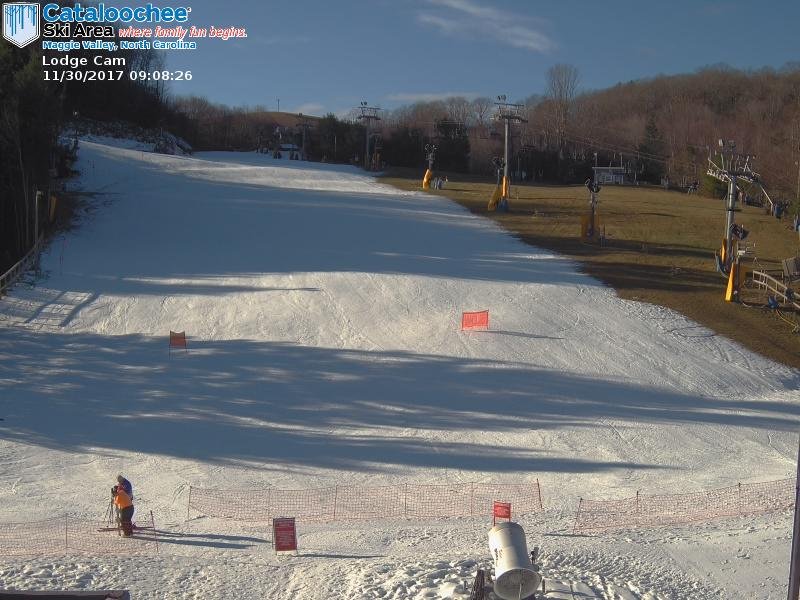 Welp, I’m really starting to feel like I’m repeating myself lately and that’s going to continue again today.  As a result, today’s post is probably going to be a short one as not much, if anything, has changed since yesterday.

It’s another morning with temps in the 30’s and 40’s at our 4 open ski areas.  No snowmaking took place last night and any significant snowmaking looks to be several days off when that huge pattern change I’ve been talking about all week arrives.  We might see a night or two here and there with some marginal temps, but the really good snowmaking conditions won’t arrive until the middle of next week.

As a reminder, here is what we’re working with today.

Look for those same numbers to remain throughout the weekend as the blah weather continues.  Also, have some solace in the fact that we’re not the only ones off to a slow start.  There are many ski areas in the western part of the country who are also off to a rough start to the season.  I was checking out stuff in Utah and they are in the midst of one of their worst Novembers on record.  It also cracked me up when I read an article about Alta and how in one of their worst years they “only” had 300+ inches of snow.  Hilarious.

Anyways, we’re still on schedule for a drastic turnaround next week.  I follow a bunch of meteorologists on Twitter and my timeline is lit up with people talking about it.  A few of the ski areas are starting to talk about it on social media as well.  A lot of the resorts don’t open until the middle of December no matter the conditions, so the timing couldn’t be better.  Here’s a shot of the snowmaking progress at Canaan.  They are one of those resorts opening in a few weeks.

We just have to stay patient in between now and next week as we wait for Old Man Winter to return.

If you are in the vicinity of Beech Mountain tomorrow and are a craft beer fan, then head on up to the resort as Beech Mountain Brewing Company is re-opening for the winter.  All I know is they better have a good IPA for me to sip on this year.

Snowshoe posted a pretty sweet video yesterday highlighting what their progression park looks like.  It’s rather impressive to see just how good it looks up there right now.  Can’t wait to get up there after Christmas!

That’s about it for today peeps.  A slow news day!  Check back tomorrow as I’ll get you ready for the weekend.