Welcome to Tuesday everyone. I know I said this yesterday but I’ll say it again, I still have not adjusted to the whole daylight savings time thing yet. My alarm went off at 6:50 this morning and I thought I had set it for the wrong time. It was still pitch black outside and I thought I could get some more shuteye, but then I quickly realized I had to get up. The fact that it is cloudy out didn’t help either, as it just made it darker. It’s going to take me a few more days to adjust I think.

It has been nice though seeing it get dark later. Once this dreary weather moves out of the region I definitely plan on getting a night session in at Sugar or App. I don’t get to ride in the daytime hours during the week anymore, so it will be nice to be on the slopes for a couple hours with daylight before getting to watch the sun set. It really will be twilight boarding.

Speaking of weather, it looks like today might be a good day to stay inside. The majority of the region is going to see some of the underdeveloped stuff as a low pressure system passes through. Up in Virginia, Wintergreen has decided to stay closed until Thursday as a result of the inclement weather. Farther north though, Snows 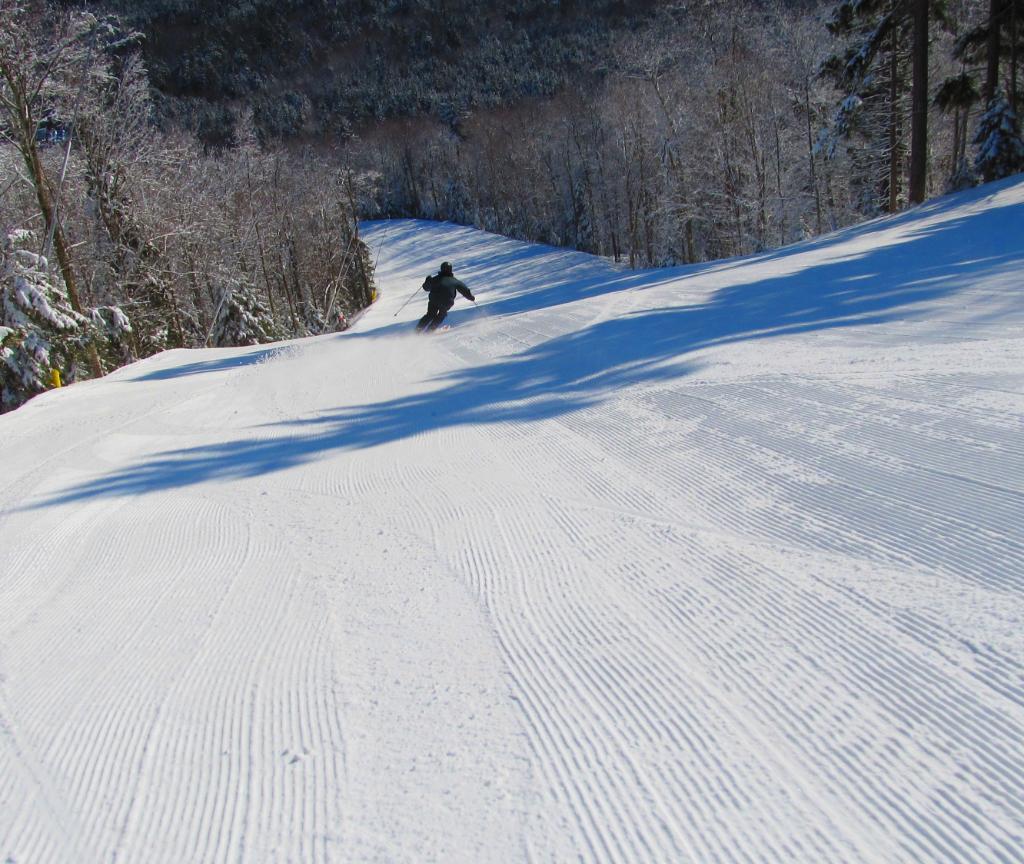 hoe could see up to 3 or 4 inches of the white stuff as it will be colder up that way. Those guys have seen some pretty good late season conditions over the past couple of weeks. Brookbarrel posted a trip report from this past weekend up there and man did it look good! It looked more like mid season conditions than mid March.

<<<Conditions this past weekend at Snowshoe looked great!  They have more snow in the forecast.

By Thursday, all of this stuff will be cleared out and we will see some awesome weather for the weekend. It truly will be spring skiing as most ski areas will see temperatures in the high 50’s. Coverage is still looking good at the places still open so there will be no reason to not get out and enjoy some late season skiing and riding.

There’s really not a lot going on this morning so that’s all I have for today. Here’s a look around the region…

Appalachian Ski Mountain – 35°- Open today on 11 of 12 trails of the mountain with a groomed surface. The AppalJack terrain park is the only area not open and I’d imagine that they are rebuilding that park. I forgot to mention yesterday that their late season rates are now in effect and will remain so until they close next weekend. This weekend they will be hosting the final Ladies Park Night and Shred for the Cup events of the season. Ice skating is open and will conclude for the season on Sunday.

Sugar Mountain – 34.5°- Open today on 100% of the mountain with a loose granular surface. March madness rates continue to be in effect, saving you 25% on lift tickets and rentals. They still have night skiing and riding going on as well. Tubing and skating have closed. Sugar hasn’t announced a closing date yet, but I wouldn’t be surprised if they remain open until next weekend. Just a reminder that they will be having an Easter Egg hunt on the slopes this Sunday, March 20th.

Snowshoe Mountain – 25°- They are open on 41 of 60 trails today with a groomed surface. Silver Creek is closed for the season now, thus the reason for only 41 trails being reported as open. That said, the entire Snowshoe basin is still almost 100% open. Messageboard member brookbarrel posted some pics from up there on Saturday and man it looks pretty sweet. Conditions are still really good up there as the grooming team will continue to lay down some awesome corduroy between now and their closing date, which is next Sunday. Lodge with them anytime from March 21st-27th and you will receive free lift tickets. That is a very good deal and a great way to end your season on a high note. Also, you can still purchase your season pass for next year by April 30th and save up to 28%.

Wisp Resort – 32°- Open on 29 of 32 trails today with a groomed surface. Today is student day, where you can receive a $21 extended day lift ticket with a valid 2010/2011 student ID. They will not have night skiing tonight, but ice skating and tubing will both be open from 5-9pm tonight.

Massanutten – 32°- They will be closed this week but will reopen on Friday for skiing and riding through the weekend. However, their Z-Tour Zip Line will be open this Tuesday through Thursday.

Wintergreen – 27.5° – They will be closed today and tomorrow for skiing and riding before reopening on Thursday. Tubing will reopen Saturday.

Timberline – 29°- Open today on 34 of 39 trails with a groomed surface. They are saying the backcountry is still open with a 1-9” base. Don’t dig into hard with an edge on that! Night skiing will only be held on Saturday. Their Rail Jam finals are Saturday as well.

Winterplace – 34°- Open today on 100% of the mountain with a groomed surface. They still have one terrain park open and tubing is going on today as well from 1-5pm. They are done with night skiing for the season. I reported yesterday that Winterplace would close this weekend, but this morning they are saying on their website that next week’s hours are to be determined still. We will see.