SOME SNOW and LOTS OF COLD TEMPS INVADE THE MOUNTAINS!

The good news first – it’s snowing across much of the region and it is VERY cold as of 7:30am. On Tuesday we showed you the readings across all of the Southeast and Mid Atlantic ski areas and this morning the temps are about 20 degrees colder than 24 hours ago. Here are some quick reports and you guys can click to view any ski area links and see the reported lows this morning or that information is also on the snow reports page.

An example of the huge swing in temperatures is to note that Tuesday morning’s 7:30am temp at Cataloochee was 51°. Just 24 hours later this morning it is 27°. Snowshoe’s Tuesday AM temp was 43° and this morning they are at 24°! (A couple of you have already emailed us asking about Cataloochee’s reporting of 54.5° this morning. There’s probably a glitch there. It isn’t 54°. It is 27°.)

As previously mentioned we are seeing some snow showers reported around the region and we’ll talk about that as more snow is expected mostly the further north you go into West Virginia for today. The National Weather Service is still holding onto their forecast for as much as 3-5" of snow for the Snowshoe area. Canaan Valley and Timberline are likely to see about the same. Wisp Resort in Maryland is forecasted to pick up perhaps 4" of snow today through Friday with some lingering snow even into Sunday.

Little or no accummulation is expected into the North Carolina or Virginia mountains, but it is nice to see some snow flying and especially nice to see the ushering in of consistently cold temperatures.

Before we get into the snowmaking reports and ski area openings, etc I HAVE to talk a moment or so about the AMAZING RAIN that fell on Tuesday and into last night.

I watched the local radar maps for much of our coverage area yesterday and last night and there was a widespread zone of heavy rain that fell across the entire region. We’ve received a few official reports of around 2 to 2.5" of rain that fell into portions of Virginia and West Virginia. David Lesher’s Davis, WV weather report only reflects .62" of rain on Tuesday, but that will change once he posts the December 1st readings as a lot of the rain fell around and after midnight.

Some of the CoCoRaHs guys are posting some big numbers this morning. For example:

If only we’d have had the cold temps WITH THAT MOISTURE! 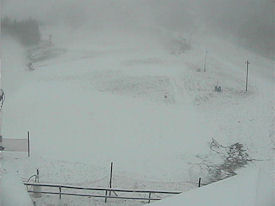 There is NO QUESTION that the heavy rains had an adverse effect on the snow that was already made over this past weekend at most all of the ski areas.

Beech Mountain Resort looked ready to open the other day and this morning even with a reported 1" of new natural snow and their snowguns cranking, you can tell that they’ve got some snowmaking to do before they’ll be ready to open. 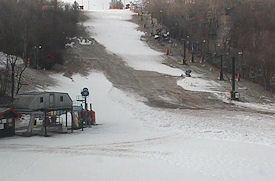 Appalachian Ski Mountain at 8am Wednesday>

The picture is even more vivid at Appalachian Ski Mountain this morning. Literally on Monday AM they looked pristine with snow covered slopes but all that rain paid a toll. However it is 26° at App right now and they’ll be certain to be making snow momentarily and it won’t take long with these great temps that are forecasted for them to make enough snow to cover up and open for Friday. 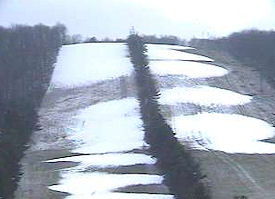 Wisp Resort had Squirrel Cage and other slopes looking just about ready for prime time the other day and as you can see by this AM webcam shot they are now awaiting the colder temps to make snow. It is a reported 33° there this morning according to the NWS. Our weather station is reporting 28° so no doubt they will be making snow momentarily as well.
That story can be repeated pretty much up and down the Southeast and Mid Atlantic mountain areas. The West Virginia ski areas, Wisp in Maryland and most of the North Carolina ski areas have been making snow whenever possible. Cataloochee and Sugar have been operating as they could, and even after some heavy rains – the snowguns are on at many ski areas and Sugar is open for skiing and snowboarding today.

Cataloochee is already making snow, as is Sugar, Snowshoe and several other areas. We’ve posted a nice shot from Wilson King’s Beech Mountain Chalet Rentals webcam up on Beech Mountain from this morning. It is very wintry looking up there and we’ve heard reports of Beech Mountain Parkway being slick. We’ve been watching traffic flow on it though, so the drive is easy enough if you take your time and have good tires, etc.

Check out the LIVE CAM SHOT at Beech Mountain this Morning

If you’re looking for some great Beech lodging be sure to pay Wilson’s website a visit at www.GoBeech.com . Tell him "thanks" for providing the LIVE CAM shot up there. He’ll appreciate it.

The Hwy 184 BANNER ELK LIVE CAM is showing some show this morning although the roads are crystal clear in Banner Elk.

Here’s a quick tour of the region:

Ski Beech / Beech Mountain Resort – 20° – They are making snow now as of 8:30am and they’ve announced that they will be opening for the season on Saturday, December 4th. That’s great news for Beech fans.

Sugar Mountain – 18° and they are OPEN and making snow. They are not reporting any accummulation this morning but we are officially reporting one-half inch of new snow. Sugar is operating one lift and two slopes from the 3/4th station.

We’re touring the region’s resorts and weather data and even though we’ve witnessed milder temps at the Virginia ski areas thus far through November, this morning’s low thus far at Bryce Resort as of 8:44am is 44°. Temps are falling, but they’re just now filtering into the Virginia Mountains. It’s snowing in NC and West Virginia, but 44° at Bryce. Massanutten is reflected 49° this morning. Wintergreen is showing a 35° reading!

Massanutten Resort has been making some snow whenever possible and Steve and their crew up there wanted us to share, "Massanutten hopes to open the Snow Sports Area early in December. We have started the snow-making process. Our average opening date is December 10th."

Wintergreen Resort – 33° – Anne Marie and their team posted, "SNOWMAKING WEATHER RETURNS! Temperatures on the mountain are falling rapidly this morning as a cold front approaches. Temps started the day at around 50 degrees and have already fallen to 34 degrees as of 8am. Overnight lows are forecasted to drop into the teens allowing our snowmaking system to fire back up and lay down some more white! We are excited about the cold air and are pumped to start sliding very soon. Opening Day is only 2 weeks away; we plan to ski, ride and tube on December 10th. Cross your fingers and toes for cold weather. If Mother Nature cooperates, we will try and get you on the snow before the 10th."

As you can probably tell by now, we’re kind of touring the region this morning South-to-North. David Lesher of Davis Weather has now posted his morning update and they are reporting a TRACE of new snow and 1.41" of rain since midnight.

Canaan Valley is reporting 28°so the snowguns are back on preparing for their December 11th opening.

Ditto Timberline Resort as they are reflecting 28° and they are planning to open December 9th.

Snowshoe Mountain is reporting 27° this AM and they are making snow and have seen a TRACE of new snow this AM so far. As mentioned earlier they are expecting up to 5" of natural snow today through the next few days and they have announced their opening day as December 10th. They should have some awesome conditions by that time with all the cold temps.

Winterplace Resort is at 28° this morning and they will be making snow and plan to open December 11th.

Wisp is now at 25° as of 9am but the snowguns are not on as yet. They will be soon. We talked with Michael Valache from Wisp the other day and he shared that they were all getting very excited to open in the next weekend or so. We’ll get with Marketing guru Lori Epp for some updates as soon as we can.

Ober Gatlinburg is reflecting a 31° temp this morning and no snowmaking quite yet. They have made some snow over this past weekend and look to open as soon as possible.

Now that the cold temps are kicking in, we took a renewed look at the long range forecast and things look good all the way through at least the middle of December. Today is December 1st and as if on cue the forecast looks a whole lot more like we need it to for some great snowmaking. Highs across the North Carolina mountains from today through Tuesday look to be forecasted to stay in the 20s and 30s…and lows are forecasted to be in the teens and 20s through the period. Tweak that a notch colder into the WV resort areas. That will make for a lot of around the clock snowmaking ops for the talented snowmakers of our region.

We’ll need all that rainfall that fell and drained into the holding pnds and lakes to make a mountain full of snow over the next couple of weeks. The good news is that we should now watch as resorts begin opening more and more slopes over the next weeks.

We’ll try to get you some photos of the snow that falls in the area and post them up as possible today.