Some Resorts Look Great; Some, not so much…yet! 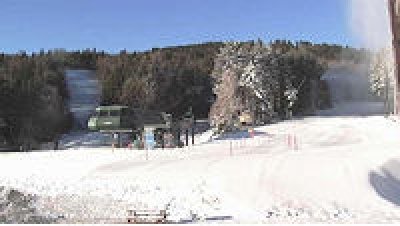 We'll expect to hear from Meteorologist Brad Panovich tonight and we'll see what he has to say about the forecast just two days since his last one that hinted that the European and GFS models were forecasting some good chances of significant snows into mid week – next week.

As was forecasted, we HAVE had some cold, snowmaking temps over the last 36 hours or so and many (but not all) of the resorts were able to make snow.

LET'S LOOK AT THE CURRENT SITUATION…

Sugar is back open…again. Cataloochee is the other NC ski area that is open and both are making snow this AM. Appalachian Ski Mountain in Blowing Rock and Beech Mountain Resort are also BOTH making snow and hoping to open on Friday. Sugar looks a little thin down at the bottom however it is a testament to great snowmaking technology that they are even open today.

Sapphire Valley was making snow this morning, and there's no word from Wolf Ridge as to whether they are or not.

Massanutten Resort in Virginia is creating a BLIZZARD of snow from their guns this morning. http://resortcams.com/webcameras-massanutten-base.php

Bryce made some snow up top, but the base is bare and no snowguns are running this AM. 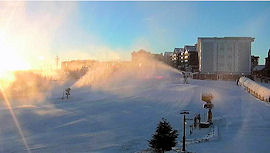 As has been the case so far this early-season – the West Virginia ski resorts are simply getting the more consistently cold temps. A look at the Snowshoe Mountain Boathouse Cam will paint the perfect picture of how nice Snowshoe looks this AM.
http://resortcams.com/webcameras-snowshoe-boathouse.php

If you're into corduroy, check out the Shaver's Center camera this morning before it's carved up.
http://resortcams.com/webcameras-snowshoe-shavers-centre.php

Timberline Resort may look the snowiest right now as they saw some nature snow and focused snowmaking makes for a white-Christmas look to things. Check it out at: http://resortcams.com/webcameras-timberline.php

COME DOWN OFF THE LEDGE…PART TWO…

For today, things look considerably better than they did a couple of days ago.  Cataloochee and Snowshoe will be able to maintain what they have and ALL of the same resorts that are making snow right now will be able to do it again tonight with lows in the mid 20s.  That will make for a nice Friday.

Past tonight we're not seeing snowmaking temps really at even the highest elevation resorts until perhaps NEXT THURSDAY, December 20th when around Banner Elk the temp is now forecasted to be around the 27° range. It NOW looks like the really cold (consistently cold) temps will come in behind that. December 21 & 22nd look very cold with lows in the low to mid 20s.  That is JUST IN TIME for Christmas-New Year ski Holiday. 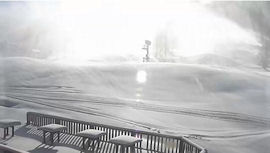 …Timberline Resort looks SWEET this AM!

AGAIN – as has been the case for the WV resorts all pre-season – the temps up around Snowshoe will simply be a bit colder with lows tonight and Friday night that will allow for snowmaking.  THEN they too will have to wait on cold air for a couple of days although not AS MANY days as things turn snowmaking-cold again Tuesday night, December 18th. There's some snow in the forecast right now for Tuesday night and then again Thursday.

Low temps in the low 20s are forecasted each night from December 18th-22nd (which the end of the long range forecast period).

Beyond that things look like they will, indeed, get into a more snowy and colder – consistently cold – pattern.

WHAT DOES THAT MEAN FOR THE RESORTS?

Look, I'm not Nostradamus, but I do have a little history here and for the most part I've been a friend to those of you who need a little reassurance that you should make or keep those reservations. I've never steered you wrong yet, have I?

The question of the DAY ALREADY has been "Hey, ya'll got snow up there?"

I JUST took a call from a guy in Wilmington, NC and his questioned was prefaced with, "I know you can't forecast the weather, but do you think there will be snow at Sugar around the 28th?"

We've taken more PHONE CALLS than ever and it's only December 13th… and that IS the question on everyone's mind.

Based on all the data and what we see right now, I think it is safe to say that ALL of the ski areas will be open, operating and in surprisingly great shape by Christmas Eve! That is based on the fact that MANY ALREADY LOOK GREAT and with things turning even colder around the 19th, things will undoubtably look great going into that Holiday week.

It looks to be one of those unbelievably, thankfully well-timed cold fronts that will allow things to be pretty awesome at the ski slopes.

As far as significant, natural snowfall – based on my novice skills as a weather geek, I'd say the hoped for mini-blizzard won't be making an appearance this coming Wednesday for most of the area. Snowshoe, Canaan, Timberline and Wisp Resorts will get the best chances for any kind of significant snowfall.  Resorts further south may see some "ambience snow" but not like we are all wanting to see.

According to Brad's forecast the other day THOSE SNOWS ARE COMING as a colder and snowier pattern should be in the mix for things after December 20th and beyond.

So keep the faith as things should start looking a LOT LIKE CHRISTMAS…or at least WINTER very soon. Right now we're seeing some borderline conditions at some of the ski areas that aren't even open yet, and obviously there are some ski areas that have not even been able to get started with snowmaking. but let's get past these next FIVE DAYS and things should get started in earnest.

If it doesn't happen then – THEN I WILL WALK OUT ON THE LEDGE WITH YOU!

While we're waiting on Brad's forecast tomorrow morning, I thought you guys would like to see what THE OLD FARMER'S ALMANAC is calling for. Bear in mind that they pretty much NAILED November and early December thus far.

I don't know about you guys but I'd be down with that forecast and then remember by all accounts February is meant to be a very cold and snowy month as this season has been forecasted by many to be a "back-loaded" winter.

That's it for me today.

Follow us on Twitter and Facebook…please. SUBSCRIBE to our SkiMail Mailing list at the bottom of this page as ALL OF OUR WINNERS for lift passes and vacation giveaway will be chosen ONLY from those who SUBSCRIBE. It's easy and we commit to NEVER sell or give your email address to any 3rd party.

We'll only email you when announcing contests, lodging and equipment discounts, snow falling and things we know you'll want to hear about.  SUBSCRIBE by scrolling to the bottom of THIS or any page of the website.