It’s Friday! We’ve almost made it to the weekend. Here in the High Country we have been gifted an end of the work week present as it is currently snowing outside! For the second time this week now I can say that. I started off the work week with snow and now I get to end it with one. That is awesome!

Down and around in Boone, it’s only a dusting to no more than an inch in spots. While that may not be a lot, it was still enough to cause me to slide around a little bit when pulling into the office this morning. I guess I was coming in a little too hot. 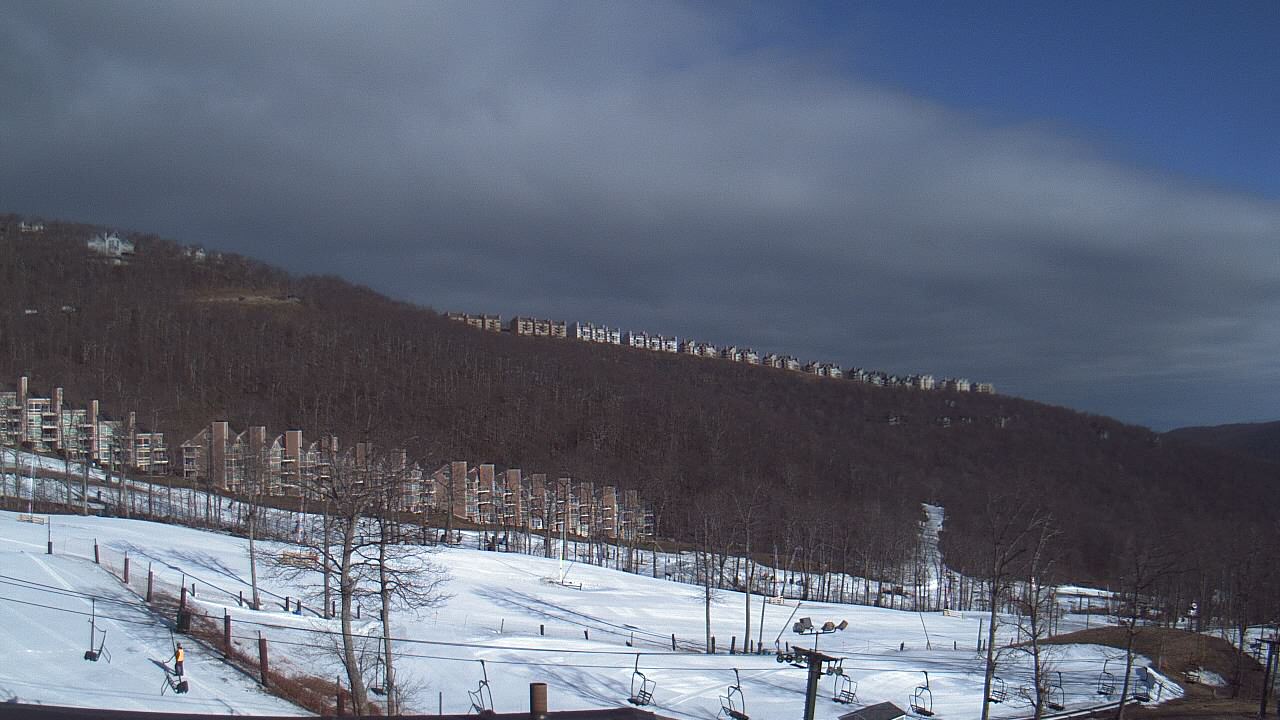 <<<Wintergreen sure looks good this morning after they made some snow last night.

Most of the ski areas in the region are reporting new snow. The Virginia resorts seem to have missed out once again. Those guys have been so unlucky this year as it seems the snow can’t quite reach them. They still are going strong though which goes to show you how impressive their snowmaking operations are. Wintergreen was able to turn on the guns last night and lay down some fresh manmade granular. They plan on continuing to make snow when the weather permits. Kudos to them. 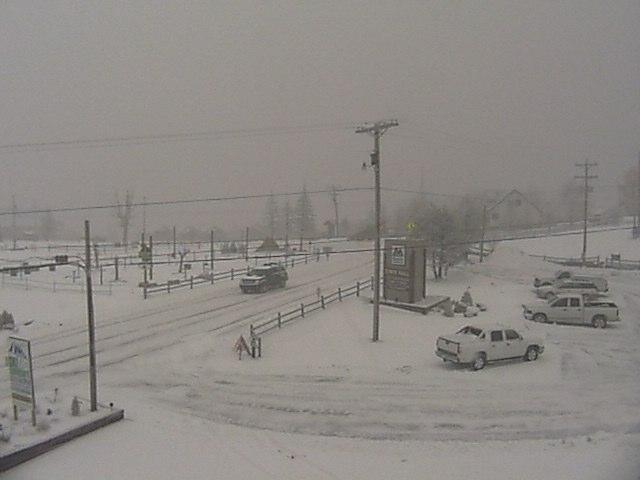 <<<If definitely doesn’t look like mid-March on Beech Mountain this morning!

Here in North Carolina, Beech Mountain is reporting 4 inches of new snow. It looks like a winter wonderland up there this morning on the cams. I’m jealous of my buddy Kevin (messageboard member jamsandwich) as he was going skiing up there this morning. He might be able to get a few powder turns in here and there. I’m sure he will take some pictures for us to see later. As I mentioned yesterday, Beech will close up shop for the season on Sunday. This new snow should make for a really good final weekend of skiing and riding up there.

Sugar Mountain is reporting 2-3 inches of new snow. They are still 100% open and I’m sure the conditions up there today will be superb. App received an inch of snowfall and they also turned on the guns last night. They are blasting away at the slopes this morning and I’m sure they will do so again tonight making for some great skiing and riding all weekend. I plan on getting up there tomorrow and I am pretty stoked to do so.

Up in West Virginia, Snowshoe is reporting 5 inches of new snow. It’s been a wacky week of weather up there. Mixed in with all the underdeveloped stuff this week, they have received 15 inches of snow! That’s pretty crazy. Canaan and Timberline also have some fresh, as they each received 3.4 inches of snow.

Basically, all of the resorts still open in the Southeast are still in really good condition and this snow in the past 24 hours has only helped. The last few weeks have been kind of rough weather wise, but we still have plenty of trails and terrain to choose from. The weather should clear up later today and this weekend is looking like some great spring skiing and riding conditions. Get out there if you can as we only have a couple more weeks to do so!

That’s all I have for today. Mike will keep you guys updated this weekend and I’ll talk to you guys Monday. Here’s a look at the resorts…

Appalachian Ski Mountain – 25°- Open today on 100% of the mountain with a groomed surface. As mentioned, they did receive an inch of new snow and made some last night as well. Conditions should be fantastic at App today. Ice skating is also open today.

Beech Mountain Resort – 17°- They are open today on 13 of 15 trails with a groomed surface. They received 4 inches of new snow! Don’t forget that their discounted March rates are in effect. You can get a full day lift ticket for just $20 and today that is a really good deal. They will be closing Sunday and will have festivities tomorrow to celebrate another great season.

Sugar Mountain – 22°- Open today on 100% of the mountain with powder and frozen granular surface. They are reporting 2-3 inches of new snow. They also have March madness rates in effect until the end of the season. Lift tickets are 25% off. Their Spyder Sample Sale is still going on as well. Tubing is closed today but skating is open.

Snowshoe Mountain – 18°- They are open on 59 of 60 trails today with a groomed and frozen granular surface. They have received 5 inches of snow in the past 24 hours! Here’s what they have to say – "Wow, what a change in the weather! Since Sunday we’ve seen 15 inches of SNOW! Another 5" of snow fell throughout the late afternoon and overnight hours yesterday and snow continues to fall lightly this morning. Snow is expected to continue throughout the day with an additional 1-3" of accumulation expected before the day is over! That means we should have an amazing day of skiing and riding today, and tomorrow we’ll enjoy all that new snow with some sunny skies and slightly milder temperatures before more snow is possible again on Sunday!

Our grooming team did get out very early this morning after we laid off the grooming overnight Wednesday. But with steady snowfall throughout the morning there should still be plenty of fresh piles to find. We did leave Bear Claw and Flying Eagle ungroomed at the Silver Creek area, so if you’re a true powder hound, that’s where you’ll want to head first thing this morning! But with continued snowfall those powder stashes should refresh themselves throughout the day! And there’s lots of room to play out there today, as Snowshoe continues to be nearly 100% open, skiing and riding on 59 of 60 slopes and nearly 244 acres of skiable terrain. Although the Silver Creek area will close for the season following the day session on Sunday, we don’t anticipate losing any additional terrain, at least for the foreseeable future.

Don’t forget, tonight and tomorrow night are your last chance to enjoy night skiing this season. The tubing hill will also close for the season following Saturday’s session on the 12th. But value season pricing is just around the corner, and with this new snow we’ll be sure to be providing great conditions through the end of the season, scheduled for March 27th. And we have more great events coming up, including WV SKI FREE day on Sunday, March 13th and our Last Hurrah party and pond skimming event on Saturday, March 26th. Visit snowshoemtn.com for a complete list of events and great deals for the remaining 2 weeks of the season, including 50% off lift tickets when packaged with lodging during a stay between March 18th and 27th. That means you’ll enjoy the region’s most open terrain for just $26 a day!

Finally, we can’t forget to mention that 2011.2012 season passes are now on sale. As the season winds down it’s time to think ahead. If you purchase your 2011.2012 season pass by April 30th you’ll save up to 28%. Plus, purchase before the end of THIS season, and come up and enjoy your last fix of fresh snow, and you’ll SKI FREE! That’s right, purchase next year’s season pass now, and SKI FREE for the remainder of this season! There’s still great snow to enjoy and plenty of time to do so. Visit snowshoemtn.com or call 877-441-4386 to purchase your passport to Snow Country!”

Wisp Resort – 27°- Open on 27 of 32 trails today with a groomed surface. They have received an inch of new snow in the past 24 hours. There will be tubing and skiing tonight. Ice skating is also open today.

Massanutten – 36°- Open today on 12 of 14 trails with a groomed surface. They will be skiing and riding today from 9am until 9pm tonight. Just a reminder that this Sunday is Heroes on the Hill Day, where military personnel receive a free lift ticket.

Wintergreen – 24° – Open today on 23 of 26 slopes today with a groomed surface. They were able to make snow last night. They will be having night sessions and tubing is open today. They also have 30% off regular season rates this weekend.

Canaan Resort – 27°- Open today on 22 of 39 trails with a frozen granular surface. They have received 3.4 inches of new snow in the past 24 hours! The new snow should make for a fun final weekend of riding as they will be closing up shop for the season on Sunday.

Timberline – 27°- Open today on 34 of 39 trails with a powder surface. They too have received 3.4 inches of new snow. They will be having night sessions tonight, tomorrow, and Sunday night.

Winterplace – 24°- Open today on 100% of the mountain with a groomed and frozen granular surface. They have received an inch of new snow since yesterday. March madness rates are in effect and today you can get a free lift ticket with the purchase of rental equipment and a valid West Virginia or Virginia ID.

Bryce Resort – 38°- Open today on 6 of 8 trails with a groomed surface and they will be having a day session only. Bryce will close for the season on Sunday.

Previous Post
A Crazy Day of Weather
Next Post
It’s A Winter Wonderland on Beech Mountain This Morning!