Laura Parquette just got up with us to announce that Snowshoe Mountain in West Virginia picked up about 1.5" of natural snow and they cranked up their snowmaking equipment as well!

According to their official press release, they began making snow at midnight, which was about 6 hours before Cataloochee began making snow.  They will make snow as long as temperatures allow!

Here’s the official announcement that came from the mountain: 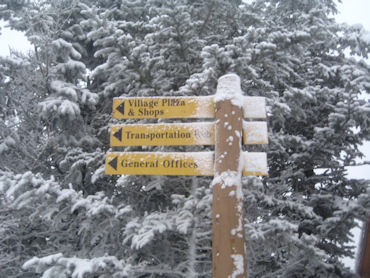 Snowshoe, WV—It seems as though we just bid adieu to summer, but winter has already arrived at Snowshoe Mountain Resort. The West Virginia ski area had 1.5” of snowfall this weekend, and flurries continued into Sunday morning. The resort also fired up the snow guns for the first time this season, complimenting Mother Nature’s efforts with its region’s-best snowmaking equipment.

Snowshoe is often the first resort in the mid-Atlantic and Southeast to begin snowmaking efforts and see natural flakes. With a peak elevation of 4848’ and a unique microclimate, the resort often sees colder temperatures and more wintry precipitation than the rest of the region. Snowshoe averages 180” of snowfall a year, and last year had a similar early start to the season with the first snow on Oct 28th. That snowfall kicked off one of Snowshoe’s snowiest seasons in recent memory, with a total of 209” falling before April was over. This season, advanced forecast models are calling for another cold, snowy winter in the mid-Atlantic, and Snowshoe could easily surpass the 200” again.

With a great early season jump on conditions, Snowshoe plans for a November 25th opening for the ski season, but may open earlier if conditions allow. Last season Snowshoe opened on November 21st, five days earlier than planned, after more than 40” of natural snow fell on the resort prior to that date.

With the excitement surrounding the year’s first snowfall, Snowshoe is currently offering some great early season deals, including a great 4th night free offer. Snowshoe’s Hot Deals can be found at snowshoemtn.com, and reservations may be made by visiting snowshoemtn.com, or by calling 877-441-4FUN.

• Snowshoe Mountain resort received its first snowfall of the season over the weekend.

• Snowmaking began at midnight Sunday and continues through Sunday morning

• More freezing overnight temperatures are in the forecast for later this week, and Snowshoe will make snow whenever possible

• The resort has tentatively scheduled Opening Day for the 09/10 Ski Season for Nov 25th, but may open sooner if conditions allow

• Last season’s snowfall total was 209”, including 67” in October and
November

• Forecast models are calling for a cold, snowy winter for the southeast region, including Snowshoe

For more details on all of Snowshoe’s early season operations and reservations, visit http://www.snowshoemtn.com  or call 1-877-441-4FUN.

Previous Post
Snowshoe Mountain receives one and a half inches of snow and begins making snow on October 18th!
Next Post
Woolly Worm Festival IS LIVE on HighCountryWebCams.com!