It’s Thursday! We’re over the hump and cruising for the weekend. My what a difference a day makes! It continually blows my mind – although it shouldn’t since I’ve lived in North Carolina for my entire life – that the weather can change here with the drop of a hat. It’s insane. Yesterday morning was downright BALMY compared to this morning. The temperatures this morning range from the upper teens to lower 20’s and that is without wind chill – and it’s a tad bit breezy in some locations this morning! Just to give you an idea of how drastic the temperature changes can be from one day to the next….yesterday morning at Appalachian it was 40° and this morning it’s 15° and at Sugar Mountain it was 36° yesterday and 13° today!! Those are some BIG drops!!

All of the North Carolina ski areas with the exception of Sapphire Valley are making snow again! It’s been well over a week since temperatures were anywhere close to being cold enough to make snow! This is a great thing, folks! The last few days we saw bases start to drop of by a few inches – and like I’ve said a few times it was no cause for concern – and now ski areas have the chance to not only rebuild the bit they lost to rain, warmer temps, and skier traffic, they can also lay down a few inches of brand new fresh beautiful high quality snow for skiers and snowboarders to get out there and really enjoy!

I spent a little time earlier this week talking about the different types of snow and surface conditions you’ll find at various times at ski areas from loose granular to frozen granular to powder and so on. A favorite for lots of skiers and snowboarders (if there’s not 6 inches of fresh powder to shred) is either packed powder or groomed. Groomed snow – often called groomers – is created by grooming machines. If you’ve been out on the slopes between sessions or after the slopes close for the night, you’ve seen these big crazy looking machines. Well, they are absolutely crucial to keeping slopes and trails in prime time conditions! There are several companies out there who manufacture grooming 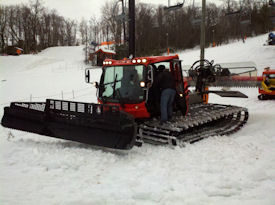 equipment, and between you and me, I don’t know the difference between Groomer A and Groomer B, but ski areas certainly have preferences.

Appalachian Ski Mountain uses PistenBully equipment. For use in Appalachian’s 3 terrain parks they use a PistenBully 400 Park. If you’ve ever been to App Ski Mountain you know that they take great care with making their freestyle parks top notch for skiers and riders, and this equipment is perfect for that. If you’ve ever got any question about the capability of the 6-cylinder Cummins Diesel powered machine, just head up to App and check out one of their parks. Beech Mountain also uses Pisten Bully 400’s for grooming their 15 slopes and trails. PistenBully is a popular company who has been manufacturing snow grooming and snow maintenance equipment since 1969 and the PistenBully 400 fleet launched in 2009.

A couple of cool things are going on over the next few days at area ski resorts!!

This weekend on Saturday marks the first event in App Terrain Park’s Shred for the Cup Contest Series – and their kicking it off big time with the BIG AIR event. Their PistenBully fleet will be put to good use in getting set up for this event. Here’s what the Mountain has to say about the upcoming competition:

"With all the jumps we have been able to construct this season, the competitions should definitely get heated. As always, App Terrain Park will construct a variety of jumps / takeoffs for all ability levels to compete amongst one another. TONS of prizes will be up for grabs from all of our event sponsors. Spy Optics will be on-hand to support the event, and hook all competitors and spectators up with “Beanies & Weenies” – Some product giveaways, and some delicious hot dogs, straight off the grill."

Here’s how the event works:

"Shred for the Cup is the premier event series in the region, and is better than ever going into its 5th season. As always, Shred for the Cup is open to Skiers and Snowboarders of all age and ability. Tons of prizes are up for grabs, as well as points for the entire series winners.

This is a fun event for everyone, even if you aren’t competing. App Ski Mountain has a huge observation deck off the lodge where you can watch the BIG AIR competition under the lights. There’s tons of young talent in the southeast and mid-Atlantic and this is a great opportunity to check out some of North Carolina’s best young freestyle skiers and riders!!

Today and tomorrow (February 3rd and 4th) at Cataloochee it’s Law Enforcement Appreciation Days – Law Enforcement Personnel and family members receive greatly reduced rates for lift ticket, rentals, and lessons! AND $3.00 from the purchase of each law enforcement ticket sold goes to the Maggie Valley Police Association. So, you can ski for cheap and it benefits local law enforcement!

ALSO at Cataloochee – As you all know January was National Learn to Ski and Snowboard Month. Well, the learning doesn’t stop on February first. Cataloochee offers a free 1.5 hour lesson with purchase of a lift ticket and rentals ALL SEASON LONG!! There’s never been a better time to get out there and learn a new and fun sport!!

Beech Mountain’s tubing lanes are back open today! Also, Beech is still running it’s 30/20 deal. Tickets are only $30 for the day or twilight sessions and $20 for the half-day/night sessions today!

AND at Wolf Ridge Resort it’s COLLEGE NIGHT. Be sure to bring your Student ID and get a lift ticket for only $15.

For more details on what’s happening at the other ski areas in the southeast and mid-Atlantic check out www.SkiSoutheast.com. And while you’re at it explore our sister sites www.HighCountryWeather.com and www.HighCountryWebcams.com!!!

Feel free to email me directly at [email protected]. I don’t bite and I won’t share your information with anyone!!