QUICK NOTE: If you’re looking at our Snow Reports this morning, we have one glitch that we are working to fix. The MADE SNOW and NATURAL SNOW fields are showing that resorts made and received snow when they did not. We will have that fixed by AM Monday. For today we have added whether a resort made snow or not to the comments field.

I was traveling back to the High Country from watching my USC Gamecocks whip up on Clemson earlier on Saturday and as I came through Banner Elk at about 10pm it was 36°. Driving further on Hwy 105, down the steep grade the temps rose quickly to 44°. Then as the road leveled off at the bottom, near Seven Devils and into the entrance of my neighborhood it dropped back to 36°. I knew then that snowmaking crews around the High Country were not going to making any snow.

After researching the rest of the Southeast and Mid Atlantic ski resort communities it appears that the same whether pattern was in effect across all of the region as temperatures this morning are all in the low 40s.

Here’s some notables for today:

Canaan Valley – 41° – They are not planning to open until December 11th, and they have not made snow as yet, but they have now received 11" of natural snow on the season after 6" of snow fell from this last storm!

Snowshoe Mountain – 41° – They received 6" from the weekend snowstorm and they made some snow on Saturday AM as well. They are tentatively shooting for December 4th as their opening date and building base whenever possible.

Cataloochee Ski Area – 46° – Did not make snow – They opened to the 3/4 part of the mountain to the top of the quad on four slopes in only two nights of snowmaking – a Cataloochee first!

On Sunday, they will be skiing on four slopes, Intermediate Rock Island Run and Intermediate Lower Omigosh serviced by the Rock Island Run Quad Chairlift, Beginners Easy Way and Beginners Rabbit Hill serviced by the Easy Way Triple Chairlift on a base of 6-14”. Also, there will be some terrain features available for you to ride located on our Easy Way slope.

On Sunday, they will offer one session of skiing, day skiing from 8:30am-4:30pm, with a morning or afternoon half day rate also available. They will then CLOSE from Monday through Thursday and then reopen weather permitting on Friday.

Sugar Mountain – 41° – Did not make snow – They are open with two slopes and one lift. Sugar is charging an Adult Full day lift/slope ticket prices of $32 and adult 1/2 day lift/slope tickets are $24. Sugar has a new lift ticket scan system in place and according to several reports they are scanning your ticket on every trip up. That really slowed things down on Saturday according to emailed reports. The other side of that is that if you lose your ticket now, Sugar will replace it which they have not done in prior years – so there’s a good side to the new system. 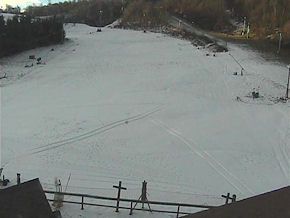 <Ski Beech this AM

Ski Beech – 45° – Did not make snow – They have made snow and we know a ski area that would be open with that much snow but hats off to Beech for holding out for more base. They have now announced December 5th as their intended opening date.

We received SEVERAL VIDEO SNOW DANCES over the weekend and we’ll be posting those and a winner on Monday or Tuesday. If you have not sent yours, you could win a FREE SKI GETAWAY! Check out the announcements on the front page and enter today!

For the updated Skier’s Forecast for the entire region.

Be sure to check out SkiSoutheast.com for reports from all of the ski areas from West Virginia Ski Resorts, Wisp Ski Resort, the Virginia Ski Areas and Ober Gatlinburg as well. Visit www.SkiSoutheast.com  for all of the news that IS NEWS from the Southeast and Mid Atlantic. Send your photos, videos and trip reports and comments to [email protected]