SNOW ON THE WAY FOR ALL SOUTHEAST AND MID-ATLANTIC SKI AREAS!!

SNOW is back in the forecast for ski areas from Maryland to Tennessee!! Even the Virginia ski areas may see a little of the magical white powder! Bases depths are holding steady at the same level they have been over the last couple of days despite rain in some places and temperatures in the upper 30’s at some areas. We may see depths drop by an inch or two, and this is normal, so no worries!

Canaan and Timberline have gotten snow on the last 14 days!! That’s incredible and I just wanted to point it out…the season snow total at each of these West Virginia areas is 123.6 inches!! 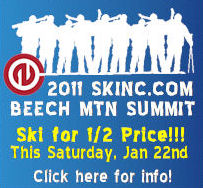 We’re getting geared up and excited about the SkiNC Summit this weekend at Beech Mountain. I hate to keep talking about it but we’re excited and can’t wait to get out there and enjoy some wonderful January skiing with our friends and family!! We have 130 confirmed attendees who will join us to take advantage of ½ price lift tickets and a really GREAT time!! For more details on this year’s SUMMIT click here.

Let’s have a look around…

Wisp Resort – 18°- Open today on 100% of the mountain! 8 lifts are operating and snowmaking is in progress. Wisp is open for day and night skiing and riding. Weather – Tonight: Snow. Low around 15. Calm wind becoming west between 10 and 13 mph. Chance of precipitation is 100%. New snow accumulation of 3 to 5 inches possible.

Friday: Snow showers, mainly before 4pm. Temperature falling to around 9 by 5pm. Wind chill values as low as -8. Breezy, with a west wind between 16 and 20 mph. Chance of precipitation is 80%. New snow accumulation of 1 to 3 inches possible.

Bryce Resort – 36°- 100% open today for day and night skiing and snowboarding. Tubing will be open at 6pm. Bryce offers some great first-timer packages…for those 8 years and older the package includes rental, an 1 ¼ hour lesson, and slope ticket for less than $70 during the week and less than $80 on the weekend!

Massanutten – 30°- Open on 100% of the mountain from 9am – 9pm! Both Terrain Parks are open and the Tubing Park is open with 8 lanes! Tomorrow is College Day…with valid ID an 8-hour session slope ticket for $30!

The Homestead – 23°- Open on 8 slopes and trails with 2 lifts! Tubing is also open. The Homestead has a Stay and Ski Free Package…for $199 you can get awesome accommodations and lift tickets for two!!

Wintergreen – 25°- Open today 100% of the mountain! Check out the Winter Escape Package – Just $79/person gets you: accommodations, 8-hour lift ticket, unlimited use of Aquatics and Fitness Center, Wintergreen Shuttle, and more!

Virginis Ski Area Weather (based on Massanutten) – Tonight: A chance of rain and snow before midnight, then snow likely. Cloudy, with a low around 26. South wind 7 to 9 mph becoming west. Chance of precipitation is 70%. New snow accumulation of less than one inch possible.

Friday: A chance of snow before 9am. Mostly sunny, with a high near 29. Breezy, with a northwest wind between 13 and 20 mph. Chance of precipitation is 30%. New snow accumulation of less than a half inch possible.

Canaan Valley – 18°- MORE snow at Canaan! Only 6 days since the start of the year have NO SNOW according to David Lesher’s Davis, WV weather report. It’s unreal! Canaan is 100% open today on all 39 slopes and trails!!

Snowshoe Mountain – 19°- Open today with ½ inch of new snow. Overnight snowmaking means awesome conditions today!! Here’s what Snowshoe-diva Laura Parquette has to say today, “Today is one of those days that’s all about "hurry up and wait". We have snow in the forecast but we don’t expect to see flakes start to fall until after 9pm today. Accumulation predictions seem to vary by reporting service, but we could see as much as 10" of new snow before the end of the day tomorrow. The snow is in great shape today and we’ll have a beautiful sliding surface out there, but it’s hard not to look ahead to a possible powder day tomorrow (and Saturday)! We’ve continued to leave Choker ungroomed and there are some fabulous bumps forming in that area. It’s also a great spot to view some advanced skiing and riding from the Powdermonkey lift. We have been making snow overnight and Gandy, Ballhooter and Cupp Run all have a fresh couple of inches added to their base this morning; those should be sweet spots to hit first thing this morning. Over at the Silver Creek area, Bear Claw and Flying Eagle are providing excellent expert terrain and unbeatable conditions. Don’t forget that your Snowshoe lift ticket also grants you access to our complete Silver Creek trail system from 9am until 9pm. Our fast, free shuttle system will give you a lift from the Village, South or North Mountain areas and you can enjoy even more room to play! If you’re reading this in anticipation of a weekend visit, definitely check out Silver Creek for wider slopes and fewer folks! Speaking of Silver Creek, Robertson’s Run small park is closed today for a park rebuild. Mountaineer was rebuilt yesterday and should be looking sweet this morning for all the jibbers out there. The Spruce Glades Large Park, Timberjack Medium Park and Powdermonkey Small Park are also all open as well. Spruce Glades will be rebuilt in the near future in anticipation of the upcoming Red Bull Super Hit event on Feb 5th. This skiers-only event will send 1 qualifier to the Simon Dumont sponsored Dumont Cup later this year! That’s huge for any skier and we look forward to seeing some of the region’s best throw down on Feb 5th. That weekend will also be animated with our Homegrown Music Festival. We’ve invited some of the region’s best musicians to join us on the mountain for a weekend of live music that’s grown right here in the south! You’ll enjoy bluegrass, country and some great Southern rock at various locations all weekend.”

Timberline – 18°- Open today on 38 of 39 trails and slopes. Timberline is hosting a Telemark Workshop this Saturday (1/22)! This is a great way to get out there and enjoy the snow and learn something new!!

Winterplace Resort – 28°- 100% open today for skiing and riding during both day and night sessions! Conditions are awesome!!

West Virginia Ski Areas Forecast (based on Snowshoe) – Tonight: Snow, mainly after 9pm. Low around 8. Wind chill values as low as -10. Breezy, with a south wind 9 to 12 mph becoming west between 18 and 21 mph. Winds could gust as high as 31 mph. Chance of precipitation is 100%. New snow accumulation of 2 to 4 inches possible.

Friday: Snow showers and areas of blowing snow. High near 11. Wind chill values as low as -13. Windy, with a northwest wind between 23 and 29 mph, with gusts as high as 46 mph. Chance of precipitation is 100%. New snow accumulation of 2 to 4 inches possible.

Appalachian – 26°- Open today after a night of snowmaking on 100% of the mountain! Season passes are on sale right now! This is a great opportunity to get in some inexpensive skiing for the rest of the season!

Beech Mountain – 30°- 100% open with a ½ inch of new snow. Beech will make snow this week as temperatures to provide ideal skiing conditions this weekend (for our SkiNC Summit…had to put that in there)

Cataloochee – 28°- Open today on 100% of the mountain for day, twilight and night skiing and riding. Today and tomorrow (1/20-1/22) are Military Appreciation Days! All active and retired Military personnel and families will receive special rates on lift tickets, lessons, rentals and tubing!!

Sugar Mountain – 30°- 100% open with a TRACE of new snow! Sugar says there will be no snowmaking during day OR night sessions! Snow Tubing and Ice Skating are both also open today!

Wolf Ridge Resort – 27°- Open to day on 16 of 23 slopes with more terrain slated to open for the weekend! The slopes are groomed and in great condition! It’s College Night at Wolf Ridge – $15 lift ticket (night only)!!

North Carolina Ski Areas Forecast (based on Beech/Sugar) – Tonight: Snow, mainly after 10pm. Patchy fog after 8pm. Low around 19. Breezy, with a west wind 5 to 8 mph increasing to between 18 and 21 mph. Chance of precipitation is 90%. New snow accumulation of less than one inch possible.

Friday: Snow showers likely, mainly before noon. Cloudy, then gradually becoming mostly sunny, with a high near 24. Breezy, with a northwest wind between 14 and 22 mph, with gusts as high as 37 mph. Chance of precipitation is 60%. New snow accumulation of less than a half inch possible.
Tennessee

Ober Gatlinburg – 34°- Open today on 100% of the mountain! Tubing is also open today for several different sessions starting at 11am!! Weather – Tonight: Snow showers, mainly after 10pm. Low around 23. West wind between 5 and 10 mph. Chance of precipitation is 100%. New snow accumulation of 1 to 2 inches possible.

Friday: A chance of snow showers before 1pm, then a chance for flurries. Mostly cloudy, with a high near 32. West wind between 5 and 10 mph. Chance of precipitation is 30%

Take some time to check out our sister websites…