Meteorologist Brad Panovich is back at his weather post with SkiSoutheast for the season now and his first forecast informs us that "Winter has finally arrived". We’ve posted his weather video update and we urge you guys to watch it. The gist of it is that Winter-like weather looks to be sticking with us here in the eastern part of the United States for the next few weeks. 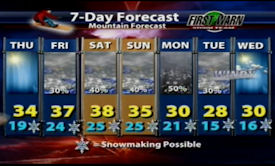 <Average mountain forecast for the next few days!

He’s forecasting two or three clipper systems that should push into the Southeast and Mid Atlantic over the next few days. Right now he says a big trough of cold air is digging into the area that will continue to provide us with plenty of cold, cold air. Looking into this weekend he’s expecting a bit more snow to pop into the ski mountains. He’s saying that the North Carolina Mountains could see 2-3" of snow this weekend, and the Virginia’s could see 7-10" of snow! He adds that we all could see a bit more snow Monday and Tuesday of next week.

On top of that we’ll see nearly around-the-clock snowmaking opportunities for all of the ski areas of the region and that will mean more trails opening at your favorite resort.

While I’m thinking about it, I really want to thank Brad for providing these insightful video forecasts for us again this season. For those of you who are new to SkiNC and SkiSoutheast, Brad’s "one of us" – a fellow, snow-loving, mountain loving guy. We hope to Brad out on the mountain with us some this season as he’s become a fixture around here over the last few years.

Be sure to check out Brad’s Skier’s Forecasts all season long at: https://www.skisoutheast.com/weather.htm

OH WHAT A NIGHT!

A quick glance around the region this morning will tell you two things. One, it is plenty cold out. We’re seeing temps in the teens all around the region. It is 19° at Snowshoe’s base. We’re seeing 14.2° up on Beech Mountain and 13° at Sugar. It is 27° at Wolf, 22° at Cataloochee, and 28° at Massanutten Resort in Virginia. So everyone is getting in on the cold temps and snowmaking ops.

We heard from Massanutten’s Kenny Hess, who serves and the resort’s Director of Business Operations. He wrote, "We did make snow from top to bottom Fri, Sat and Sun nights. Like everyone else, we’re waited to see what damage the rain did before the next cold shot."

He added that they’d be blasting the slopes on Wednesday night and that we should have a more definitive opening date later in the week for Mass. Thanks for that head’s up Kenny.

When we see the kind of temperatures that we’re witnessing this morning, the amazing snowmaker’s of the Southeast and Mid Atlantic can work magic on the slopes. Wednesday morning we showed some rain-worn slopes at App, Beech and other mountains and just 24 hours later things look ready for primetime.

As we announced earlier, Appalachian Ski Mountain will open for the season Friday (tomorrow). The first 100 people to show up will get a FREE LIFT TICKET! Last we heard App will be open for day and night sessions as well. We will try our best to get you some pics and video from day one at Appalachian Ski Mountain! After 5" of rain on Tuesday and Tuesday night, App picked up a Trace of natural snow, but they have blasted a blizzard of manmade snow in the last 24 hours. They’ll have great conditions for Friday.

Beech Mountain Ski Resort – 13° – They are blasting the slopes and are reporting another 1" of new snow. That’s 2" since Wednesday morning and one look at their Quad house webcam will attest to the fact that they look really nice up atop Ski Beech. Beech plans to open Saturday morning as well. Beech wrote, "We will open for the 2010-2011 season this Saturday, December 4, 2010. Tickets will be sold at $30 for a day ticket and $20 dollars for a half day ticket. Lift tickets will go on sale at 8:30am and the slopes will close at 4:30pm."

Cataloochee Ski Area is reporting 24° this AM and a Trace of new snow on Wednesday. They are blasting the slopes and will be reopening on Saturday morning.

Sugar Mountain – 13° – They saw another 1" of snow and 2" since Wednesday AM. Sugar is open with 5 trails today (that’s three more since Wednesday AM) AND Sugar debuts night skiing tonight. They have Upper and Lower Flying Mile, Load Off, Switchback and Northridge all open. That puts Sugar open to the top!

Wolf Ridge Resort – 25° – Making snow. I was speaking with Dick Wolf of Scenic Wolf Resort on Wednesday and he told me that the word up there is that Orville is planning a Saturday opening day. Their webcams are all down right now but they are working on things. Other good news from Wolf is that THE LODGE STEAK & RIB RESTAURANT will re-open when the slopes open!

Bryce Resort – 36° – Obviously they are not making snow right now, but Ryan Locher told me that they had made snow this past weekend and expect to make snow Thursday night and that temps looked good for them going forward to be able to make their December 10th opening date. Their live cams are down right now but he said they were working to get them running today.

Wintergreen Resort – 18° – You can almost see the smiles within this post this morning, "WE ARE MAKING SNOW! If you love winter, you should have a big smile on your face this morning. Temperatures overnight provided a wonderful opportunity to start laying down the white stuff. The mountain looks fabulous! We have a great forecast, predicting round the clock snowmaking through the weekend. You can bet we will make every minute count because we want to slide as bad as you do! Opening Day is only 2 weeks away; we plan to ski, ride and tube on December 10th. Cross your fingers and toes for cold weather."

Canaan Valley – 17° – 1.8" of new snow and that’s 7.5" on the season. Canaan Valley plans to open NEXT weekend, December 10-12th. They are making snow like crazy and preparing for a QUALITY start to the season.

Timberline Resort – 17° – Ditto the snowfall for the sister, Davis, West Virginia ski area. Timberline is just six days aways from opening day and making snow like crazy. Timberline was granted permanent access to water from the Blackwater River and that definately will increase their snowmaking capabilities for this season.

Snowshoe Mountain – 19° – 2" of new snow and 8" on the season so far. They are making snow and plan to open December 10th. Laura Parquette wrote, "Now THIS is what we’re talking about! It’s finally starting to look and feel like winter, with 2” of fresh snow on the ground and the snowguns working their magic across the resort. We have snow in the forecast right on through the start of next week, but more importantly, temperatures will remain VERY cold in the week leading up to Opening Day on Dec 10th. That means we should be able to push out tons of the white stuff, with 100 guns working at the Snowshoe area. We should open with amazing Opening Day conditions, and perhaps have a welcome reminder of last season, when our delayed Opening Day began with 8” of fresh snow!"

Note: Snowshoe, Canaan & Timberline are all looking at perhaps 8" of snow between now and next Tuesday. That should make for an awesome opening!

Winterplace Resort – 25° – The saw another TRACE of snow according to CocoRaHs reports this morning. The 2" of rain that was reported Wednesday morning didn’t mess with the snowmaking ops too much and Winterplace is now making snow and preparing for a December 11th openin day.

Wisp Resort – CoCoRaHs reported 1.41" of rain Wednesday morning and so far Wisp has only officially seen a few dustings of snow so far. They are not reporting any snowfall this morning and CocoRaHs hasn’t posted yet, but we’ll update you as soon as we hear from them. They are making snow like crazy as we can see on the dozen or so LIVE cams they have up there.

Ober Gatlinburg is at 27° and making snow this morning. The LIVE cam up there is showing some early coverage going down. There’s no official word yet on opening, but with the temps cooperating now we’d expect Ober to open next weekend.

Sapphire Valley – 26° – No report. We called over there to see if anything was happening in the way of snowmaking and they’re still thanking people for last season and the snowline says "We’ll open weather permitting." Hmmmm.

We always get some funny emails from you guys (particularly the rabid messageboard peeps) and I’ve seen this one but it’s always good for a laugh. It relates to how we, here at SkiSoutheast.com tend to do our weather forecasting! (Obviously we’re certain Brad Panovich and our other weather gurus around here are more sophisticated – hopefully 😉

SafeTmanEd from over on the messageboard emailed us this.

It’s late fall and the Indians on a remote reservation in South Dakota asked their new chief if the coming winter was going to be cold or mild.

Since he was a chief in a modern society, he had never been taught the old secrets. When he looked at the sky, he couldn’t tell what the winter was going to be like.

Nevertheless, to be on the safe side, he told his tribe that the winter was indeed going to be cold and that the members of the village should collect firewood to be prepared.

But, being a practical leader, after several days, he got an idea. He went to the phone booth, called the National Weather Service and asked, ‘Is the coming winter going to be cold?’

‘It looks like this winter is going to be quite cold,’ the meteorologist at the weather service responded.

So the chief went back to his people and told them to collect even more firewood in order to be prepared.

A week later, he called the National Weather Service again. ‘Does it still look like it is going to be a very cold winter?’

The chief again went back to his people and ordered them to collect every scrap of firewood they could find.

Two weeks later, the chief called the National Weather Service again. ‘Are you absolutely sure that the winter is going to be very cold?’

‘Absolutely,’ the man replied. ‘It’s looking more and more like it is going to be one of the coldest winters we’ve ever seen.’

‘How can you be so sure?’ the chief asked.

The weatherman replied, ‘Because the Indians are collecting a &%$#load of firewood’