With only TWO ski areas operating during the week – it took me all of about five minutes to put the snow report into place. I was thinking about that yesterday afternoon when I got a call from Cataloochee’s energetic Communications and Marketing Director, Tammy Brown. She wanted us to be the first to know and relate the fact that Cataloochee has decided to ski on deeper into the month of April. Part of me thought that it was a cruel, early, April Fools prank, but I considered the fact that Appalachian Ski Mountain already had me continuing to work and post content through April 11th. So I figured "what the heck" posting TWO ski areas as open and talking about them isn’t much different that writing about one, right?

…and then she kind of hinted that they actually might ski and ride "another weekend or two" after that. With some milder temps headed our way for this weekend and beyond, I’m r-e-a-l-l-y thinking that Appalachian and Cat will close up on April 11th…but one never knows. I had hinted that one day we might see a season that starts only a couple of weeks after a previous one ceases…but I THOUGHT that I was kidding! If Cataloochee does go another weekend or two into April…

…okay THAT’S a whopper of an exaggeration but if the weather was to cooperate we could see a season that begins in mid October and doesn’t end until mid-to-late April.

Tammy was telling me that she was confirming their 33-108" base depth reporting with their ski patrol and they told her that were several areas of very deep snow still on the slopes. Appalachian, Cataloochee and Snowshoe are all reporting the minimum side of their base depths as more than two feet and I can tell you that all three certainly have a number of areas on their mountains with snow deeper than five feet…and we’re a couple of days away from APRIL!

I was looking at the prospects for the next couple of weekends and it looks like we’ll see a LOT of white on the slopes this coming weekend and we’re not talking about snow. White – as in white arms and white legs as I will guarantee some shorts and short-sleeved shirts on the hill as temps are forecasted to reach 73° on Thursday in Banner Elk and warmer around Blowing Rock and Maggie Valley (home to Cataloochee). This weekend looks a little cooler with lots of sunshine and temps around 70°. Snowshoe could see temps a degree or two cooler into the mid and upper 60s.

If you’re headed to Appalachian and Snowshoe Thursday through the weekend (or Cataloochee and Wisp this weekend) be SURE to take your sunscreen! You will get burned a lot quicker out on the snow than you would at the beach this weekend. Look for some lobster-faced peeps on the hill late on Saturday and Sunday.

So…Congrats to Tammy Brown, Chris Bates and all Cataloochee fans as they extend their season for another weekend or two.

If you’re heading to Appalachian this weekend, expect very nice conditions and lots and lots of snow. I heard from my unnamed source who said that their ski area was the only one to have a GREAT season a couple of weeks ago (they are now closed). He shared that Appalachian "couldn’t possibly make it to April 11th".

It’s one thing to be loyal to your own ski area, but it’s another to be stupid. Appalachian could remain open til MAY if they wanted. It’s all about skier visits and according to our sources at Appalachian, Cataloochee, Snowshoe and Wisp, there was good numbers this past weekend. If that keeps up we may see a resort or two go longer than April 11th. I kind of hope not…cause I’m ready to move on to my real job…but until then, I’ll be right here. 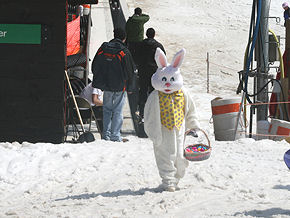 Bring your camera and come join the Easter Bunny for pictures on the slopes, two children’s Easter Egg Hunts with lots of hidden prizes including a 2010-11 Junior Season Membership. More than 1000 Easter Eggs, with candy and hidden prizes, will be spread around Appalachian’s Intermediate slope Strudel beginning at 9:30 am, for skiers and riders ages 6-12. After the on-slope Easter Egg Hunt at 11:30 am, children ages 5 and under can find Easter Eggs on the grassy knoll beside the Appalachian Ice Arena. A raw egg toss contest will begin at 2:00 pm, for participants 12 and older (prizes for longest toss and biggest splash). Appalachian’s Restaurant will also offer a special a la carte Easter Brunch on Saturday with several delicious options.

Snowshoe Mountain – This weekend will be one big party on the mountain with their Last Hurrah festivities and there is plenty of snow left across our 25+ open slopes.

Previous Post
Cataloochee to REOPEN this weekend and Beyond…
Next Post
Could the National Health Care Bill SHORTEN OUR SKI SEASONS!?!? Yes, it could! See how…