Which Ski Area Has the Slowest / Fastest Lifts? 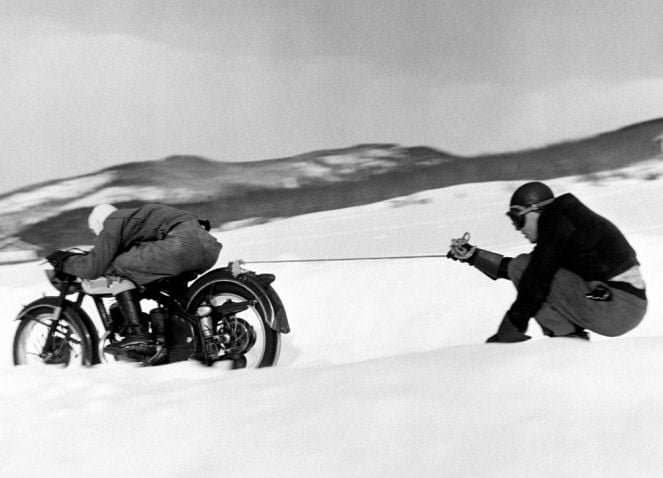 Before I get into my “mountain blog” today, let me mention that for those of you who came here looking for comments on slope conditions or a snow report, I’ve left that reporting to the SNOW REPORT PAGE. Click over to see all of the details.

Suffice to say that all of the resorts are showing temps that are about 15° milder than on Saturday morning. It’s still nice and chilly out this morning and that will have the slopes nice and firm to start the day. 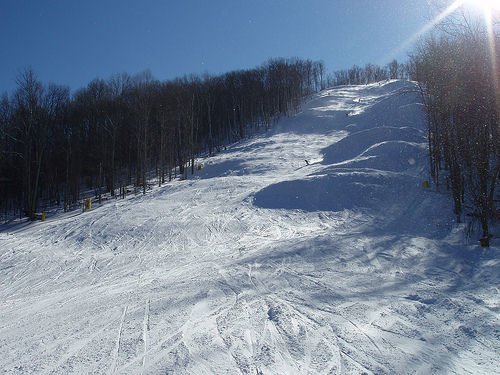 The only other notable is that some ski areas added another open trail or two and the most notable of THOSE would be Snowshoe’s opening of Shay’s Revenge which is opening today!!

Yesterday I spent hours not only posting the snow report, but elaborating on the percentage of natural snowfall that each ski area had seen thus far into the 2014-2015 season. That got a couple of emails from you guys.

Interestingly all I had to do to get more readers of my morning blog was to mention in the title that I was “bitching”. Since I was in a “math mode” on Saturday – yesterday’s blog had 27% more readers than from the day before! Evidently all I need to do is use a little, light profanity to up our readership.

Hmmmmm…. I’m not certain what that says about you guys 😉 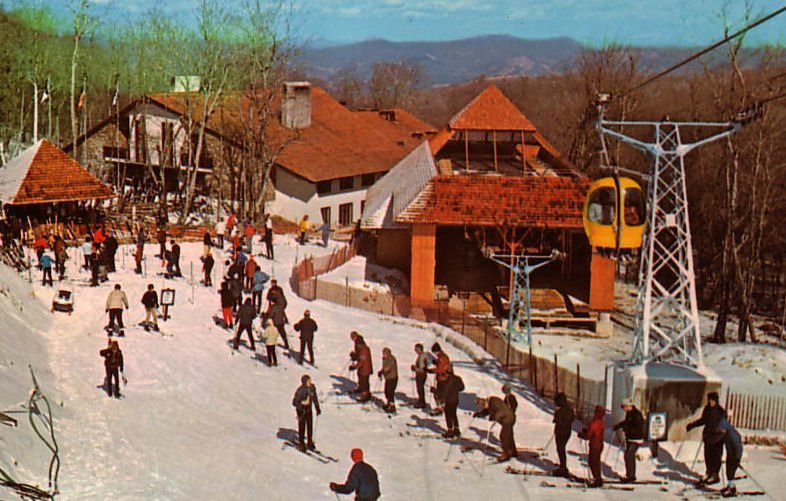 (Thanks to Ted Hendricks who sent me the lift photo above of Beech Mountain unique gondolas from 1967.)

Obviously this weekend is THE BUSIEST weekend of each season. Notice I mentioned WEEKEND. Obviously the Christmas to New Years week and weekend is the busiest period each season, but as far as long weekends are concerned the MLK weekend is always an important one in terms of helping to make or break a season for the ski areas themselves.

Thankfully the weather has cooperated and with great surface conditions, great slopes and trails open and awesome temps – there is no question that there is a ton of pent up desire to hit the slopes and thus every ski area saw some sweet skier visits on Saturday. Sunday and Monday will be more of the same and that is sweet news to the mountain ops and bean counters at every ski area in the region.

However, those huge crowds make for the largest lift lines of the season. That’s why you will rarely find any of us (regular/frequent skiers or snowboarders) anywhere NEAR a ski resort on this particular busy weekend. Heck it’s tough enough maneuvering the busy highways to grab a bite to eat or make a run to the hardware store on MLK Weekend.

However for those who DID make the trek to the ski areas of the region – we thought we’d put some great technology to work to see how the heavy crowds affecting your trip.

Earlier in the season I wrote a few comments about the new APP – Trace Snow. I have used in numerous times this season and I highly recommend it. The owners/developers promote the APP this way: 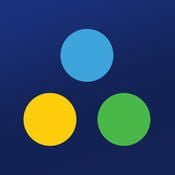 After a couple of days of using it at Vail it lost whole days – which was frustrating. The APP was/is free, so I wasn’t really bitching too much. However I DID mention that in one of my morning blogs and the next day I received this post from one of the co-founders.

I came across your blog today and noticed that you were having trouble with the app. The version you’re running on your phone had a bug where not all data made it up to the server, but this should be fixed (and some of your old data recoverable) if you use the latest version in the app store: www.TraceUp.com/snow

Would love some more detailed feedback so that we can make your experience awesome.

That was kind of cool to say the least. He’s correct – I downloaded the latest version and that fixed the glitch.  The bottom line is that this APP is really a “MUST HAVE” for any skier and snowboarder as you can see your average speed, top speed, calories burned, the amount of vertical you’ve skied on any day or for the season AND you can see the distance you’ve skied and the amount of time you’ve spent on the slopes AND ON THE LIFTS.

Before I get to the TIME SPENT ON LIFTS part of this story, the APP also displays a map of every slope you’ve ridden on any given day of the season.

AGAIN – I highly recommend that you guys download the APP and use it. You’re welcome to share your experience on the slopes and with the APP with us and maybe we’ll find some way of doing a contest or something for the top skier and snowboard at each ski area.  Share your time on the snow (for now) by emailing me at [email protected].

Okay NOW FOR SOME TRUTH…

This story ISN’T about which resort has the fastest lift in the region. Every ski area will slow or speed their lifts up or down on occasion. Probably the fast chairlift I’ve ridden in recent years has to be the main lift at the bottom of Silver Creek over at Snowshoe. A week or so ago they had that bad boy churning up the mountain. It would literally pop you in the back of the legs loading.

On a general basis – non holiday, non heavy lift lines – I’d say that pretty much all lifts are about the same really. We can all bemoan the long, 20-25 minute ride up Sugar’s main lift and that seems like something very popular for those who just want to crack on or gripe about anything to do with Sugar. However, I’ve ridden some slower lifts in my time.

The old lift at Hawksnest used to break down more than “Lil Wayne” and boy was it slow.  I know that Beech Mountain Resort’s quad lift is pretty fast. (I’m sure I’ll hear from a few of you about the fact that it’s ‘broken down’ a few times this season.) Beech actually has a billboard erected right at the entrance to Sugar Mountain that bills the lift as the fastest in the region.

It’s certainly faster than Sugar’s main lift to the top. App’s lifts don’t have far to go, but pound for pound Appalachian’s lift system is well-maintained and fast. Ditto that for most of the resorts in the region. 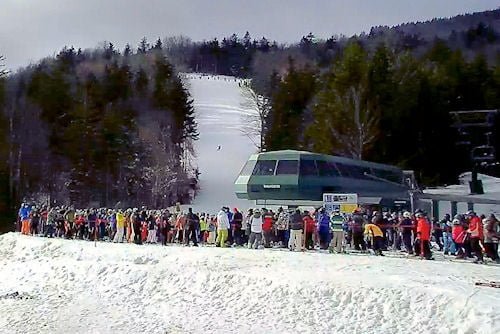 We all hate them. Skiers and Snowboarders who either ski or ride frequently – or those of us who live close to ski resorts avoid them like the plague. The resorts themselves don’t like talking about them and if they have live webcams, they try to insure that the cameras aren’t pointed at the lift lines on the busiest of days. Don’t blame them because the webcams are there for marketing purposes and it makes no sense showing massive lines.

I spent some time on Saturday and again this morning looking at the cameras AND reviewing MANY users who TRACED their days at various resorts. Unfortunately I couldn’t get data for every ski areas in the region as either Trace Snow doesn’t know that Wolf Ridge exists or nobody that skis or rides there knows about the Trace app. (I’ve emailed my new buddy David.) 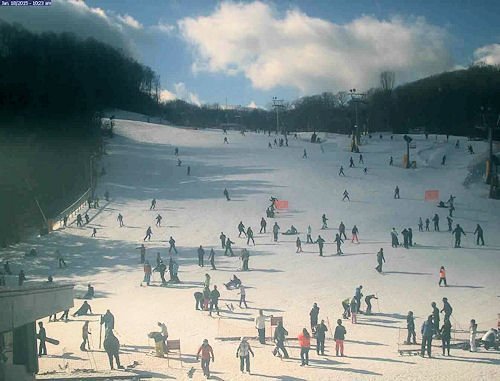 That said on Saturday (don’t shoot the messenger) the most time spent in lift lines was at Cataloochee Ski Area and Snowshoe Mountain where Trace App users spent nearly 85% of their time either in lift lines or riding lifts.

(View to the left was snapped at 10:25am this morning from the webcam)

Sugar Mountain users spent 74% of their time on their butts or feet – not skiing or snowboarding.

Before I start getting a ton of negative comments – let me give you some comparison data JUST so that you’ll realize JUST HOW MUCH TIME WE ALL SPEND ON LIFTS as compared to on the snow. Let me provide some perspective:

Last Saturday I was at Snowshoe and I only skied for the first 2 hours from 9am-11am when there were NO lift lines. Even on that early morning I spent just 47 minutes on the slopes as compared to 1:13 on the lifts. That’s still 71% of your time on lifts, compared to 29% of your time riding the snow.

So compare that to YESTERDAY’S crowds…it’s really not so bad, right? In fact, every resort that I monitored was averaging from 75-85% time on lifts.

I actually looked back at my recent Vail trip when you’re skiing for miles across the mountain and even there I spent 48% of my time riding lifts.

So hopefully those of you who are reading this realize that this post is not a crack on the resorts and not so much a message to stay away on busy weekends. Ask any of our ski and snowboarding diehards what it’s like to spend an hour climbing a mountain on foot only to take three minutes riding it down!

While you guys are thinking about it – go download the TRACE SNOW APP.

Perhaps on another blog I’ll share tons more…but on Saturday a couple of people stood out to me.

David C  made 15 runs at Sugar and skied 13.8 miles. He hit 42.3 mph which is really moving down the mountain. HOWEVER “Alexis E” topped that with a speed of 51.7 mph! Now THAT young lady was scorching the mountain. I’m not sure the ski patrol could catch her! By the way, Alexis made it down 11 times, skied 9.7 miles and of the 4:04 she spent on the mountain – 37 minutes of it was skiing. Before any of you think that I’m cracking on the time spent at Sugar NOT SKIING…that was about the norm across all of the ski areas on Saturday.

So which resort has the fastest lifts? Does anyone REALLY care? They ALL get the job done and most of us are spending A LOT more time at resorts NOT skiing and riding than we think.

Since I know I’ll get some emails asking about the Beech Mountain gondolas…here’s more images that Ted sent me. 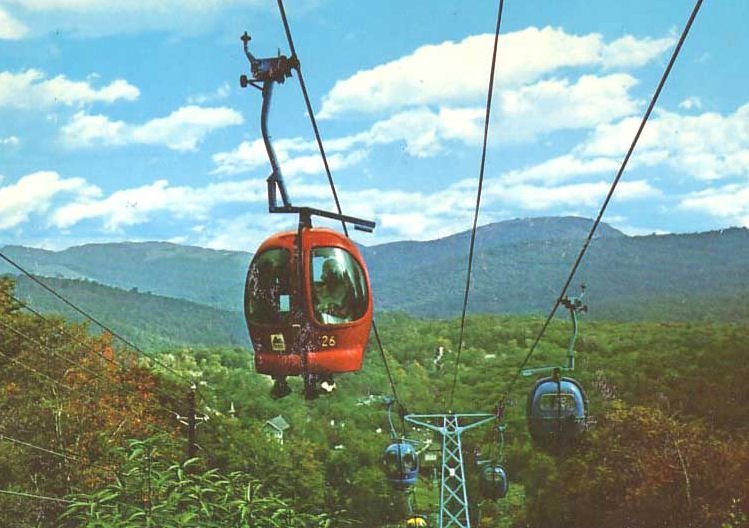