Appalachian Ski Mountain looks “Pretty Good” After a Day Off 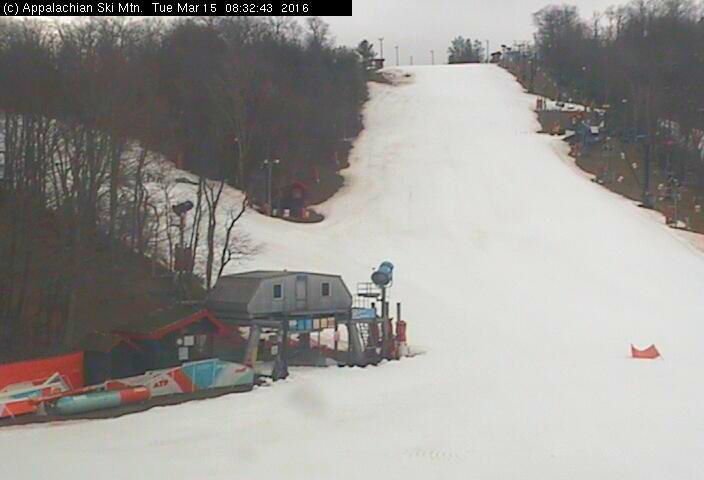 Only SIX of the region’s traditional ski resorts are open for business today. Liberty Snowflex in Lynchburg, Virginia is open 365 days a year and is looking like a great alternative for those with late season Joneses for making some turns.

I couldn’t help but cringe a little when the Vail alerts came in this morning. Another round of heavy snow hit Vail with 9″, Beaver Creek with 10″, Keystone with 14″ and Breck with 9″. I shuttered a little more when I received a Weather.com alert informing me about a “PATTERN CHANGE” bringing cooler air.

At this point I could almost hear the collective shouts of ski resort operators from across the entire region yelling, “GIVE US A BREAK!” It is just about ‘stick-a-fork-in-us, we’re done with this season’ time. Our ski area partners are certainly accustomed to a late season “Spring Conditions” phase of every season – but we’re certainly not accustomed to it happening in early-to-mid March…especially after such a challenging start to the season.

Over the last half-decade ski areas have kind of come to expect 4.5-5 months of season. With advances in snowmaking technologies – resorts can make snow at borderline temps. So ski areas have been able to stretch or milk most of those five months worth of days and call them “ski season”. There have been several seasons in the last decade when ski areas opened on Halloween and closed April 1st – creating a nearly five-month-long season. If you consider that as a possible ski season these days then THIS season was barely TEN of those TWENTY weeks. Even using the more “traditional” period from Thanksgiving to the end of March as a typical “season” – this season only lasted 10 of the available 17 weeks.

“Challenging is hardly the word…”

That said, we still have SIX ski areas ‘plowing ahead’ and plowing is probably a semi-appropriate word as snow grooming and maintenance crews are having to pull and push snow from wherever they have it stockpiled and then groom it to be as pristine as they can make it for early turns. These temps and skier and snowboarder traffic will quickly turn things to mashed-potatoes by noon. So our recommendation would be to get out early and often if you want some sweet, late-season conditions.

Of those that are open today, here are the notables.

Appalachian Ski Mountain is back open today after taking Monday off. According to Susan this morning, they spent a good portion of yesterday grooming the slopes. App’s Last night skiing will be March 19th and they hope to remain open for day skiing through April 2nd.

Beech Mountain Resort is open but they are now down to 6 slopes after closing 4 of the middle trails. They are open for day skiing and snowboarding. 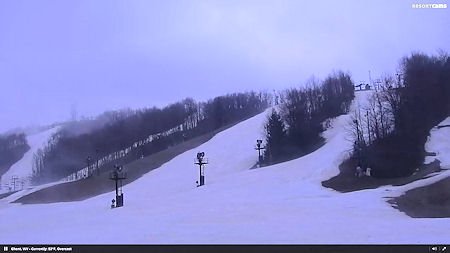 Winterplace Resort must have really taken a hit from the temps and weather over the last 24 hours as they are now down 13 trails from Monday. Today they are open with 10 slopes compared to 23 on Monday. The snow looks pretty good there via the webcams so there COULD be a scenario where they are keeping mid-week traffic off of the snow to protect and maintain it for the weekend visitors. We’ll see…

Cataloochee Ski Area is open for day sessions today with 13 trails. Their website was down when we checked it this morning. However we called up there and things seem to be going well for them to remain open for the next couple of weeks.

Snowshoe Mountain dropped a few trails but still have a region-leading 172 acres open covering 40 of 60 slopes and trails.

On Sunday and Monday we were talking a bit about perhaps 1-3″ of snow that looked to be heading towards some of the higher elevations. Snow is still in the forecast for the end of the weekend – Sunday into Monday – but now it looks like it’s on the lighter side of “under one inch” at Snowshoe, Beech and Sugar (the resorts that are open in those areas).

Lows at Snowshoe NOW look to be dipping into the low to mid 20s from this Friday through Monday. That is a little bit more prolonged “cold snap” than what we saw the other day. That is not a guarantee that Snowshoe will make snow.

Down in the North Carolina mountains the forecast is for slightly milder temps and potential snow-making temps for Sunday night. Although Beech isn’t reporting anything quite yet, the COULD close after this weekend.

That’s it for this morning.