Season Snowfall Totals and other Tidbits are discussed this morning! Hey it’s a slow news day!

We’re in for a "very cool" day today. Not cool temperature-wise, but cool that there will be some beautiful blue skies and temperatures in the 60s. Even diehard ski area employees are telling me, "We’re ready for Spring!" I was speaking with some staffers of Appalachian Ski Mountain and Sugar Mountain on Tuesday afternoon and they both expressed the same sentiment. John Hoffman from up at Fred’s General Mercantile on Beech Mountain commented this morning that he was over in Greensboro on some business on Tuesday. He shared, "Over there they had these crazy things like sticks sticking up out of the ground and some of them had yellow things on ’em, and others had purple things. …and their sky over there was an odd color – BLUE!"

Obviously it has been a wet, cloudy, snowy, icy, and cold three and half months and nobody in the ski industry is complaining because it has been a much needed and GREAT ski and snowboarding season in most every sense – but even the most hardcore snow lover seems to be giving in to the temptations of Spring. Most everyone is ready for some awesome, blue-sky days in the mountains…and trust me when I say that no area on the planet can grow as many colorful "sticks coming up out of the ground" like the mountains can. Wildflowers of every shade and variety burst forth at the slightest hint of milder temps. We’ve had some milder temperatures lately but only a day or two here and there where the skies were clear, blue and warm.

One reader wrote, "I don’t know about you guys but I’m glad to see that last, late season snow came when it did (Monday) so that it didn’t come after all the cherry trees and dogwoods bloomed. It (late season snow) seems to always ruin the flowering trees."

The only problem with her statement is that we’ve seen MANY late season snowfalls that hit in late March and even into April. As J. Greg Dobson recently wrote us, "Mike, …don’t forget that the NC snowfall record for a single storm was set in APRIL of 1987, 60 inches at Newfound Gap (5500’) in the Smokies!! And Mt. Pisgah down here south of Asheville had over 40” in May 1992!"

Dobson is the GIS Research Coordinator with the RENCI at UNC-Asheville Engagement Center and with the National Environmental Modeling and Analysis Center.

Although we’re not seeing anything like that looming in the future – one never knows around here. That, after all, IS Spring in the mountains!

Another reader asked us to share the "final" snow totals on the season from all of our coverage area. Again – I doubt the totals that we’ll share this morning are, in fact, final totals…nevertheless we’ll post that information. Bear in mind that we still have another 20 days wherein at least one ski area (Appalachian Ski Mountain) will be open for skiing and snowboarding. Until they shut it down…the official 2009-2010 ski and snowboarding season isn’t over.

Here are the numbers through this morning:

Before I receive some emails from our Wisp fans, we know that they are reporting 263" of snowfall this season. Wisp was off a number of times this season and we actually helped Lori and crew out a couple of times correcting their snowtotals UPWARD but then during the last couple of storms they mistakenly added two BIG storm totals in twice and never caught the error. We emailed them about it and they’ll catch it at some point. 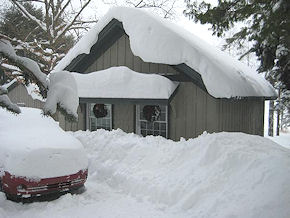 <Wisp HAS HAD a truckload of snow this season as this mid February photo shows! Photo compliments of Weather.com

There are several office CoCoRaHS reporting stations on and near Wisp and here are those numbers:

* We opted for the station/reporter located at the top of Wisp’s pinnacle. FYI, NOAA actually officially reports 166" of snowfall for McHenry, so what do they know, right?

For those of you who still are looking to make a few turns during what is left of this season (and we have a few peeps here at our office that wouldn’t mind hitting the slopes a couple more times) we’re looking at a nice day today. Thursday through Friday night is looking a bit wet but the weekend ahead looks pretty darn nice with highs in the 30s and 40s and mostly sunny skies.

Check the SNOW REPORT for resort options and trail counts. The quick summary is that App and Sugar are open in North Carolina. Snowshoe & Timberline are open in West Virginia and Wisp is open in Maryland. That’s it for today and Thursday. Several resorts will reopen for this weekend…and we’ve covered those in numerous posts over the last couple of days. Check the archives…

Previous Post
There was some nice morning corduroy at Wolf Ridge Ski Area last weekend. – Photo by SkiSoutheat/SkiNC MB Member Dreamofpow.
Next Post
THE LIGHTS ARE ON BUT NO ONE IS HOME! – by Joe Stevens