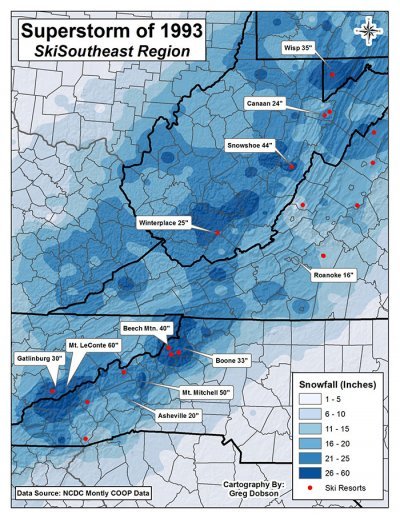 Today's article is mainly going to focus on the 20 year anniversary of the Superstorm of '93.  It's a rather significant event and it deserves the attention.  If you're looking for an update on conditions, head on over to the SKI REPORT page.  A little rain never hurt anyone and that was the case yesterday.  Everyone is still in good shape.  It's actually snowing this morning here in Boone and will continue to do so today.  Over the next 48 hours, the West Virginia and North Carolina resorts are expected to see some accumulations, with Snowshoe, Canaan, and  Timberline seeing somewhere in the 2-5" range.  It's not a lot, and nothing compared to 20 years ago, but it'll keep the stellar snow conditions going.  It's really just icing on the cake.

Twenty years ago today, we were at the height of the Superstorm of '93.  As I mentioned yesterday, I was only 6 years old so I don't really have any memories of it.  Luckily, a couple of you guys were kind enough to send in some thoughts/memories about the storm and allow us to share them.  We greatly appreciate it!

Jeffry Jackson, aka Captain America from the messageboard, first sent in his memories of the storm.  Here's what he said…

"I was living in Tucker, GA on the northeast side of Atlanta. We got 14 inches. It was quite windy and the snow was dry. I ended up with a 4.5 foot snow drift against my back door.

My friends and I headed up to Cataloochee on Monday morning, the first day they were able to open after the storm. The roads were fine until we got to Fie Top Road by Ghost Town. It had been plowed but only a little wider than one lane. There were 7-9 foot walls of snow on both sides all the way up. It felt like you were in a tunnel!

My Jeep Cherokee did fine. But anyone without chains or 4 wheel drive had to park at Ghost Town and ride up in one of the 2 Cataloochee Suburbans. Needless to say that took awhile!

We were very excited at the prospect of skiing the Meadow for the first time. Imagine our shock when we came around the corner and saw grass showing!!! Remember I said it was windy and the snow was dry? Well the wind had blown most of the snow off to the point of being not skiable. Ski patrol was not allowing anyone to try. Hard to believe that with over 2 feet of snow, there was grass showing.

But it was still an epic day at the Cat with very few people on the slopes.

At the end of the day, the line for the Suburban shuttles was quite long. People with room in their vehicles were making good money charging for rides to Ghost Town. I had a full Jeep so we just headed home."

I can't imagine the shock that people near Atlanta were going through at seeing that much snow.  People in the south, outside of the mountains, freak out at the sight of a flake, so I'm sure 4.5 foot snow drifts had them losing their minds!  Ha, I kid!

Greg Dobson from UNC Asheville also sent in a little write-up about the storm.  It's not so much a recollection but more of an overview about the storm and how it affected the ski areas in the Southeast.  It's really good and he even made a snow total graphic for the NWS that he's allowing us to use.  Read on!

March 1993. It is referred to as the Superstorm of 1993, the Blizzard of 1993, the Big One, and the Storm of the Century. Whatever you call it, the Superstorm of 1993 was the worst non-tropical weather event to ever affect the U.S. It impacted 26 states, resulted in billions of damages, and left hundreds dead. The storm actually began affecting the U.S. on March 12th and continued through March 15th, and was followed by a massive cold-air outbreak, all occurring during the middle of March! It had everything – storm surge, tornadoes, high winds, flooding, record-cold air, and massive heavy snows. At the height of the storm, with snow stretching from the Gulf Coast to Maine (20” from northern Alabama to southern Maine), every major airport on the east coast was closed, which at the time was unprecedented. Seven states recorded over 40 inches of snow. In Birmingham, Alabama, the all-time daily, monthly, storm-total, and annual snowfall records were broken from this single storm – 13”. Florida alone experienced practically every aspect of weather from the storm, with a 12 foot storm surge along parts of the Gulf Coast, a major tornado outbreak, extreme flooding, light snow, and damaging cold temperatures. 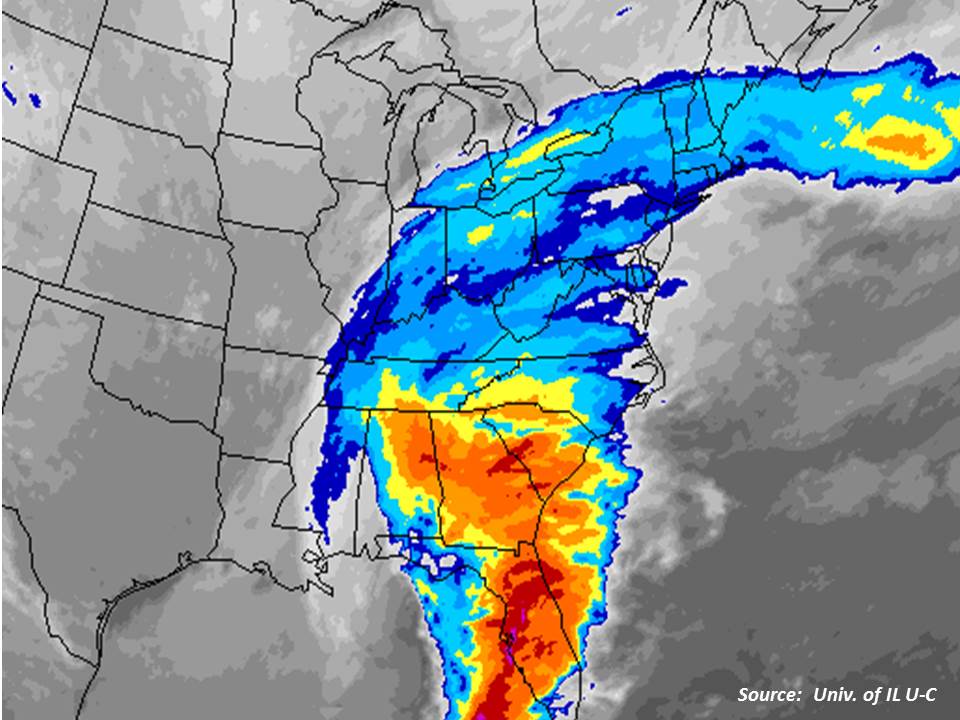 For the SkiSoutheast region and the southern Appalachians, the main affect from the Superstorm of 1993 was record-breaking heavy snows, accompanied by high winds and bone-chilling temperatures. Blizzard Warnings were issued for parts of the region, which is one of the few times in modern history that blizzard warnings have been issued in the southeast. Many all-time daily, monthly, and storm-total records were broken, including 20” in Asheville, 33” in Boone, 44” at Snowshoe, 50” on Mt. Mitchell, and 60” on Mt. LeConte, the highest snow total from the storm. People were stranded for days, even longer in some cases, as roads were completely impassable. There are reports of snow drifts well over 10 feet in places (14 feet on Mt. Mitchell). The National Guard assisted with air drops to deliver critical supplies and feed for farm animals. The K-Mart in Boone, NC served as an official landing site for helicopters. Some schools remained closed for three weeks. Stories abound of kids and the kids at heart being able to jump from their rooftops into the snow below. However, roof collapses were common to houses and businesses. It was definitely a life or death situation throughout the region. Never had that amount of heavy snow covered the entire southern Appalachian region.

The early 1990s were not a kind period to ski resorts across the southeast due to warm and dry winters, and prior to the Superstorm of 1993, many ski resorts had already closed for the season. In fact, most locations had not received any measurable snowfall for the season prior to the storm. However, the storm left 20” of snow or more from Sapphire to Wisp. But unfortunately, most of the record-breaking powder was not enjoyed, at least not at the ski resorts themselves, though cross-country skiing was a common form of transportation for days.

The Superstorm of 1993 serves as reminder for the SkiSoutheast region that even as the March, spring temperatures begin to roll in, and thoughts turn to golf, gardening, and water sports, winter is far from over! The SkiSoutheast region can and regularly does experience snow from October through April, and snow is not unheard of even in May. In fact, the North Carolina state snowfall record for snow from a single storm was set on April 5-7, 1987, at Newfound Gap in the Smokies, with 60”. There are unofficial reports of over 50” of snow on Mt. Pisgah, NC in early May, 1992. And just this past October, with Hurricane Sandy, many of our region’s mountain tops, including Snowshoe, had well over 24” of snow.

While there have been other notable snowstorms to affect the eastern U.S., especially in the northeast, none have ever had the variety of weather, the wide-spread affects, the far-reaching and southern record snows, or have impacted as many people simultaneously, as the Superstorm of 1993.

Here's the snow total map I alluded to… 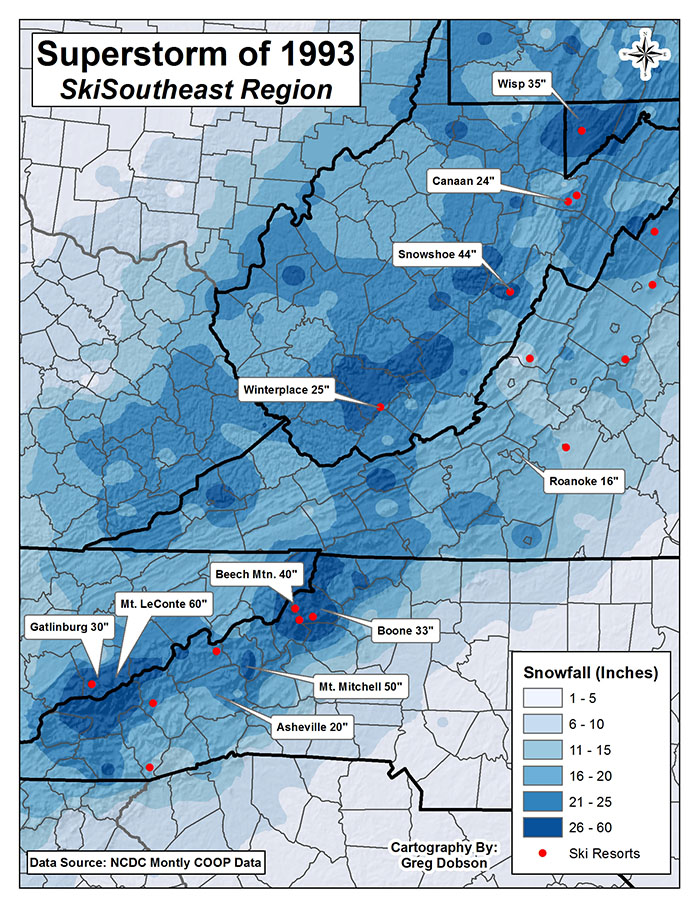 I can't imagine being able to ride that kind of pow here in the Southeast.  Unbelievable totals for a 2-3 day storm!  Greg also linked me to this YouTube video which shows just how much snow was up here in the High Country after the storm.  Crazy stuff!

If you want to read up a little more on the event, check out the two links below.  The documents go into a little more detail about the storm.  This really was/still is a fascinating event!

I'm going to see if I can get some more recollections of the event today from Joe Stevens and share them with you all tomorrow.  Mike was telling me he has some pretty cool stories from this storm as he was at Snowshoe.

If you have any stories, recollections, memories from the storm, we'd love to hear from you!  Anyone that sends us in a little write-up about the storm will get the hookup with some lift tickets!  So get those into us!