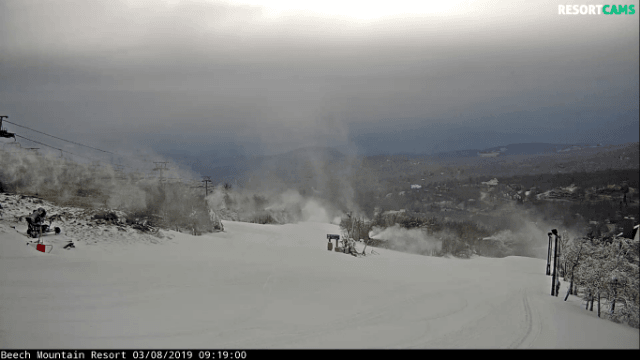 I figure if you are a reader of SkiSoutheast.com, I am guessing that you probably don’t want winter to end just yet. In years past, we have sometimes been a little ‘cheated’ by end of season conditions. Rest assured, that is not the case . . . for now.

I made it out to Cataloochee yesterday and it was one of my top 3 days this year, out there (the other 2 days being the big 20″ snowstorm in early Dec.). The snow was super good and firm, after having been super-cooled for 3 days/night prior. The temps were just above freezing and the sun was out . . . it just doesn’t get much better in the Southeast.

Overnight, Snowshoe saw 2″ of snow, Winterplace with 1″, and most others had some dusting or trace upon sunrise this morning. There was even some (slightly unexpected) snow showers at Appalachian Ski Mountain and at Cataloochee.

The bigger news is that it is currently snowing at most resorts. Today, the northern resorts (WV/VA/MD plus Beech) should see an inch (minimum) up to 4″ at the ‘Shoe.

Tonight, we should see ‘leftovers’ from this storm with up to an inch (more) possible . . . making for fresh tracks tomorrow morning.

Chalk up that rare March powder day today . . . Because tomorrow, the ‘unspeakable’ pays us a visit.

VA is going to ‘play in the snow a little longer’!

Snow. Cloudy, with a high near 36. South wind 2 to 8 mph. Chance of precipitation is 90%. New snow accumulation of 1 to 2 inches possible.

Snow likely before 7pm, then patchy fog. Mostly cloudy, with a low around 26. Southwest wind 2 to 6 mph. Chance of precipitation is 60%. New snow accumulation of less than half an inch possible.

Ober: Today we are open from 9am-10pm and will have 5 runs open:  Mogul Ridge, Upper Bear Run, Cub Way, Ski School and Castle!  The base is 15-35″ on our main slopes and the terrain park is located on the Skiers Right of Castle Run. Snow conditions are Machine Groomed.

END OF SEASON UPDATE:  We will continue to operate our ski/snowboard slopes after Sunday, March 10.  We will operate daily as long as we can, potentially through March 17th.  After Sunday March 10th, we will operate Mon-Friday, Noon-10pm, Saturday 9am-10pm, Sunday 9am-7pm.