Pick Your Own Adjective – it is SNOWING THAT HARD!

It is Sunday afternoon and I just HAD to update those of you who might be checking back in to see what was happening snow-wise or weather-wise today. All I can say is "WOW". I just returned from a tour of Avery County and it is going to be interesting to see the snow reporters tallies Monday AM. First of all, it has been BOMBING SNOW all day. We had moderate snowfall early this morning and just about the time that some forecasters had predicted we’d see things "die down" God changed things up. Those Northwest Flow snows that Brad Panovich was forecasting for the northern tier of ski areas, made their way into the mountains of North Carolina.

Since before noon you can use just about any adjective you want – bombing, puking, dumping – it has been doing it. The one-half to one inch of snow forecasted for today has been much more than that. Some areas have maybe seen little more than an inch more snow, while others have picked up 3-4" more snow just today and it is still snowing rather heavy at the time of this post. 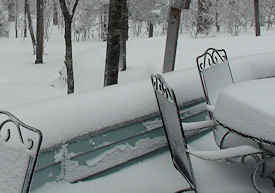 We rode up to Fred’s Backside Deli for some chili and it was bombing snow up there. Our unofficial measurement showed about 10" on the ground up there. We saw about 8-10" around Sugar and I had to pay a quick visit to throw some hay out for my horses and there was a consistent 8-12" of snow everywhere. 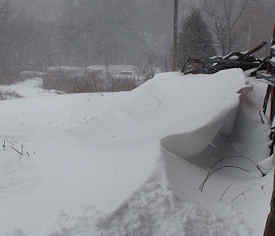 The snow was even deeper up at the top of the mountain but it was a white out and you couldn’t see to get a photo!

I’ve document countless times about that place at the bottom of Beech Mountain being "where snow goes to die" but there were drifts of snow more than three feet deep blocking the barn entrance. Up where the winds drive snow off the upper ridge into a 300 yard powder bowl on one side, there were drifts that I drove my Arctic Cat through that were 3.5 feet deep for more than ten yards before getting into the bowl where snow was easily a foot and half deep.

The main roads and Hwys 105, 184 and 194 alternated from being relatively clear to completely snow covered. Ditto Beech Mountain Parkway. We took a quick side trip up beside Charlie’s Beech Mountain Realty and Rentals to go slopeside and get some photos and video. No such luck as the it was complete white-out conditions. The road was barely driveable (I had to make more than a few stops and starts to get up it) and once there you could not even SEE the slopes which were less than ten yards away! That is how hard it was puking snow!

The same was true for Sugar Mountain. I figured I’d get some video over there and it just was not a video kind of afternoon as driving snows created whiteouts. I can imagine that the POWDER conditions were fabulous IF YOU COULD SEE!

I had to LAUGH when I JUST pulled up the National Weather Service forecast for this afternoon at Banner Elk. It reads:

Late Afternoon: Snow showers likely. Mostly sunny, with a high near 23. Blustery, with a northwest wind around 20 mph. Chance of precipitation is 60%. Total daytime snow accumulation of less than a half inch possible.

Tonight: Snow showers likely, mainly before 10pm. Patchy fog after 7pm. Otherwise, mostly cloudy, with a low around 16. Breezy, with a northwest wind around 22 mph. Chance of precipitation is 60%. New snow accumulation of less than a half inch possible. 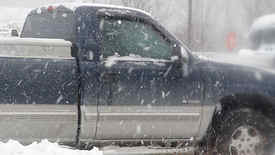 <Here’s your SUNSHINE at 5pm!

I can tell you that there IS NO SUN and the warmest I’ve seen today was 17° at Banner Elk.

I’ll post some pics to support this story in a few minutes. Check back! By the way SEND ME YOUR REPORTS, PHOTOS AND VIDEOS (make sure I have your name) and we’ll post them up!

To view the snow reports for ALL of the Southeast and Mid Atlantic ski resort communities, visit www.SkiSoutheast.com

We also urge you to visit: