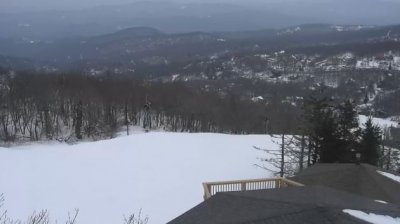 Well, not much has changed yet again from yesterday.  Last week was pretty crazy with the weather and what not, but things have calmed down quite a bit over the past several days.  Conditions have been pretty stellar this week as temperatures have remained favorable.  A few inches of natural snow made it's way into West Virginia, but other than that it's been all about the snowmaking over the past few days.  Base depths are basically what you would expect them to be at this time of year as are the open trail counts.  There are several ski areas that are 100% open which is great to see.  I feel like that's a good measuring stick on how good conditions are.  Base depths can be outlandish a lot of the times but if multiple resorts are reporting being completely open, that's how you know things are really good.  Check out the SKI REPORTS page to see what I'm talking about.

This really is the perfect time to get some turns in if you can, it might not get much better than this.  It's pretty crazy to think that a week ago it was flooding, and just 7 days later we're truly in the midst of peak season conditions.  It's so good in fact that I am actually going to get some riding in this weekend.  That may not sound like a big deal, but my friends always rag on me because I usually go home to Davidson every weekend.  I do most of my riding at nights after work during the week.  Unless it's fantastic conditions, like it is now, I'm not a fan of dealing with the crowds and what not.  However, Saturday is as good a day as ever to get some weekend riding in and I'll be headed up to Beech with my girlfriend.  She hasn't been on the snow in two years and I figure with it being 100% open we'll have a good time.  She's a big fan of the Oz Run so we'll probably hang out over there a good bit.  I'm pretty sure I'm also going to enter the Banked Slalom race.  I've never done anything like that before but it seems fun.  I'm hoping the course is going to be a little different from what they have set up in Powderbowl right now.  It's kind of slow towards the bottom.  It should be a good time though and I'm hoping to get some of my buddies to enter as well.

Speaking of Beech, I figured I'd share my story of almost wrecking my board out there the other night.  Basically, there was still some snow on the skier's far left on Upper White Lightning.  There are some small rock drops over there that can be pretty fun.  Just getting back from Utah, I was still in that kind of mode.  Unfortunately, right before I went over I scraped bare ground and lost my balance, gave everyone on the lift a show by cartwheeling, and slammed the tail of my board into the snow.  This is the result.

I was pretty bummed as it's a new board that I was riding.  I've maybe gotten 10 days in on it and I've never had anything like that happen to a board so I was pretty worried.  Luckily, Recess said they could fix it for pretty cheap.  That's definitely my go to place for anything that has to do with my board.  Needless to say, I'm very relieved.

I'm hate to be the debbie downer here, but the next 24-36 hours will be a little bit of a bummer after this past week of favorable conditions.  A little bit of liquid precip is in the forecast in addition to a wintry mix/sleet.  The good news is that it's far less rain than what was expected a few days ago.  The bulk of the rain is going to be to our south and east, so it could be worse.  I'm thinking glass half full here!  It also wouldn't surprise me to see Snowshoe, Canaan, Timberline, and Wisp reporting a couple inches of snow Saturday morning once northwest flow moves in behind the cold front.  The weekend will be fine though so no worries!

If you're a weather nerd or just like paying attention to that stuff, you should keep an eye on the Northeast this weekend.  The system that tracks to our south is going to turn into a beastly Nor'easter and some of the models are showing crazy high snowfall totals for the folks up there.  The Weather Channel has already named it Winter Storm Nemo.  I really don't like them naming storms like that, but the fact that they have is significant.

Once we get to Saturday the weekend is looking pretty good, especially Saturday.  You have no excuse to not get out on the slopes.  I know I already said it, but we really could be at the peak of the season.  I think we still have plenty of cold and snow left, but we are already well into February.  You don't want to take any chances and miss the current snow conditions!

Oh yeah, I forgot to mention the Echota cam is back online.  I was able to fix it yesterday and it's a pretty good resource for folks checking out road conditions on their way up to Beech or Sugar.

That's it for today.  Over and out.