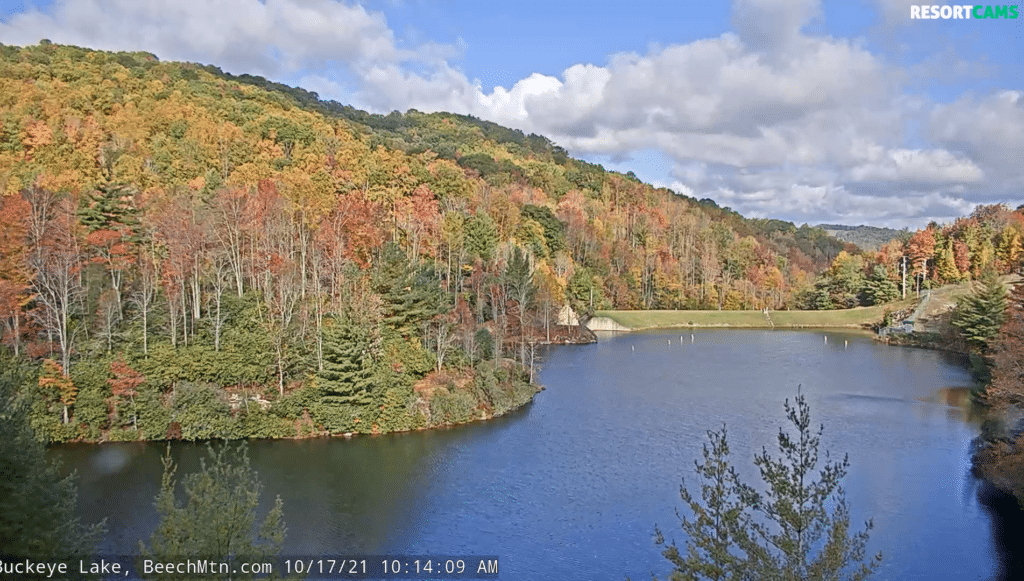 I’m going to start my post today by stealing the title of one of Kenny Loggins’ hits – “This is it.”

The last two weekends, October 9th and 16th are always my unofficial, official start to the ski & snowboarding season, even though we may not get any turns in on the snow for yet another few weeks. Most every year since 1995, I have made the Sugar Mountain Oktoberfest my “jumpstart” weekend. Like many of the Oktoberfests of the last few years, the first day of the event (Saturday the 9th), the was a rainy, yucky day. However, Sunday, October 10th was a gorgeous, Autumn day and my wife, oldest daughter, Jennifer and I headed over to Sugar Mountain early.

Nature had other plans for me that fine, Fall day as I had just gotten to the festival grounds and acquired a cold beer from the event staff. As I took my first drink, little did I know but a bee was on the lip of my glass and as I took that first guzzle, that darn bee bit me on the INSIDE of my lower lip. I am not allergic to bee stings, however that bad boy got me good and within thirty minutes my lower lip and entire left side of my face swollen up like you would not believe. We left Sugar and headed to the pharmacy for some Benadryl.

Twenty four hours of Benedryl and ice packs later I was all well. However, thirty minutes of the Sugar Mountain Oktoberfest was not my usual start to the Fall and Winter season.

…or so I thought. As we got up early Saturday morning (yesterday, October 16th), it was cloudy and gloomy looking, but not yet raining. So we figured we’d risk it and head over.

The drive up Hwy 105 to Hwy 184 was not as busy as usual which kind of hinted that a lot of people had come to an alternative decision and decided not to brave the drizzly weather. As I got to Banner Elk, the light rain hit. Not to be denied, we headed on in and got a ‘rock star’ parking spot at Stonewalls, which turned out to be nice – for the reason which will become apparent in a moment.

We went on in despite a pretty steady rain and there was a decent crowd of fellow, fall festival lovers. I had checked my weather APP, which meteorologist, Brad Panovich always warns against doing. It shared that the wet weather should have moved on out by noon, making way for sunny skies.

Ummmm, not so much. That light drizzle turned into sheets and waves of moderate misty, wind-blown rain which quickly had me running for that “rock star parking spot” to grab umbrellas for all of us. The kind of wind-blown rain that was falling made the umbrellas only protection for our heads as everything else was getting soaked.

Here’s a photo from Saturday.

A short clip…you can see the rain coming down.

After hearing part of one race and MAYBE being there for 45 minutes, we all headed back to my truck and we drove the two-minute drive to Bodegas in Banner Elk for lunch. We had a perfect view of wave after wave of misty rain that continued until we left around 2pm and headed home.

As happened last Sunday – TODAY is a gorgeous day. One look at the LIVE HWY 184 Camera will tell you that it is pretty breezy, but sunny, which should allow for a more enjoyable second day of woolly worm races, food and fun.

Actually, festival promoters and those who braved the elements on Saturday will tell you that things actually turned quite nice later in the day as the sun came out and temps dropped after 3pm or so.

“THAT’S OKAY, YOU LIVE THERE”…

I have already shared my abbreviated Oktoberfest and Woolly Worm stories with a few family and friends who live off the mountain and they all shared the same ‘argument’ of – “Well, you live there so you get to see all of the fall color and beauty anytime you want.”

That is true…and I will say that THIS Autumn has been on of the more beautiful ones in years. According to many fall color experts, we are still a few cold nights away from peak color at most of the High Country elevations. Peaks like up on top of Beech Mountain are already just past peak color, but still quite beautiful. Ditto that for locations in the highest elevations of West Virginia and Maryland.

Peak fall color is probably taking place elsewhere around the mountains of Western North Carolina, Virginia, Tennessee and most West Virginia locations right now through the end of this next week. So you still have a good week or so of peak color season left.

RESORTCAMS.com is YOUR ONE-STOP LOCALE TO SEE ALL THE COLOR VIRTUALLY

Also, Mark Moody of Canaan Valley Resort has been sharing some sweet videos from West Virginia. Check out HIS latest:

This was my favorite of Mark’s this Fall:

Here’s a teaser of sorts.

As most of our loyal followers know, we have a ton of valuable resources available to us here at SkiSoutheast. Not only do we have our own, resident meteorologist – Brad Panovich, but thanks to Joe Stevens and his weather connections, we also have meteorologists Sean Sublette, Joe Murgo, Doug Harlow, Brandon Butcher, Dave Osterberg, Spencer Atkins, and the “Skiing Weatherman”, Herb Stevens.

That is EIGHT meteorologists! No other ski portal brings you more! On top of that we have our own Kenny Griffin and then there’s the always, ultra reliable Woolly Worm!

We’ve always paid close attention to the Old Farmer’s Almanac around here and they, along with other sources are forecasting a “battle ground” kind of winter. We will share all the details in the coming days, but the summary is that we may see 10%-20% less snowfall than that of the last twenty year averages, but perhaps a bit more than we’ve seen over the last ten years.

As many of you will remember, LAST ski & snowboarding season was one of the best in recent memory as some mountain locations like Beech Mountain saw 78″ of natural snow – or about normal. While Canaan Valley, Timberline Mountain and Snowshoe saw far less than normal (111″ of the normal 180″ +/-) it was still an amazing winter with well-timed cold snaps and tons of awesome snowmaking.

Our AccuWeather friends are sharing this Snow Forecast map: 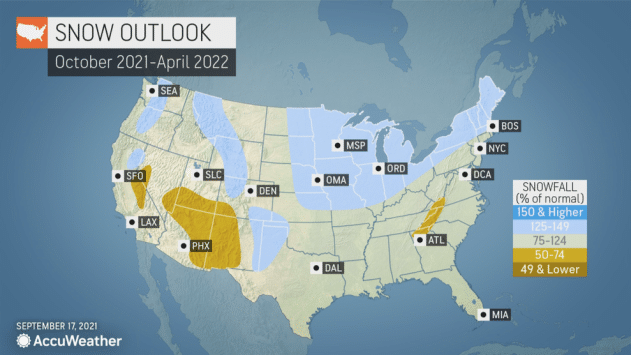 As of this post (Sunday morning, October 17th) there’s been no release of the winter forecast from the winning worm, but we will get you all of those winter forecasts and more in the next few days.