“Opening as Soon as Weather Permits” 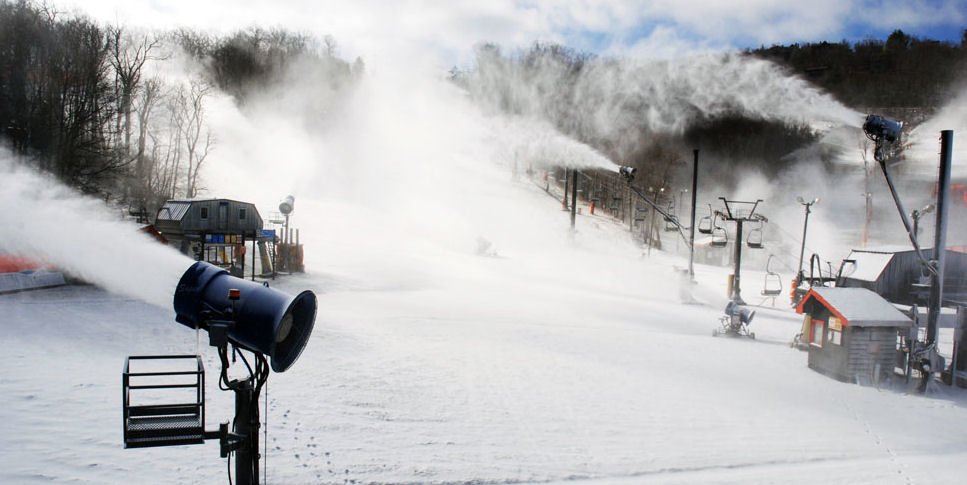 Appalachian Ski Mountain HAD PLANNED to open tomorrow, Friday the 20th, but those plans are now pushed back at least a few days. Of course Sugar Mountain Resort and Cataloochee Ski Area WERE open early this week – Sugar for one day and Cataloochee for four.

After a deluge of rainfall hit the area on Wednesday, there is little snow left on either Sugar or Cat.

So now ALL of the ski areas are now monitoring the weather forecasts and will be opening “as soon as the weather permits” them to.

Snowshoe Mountain’s Shawn Cassell, who serves the mountain as their new PR Specialist, emailed me that they too are now postponing their intended opening date of November 25th.

The message posted on the front of their website says, “As you might have noticed, we have experienced an unusually warm November up to this point, and our snowmaking operations have been limited. Unfortunately, we do not anticipate being able to open on-slope activities by our forecasted Opening Day of November 25th. We will continue to monitor the weather and provide updates on a tentative opening day.”

Here’s Where SkiSoutheast.com Earns Our Stripes…

Okay, so right now things don’t look so look. However it IS November and things have TRADITIONALLY not really gotten cranked up until Thanksgiving or after anyway. We understand that there are those who would hope for some Thanksgiving weekend skiing and while there probably won’t be at many of the ski areas…there STILL COULD BE some skiing and snowboarding to be found for this next week.

We’re thinking right now that resorts will be able to make snow again (and some for the first time) Friday or Saturday night (Nov 20 & 21st) and snowmaking ops look really good for Sunday night. With two to three evenings of snowmaking, we’d EXPECT Cataloochee Ski Area AND Sugar Mountain Resort to reopen as early as Sunday or Monday and with sunny skies through the next week – we THINK that they will operate for Thanksgiving Day and MAYBE they’ll be open through the following weekend.

That IS somewhat of an educated guess because (unfortunately) some milder air will filter back in again Friday, November 27th and last a few days – perhaps into December 1st.

Appalachian Ski Mountain WILL PROBABLY get in on that opening salvo of snowmaking as temps LOOK like they’ll make snow Saturday night through perhaps on Tuesday and MAYBE even Wednesday night so you COULD see their opening day on Thanksgiving Day.

Again – this IS only an educated guess, because with some milder air filtering back in after Thanksgiving, we COULD see resorts opt to hold until more consistent snowmaking temps hit the area.

Appalachian can create a freakin’ blizzard across their entire mountain with good snowmaking ops and we think you’ll see some good terrain to play on when they do open.

No word on Beech Mountain Resort just yet, but we’ll see if we can get an update from up there and provide the news to you guys.

As to the ski resorts into Virginia and West Virginia – they tend to hold out and open more terrain all at once. As Shawn Cassell related, “We know that (the delayed opening) is disappointing news for your audience, but as you know we have high standards for our on-snow product and won’t be opening (with anything less than good terrain and a fair amount of it).”

They will be celebrating the long holiday weekend there with a great Thanksgiving family dinner at The Junction restaurant, along with the annual village tree lighting ceremony, family photos with a bigger-than-life Thanksgiving Turkey, and great live music in The Big Top. Snowshoe will also be holding their first-ever “No Kill” Turkey Pardon Shooting Competition in Snowshoe’s Sporting Clay Center.

So When Will Winter Arrive? It is MORE IMPORTANT THAN EVER to Visit SkiSoutheast.com OFTEN. Here’s Why…

Forecasters continue to call for a long, colder and wetter winter ahead of us. We’ve seen firsthand the powder benefits of the true El Nino pattern that weather experts have been talking about since last winter ended. Winter is coming. We have every reason to believe it’s going to be a big one.

Our meteorologist, Brad Panovich has shared his winter forecast (as have many) and they are all pointing to a rather volatile winter with a lot of moisture and temps that should average 1-3° below normal.

However, we want to shoot you guys straight. With a lot of moisture comes cloud cover and that, by itself, can create scenarios where the average temperatures are 1-3° below normal. However that doesn’t mean that every day of winter will be frigid, snow making days.

For example, the historical average temps for Appalachian Ski Mountain in December is for an average HIGH of 42° and a low of 25°. So it could be 39° and provide that 1-3° colder than normal and STILL not be conducive for snowfall or snowmaking.

All indications point to this winter being a VERY snowy one, but as Brad Panovich shared in his 2015-2016 Winter Forecast, he tends to think that we’ll have several larger storms that could provide much more snow than normal – HOWEVER he doesn’t feel that it necessarily means consistently cold and snowy. His take on the long-range, El Nino affected winter was that this could be a struggle at times for optimal conditions.

So visiting us and checking in on the daily forecasts and snow reports is more crucial than ever.

Look – winter will come. Snow will as well. The patterns so far have really caused some major dumpings on Colorado. That pattern will shift and allow colder air to filter in and we’ll see our cold and snow as we get into December.

So if you’re Jonesing for some skiing or snowboarding, watch the updates over this weekend and get your gear ready to head to the North Carolina mountains next week. We think there will be 2-3 ski areas operating at least by Tuesday-Wednesday-Thursday.

…and revisit often as we get into early December. The cold is coming. It ALWAYS does.