Sugar Mountain WILL OPEN AT 10AM today and Cataloochee Ski Area to Open at 1pm!

We anticipated this happening.  Sugar Mountain will drop their ropes and open at 10am today, beating Cataloochee Ski Area by three hours to claim the right to say that they were the first to open in the Southeast and Mid Atlantic for the 2009-2010 ski season.

At 7:19am it is 21.4° at the summit of Sugar Mountain. It is 26° at the base and they are cranking out a snow cloud. For that matter between Mother Nature’s dense "snog" (snow fog) and the snowguns blasting away at all of the ski areas, you can’t see much of anything via the ski resort webcams! Check out most any of the webcam views this AM and all you can really see is icing on most of the enclosures. But icing is GOOD. That means the ground is cold and getting colder by the base that the resorts are laying down.

A lot of people are emailing us asking about App’s base cam being down. We are not in control of that one. Brian from App was up there the other day doing some network work and perhaps he inadvertently made a change that isn’t allowing the camera to update because we can’t access one of our own new cameras which we installed this week up on then mid-station lift house. (Yes, we installed a new LIVE, streaming camera at Appalachian. More about that later.)

Let’s get to the important stuff for now and we’ll revisit the cameras and get you some updates later. For now, check out www.HighCountryWebCams.com  for an array of cam views that will allow you to see some snow.

This is the first morning of the 2009-2010 Ski Season as at least Cataloochee Ski Area will be opening. So we’re having some fun today! Let’s get to the updates on snow, snowmaking and openings. 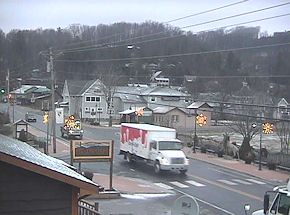 <Hwy 184 this morning. You have to look close or visit the live cam to see the dusting!

Everyone wants to know about the snow. I am traveling today but I can tell you by the conversations I’ve had and a glance at the cameras, no snow fell below 3200 feet. My office webcam show ZERO snow. Ditto the Blowing Rock camera across from Chetola and the Boone Overlook cam on Howard’s Knob. Not even a heavy frost. The Banner Elk 184 Camera showed some nice coverage last night but as of 8am this morning it looks like not much more than a dusting to perhaps one-half an inch of snow is on the ground. 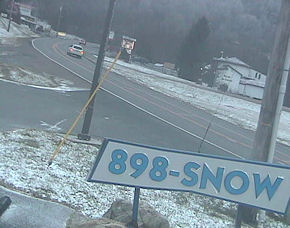 Same for the Extreme Snowboard & Ski Cam across from Sugar. Just enough snow to create some excitement (perhaps a 1/2 inch at the entrance of Sugar).

We had a bit more snow (an inch) atop Beech Mountain this AM and we have some images of that via the LIVE CAMS as well.

For now, let’s get to the good stuff>

CATALOOCHEE IS OPENING TODAY AT 1PM and Sugar Mountain will make that decision around 9am this morning!

Cataloochee Ski Area – 23.5° – Making Snow! – They will be opening at 1pm today! We will update with base and number of trails shortly after 9am.

Sugar Mountain – 21.9° – Making Snow! THEY WILL OPEN AT 10AM Today. They are not reporting any natural snow this AM, but they did receive from .5" at the base to about an inch up top according to our reporters. There is no update this morning about an opening. 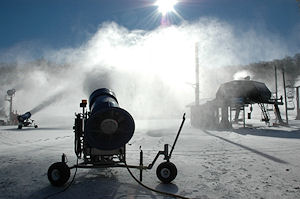 Appalachian Ski Mountain – 26° – Making Snow! – They are creating some base and will not be opening today. Stay tuned for opening day announcements as they will allow the first 100 skiers/snowboarders that show up to ski free that day.

Ski Beech – 23° – Making Snow! They received 1" of natural snow and 3" on the season. They had an amazing cloud of snow being made across all of Shawneehaw, Powder Bowl and much of the top of the mountain last night. We have a live, streaming cam up top and we’re seeing a lot of action going on. More about that camera later.

Wolf Ridge / Wolf Laurel – 36° – NO SNOWMAKING – No Natural Snow and no report as to an opening date.

That’s it for the North Carolina Resorts. For more information and updates click over to www.SkiSoutheast.com. We’ll have all of those announcements, snow totals and more online by 9am.

IF YOU’RE SKIING OR RIDING TODAY AT CATALOOCHEE (or Sugar if they open) we’d appreciate some photos, videos and comments/reports!