Good Morning! It’s Tuesday, February 8th and IT’S SNOWING AGAIN!! Hip Hip Hooray! It’s been several day since we’ve any real white stuff here in the North Carolina mountains and I must say it’s been kind of nice to see it again. And lord knows the ski areas could really use some sustained cold temperatures and a little help from the lady in charge – Mother Nature. All this talk about blizzards over the last few days really has me in the mood for some major winter weather!! How does a foot or so sound? It’s not in the picture now but the winter is still young.

This snow event is just the first of the week. More snow is in the forecast for Wednesday and into Thursday. Ray’s Weather indicates that the rest of this week is going to be….COLD!! This is a great sign for snowmaking. Appalachian’s website said that snowmaking would begin this morning on Candied Appal and AppalJack and would continue on all surfaces after the slopes close. This cold blast is welcome following several days of milder temperatures and a very mild weekend. All of the ski areas in the southeast and mid-Atlantic will be taking advantage of the colder temperatures!

Just in late last night we have a new video forecast from our resident weather-dude Brad Panovich. The next storm we’re looking at for the region comes in late Wednesday and into Thursday and it looks like the North Carolina ski areas may benefit most from this system. It’s shaping up to be a good news-bad news kind of week. Great snow early this week and later in the week and into the weekend it’s looking like the beginning of a pretty significant warming trend. Brad does indicate that he thinks there will be one more blast of cold and snow before the season is over – and it could be right around the beginning of March. What did I tell you about March? Maybe we’ll end up with another major March snow event!

As we’re looking at the possibility of the first extended thaw of the season I am certain we’ll end up with tons of questions like, "is there any snow left?" or "can we still ski even though it’s 50 degrees out?" or "we’re coming in early March, will the slopes still be open?" People – this is when we flash back to all the conversations about base depth. The

answer is yes to all of those!!!

Also, I’d like to tell all the skiers and snowboarders to continually complain about daytime snowmaking to get over it. The reason we are able to ski until late March and early April is that ski areas DO take advantage of the cold temperatures when they can. All season long people have been talking about the great thaw that’s coming or the mild winter, well, we may indeed have a thaw period this month, so it’s crucial that ski areas make snow when they are able. THEY DO IT FOR US!!

Let’s have a glance around…

Appalachian Ski Mountain – Open today on 100% of the mountain with selective snowmaking on AppalJack and Candied Appal – more snowmaking on other terrain will start after the slopes close. App got .3 inches of fresh snow last night, just enough to coat the slopes!

Beech Mountain – Open on 100% of the mountain with snowmaking in progress!! Beech got 1.8 inches of new snow so surface conditions should be excellent. Beech will likely be making snow all week as temperatures will allow in preparation for this weekend’s College Fest!

Cataloochee – Cataloochee is 100% open today after overnight snowmaking. Conditions out there should be awesome!! Here’s what Cataloochee has to say about their terrain parks… "in the CCTP Progression Park…24′ Down Box, 24′ Up/Flat Box, 12′ OG Rail, 24′ Down Rail w/ Snow Staircase, 16′ Battleship Rail, 10′ Kid-Friendly Flat Rail, 16′ Kid-Friendly Flat Box, 8′ Jam Rail, and 18′ x 3′ Culvert. AND… in the Upper CCTP Park…AN ALL NEW SETUP! along with the 30′ Step Down Gap Jump w/ 25′ to the knuckle and 5′ to the sweeeeeeeeeeeeeeeeeeeeeeeeeeet spot! PLUS…new kid’s (read that…adults, too!) Fun Jump! Thanks to our rockin’ CCTP crew for shakin’ up the house and making it happen!!" That’s awesome – it’s great to see that the folks at Cataloochee are super-stoked about their terrain park staff!

Sugar Mountain – 100% open today and snowmaking is in progress. Sugar got 1.2 inches of fresh snow so slope and trail conditions today should be great!

Wolf Ridge Resort – Open today on 13 of 23 slopes. More terrain will open up this weekend! They got about 2 inches of new snow so conditions should be great at the Wolf today as well!!

It’s great to see that the North Carolina ski areas have gotten a bit of snow. There for a while it was nothing but ZEROS and that can be a bit depressing first thing in the morning when you don’t have anything exciting to talk about. So, let’s hope this is not the end of the snow. It’s now 8:45am and it’s still snowing in Foscoe!!

Conditions should be great across the board today at all of the North Carolina ski areas, so if you’re out there, have fun and take some pictures!!

Send me your stuff…I’d love to hear from you… [email protected] and remember to…THINK COLD!! THINK SNOW!! The more snow vibes we put out there into the world the better the chances! 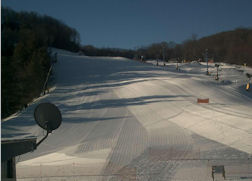 If you have a few minutes be sure to check out our other websites… www.HighCountryWeather.com and www.HighCountryWebcams.com. The webcams are a great resource for getting up to the minute images of what’s going on across the area.

<< This is a captured shot from this morning taken using our live camera down at Cataloochee!