From eight-tenths to one inch of snow has fallen across the state overnight and we could see some breaks in the clouds and some residual snow flurries on Tuesday across Western NC.

More importantly – snowmaking is happening across the state and conditions look great for today all the way through early next week. If you’ve been contemplating a ski getaway – this weekend is the one. Get your gear and your rear to the mountains. More snow (maybe even huge snow) is on the way.

It is now 10:34am as I’ve just finished speaking with several of our contacts around the region to get insight as to how much snow has fallen and where. One cool thing that I noticed as we toured the area’s websites is that several of the ski resorts which had not adjusted base depths during the last 12 days of January thaw – finally did. Hey, it’s better late than never.

So now that the temps have nosedived we’ll see base depths going up! All of the resorts look GREAT this morning and skiing and snowboarding wherever you choose to ride will be sweet today. 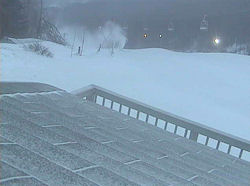 <Top of Big Red this AM. A dusting to an inch of snow fell and snowmaking is happening!

I took some time to tour the area’s live webcams this morning and spent a lot of time up top at Sugar watching them groom Big Red and also watching the snow gun that they have positioned in the middle of the trail blasting the top with snow. There’s no question that Gunther’s crew can work and groom the snow as good as any resort in the country and from the look of Big Red this morning they will have some sweet corduroy coverage.

There’s also no doubt that any small areas of thin coverage and/or bare spots are now history. There was already a ton of snow on all of the mountains, so it didn’t take much to make those little blemishes in the snow disappear!

Our Chief Meteorologist Brad Panovich provides a new Skier’s Forecast video this morning. Brad was busy late this past weekend and Monday detailing coverage of the flooding rains and was delayed getting his latest update to us but he’s got it this morning. 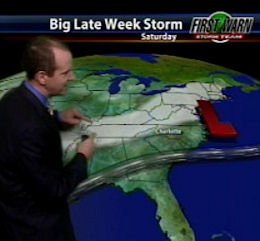 The summary is that cold and snow has returned with a vengence after twelve straight days of milder-than-desired temperatures and way too much in the way of under-developed snow. Brad shares that it is going to get progressively colder as the week goes forward and we have the potential of a major winter storm in the forecast!

This morning we are seeing northwest flow snows that have already dropped anywhere from an inch of snow at Beech and Sugar Mountain,

Brad says that we should see some snow through Wednesday at many locations. We’ll get a little "break" on Wednesday and then the possibility of a huge storm on Thursday into Friday. Brad thinks that this next system will begin as some rain in some locations into the North Carolina mountains and then turn over to some significant snow that may develop by Friday and into the upcoming weekend. Brad stated the words "huge storm" numerous times in his Skier’s Forecast video.

Now for the BIG STORM POTENTIAL…

Brad shared that the way things are shaping up as of this morning it looks like the next storm track will come in the same kind of setup that we had back in mid December where HUGE snows fell across the region.

Either way we should see some significant snowfall Friday and into the weekend. 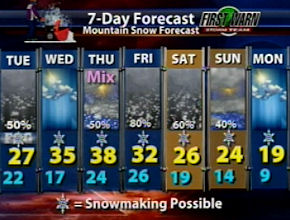 …and we should see very cold temperatures for the snowmakers to do their thing! It looks like most ski areas will be able to make snow all day today as highs are expected to stay sub freezing. Lows tonight should be in the teens. Wednesday and Thursday look nice with highs in the 30s to near 40° at many locations but dip back into the teens and low 20s each night. Then Friday and the entire weekend is going to be FRIGID with snow! Computer models are in agreement at this time for a significant snowstorm in NW NC and SW VA…into West Virginia and Wisp!

STAY TUNED and if you’re heading to the mountains this weekend, pack layers and make sure your 4WD is in good shape! Buy your chains off the mountain as most places that typically carry them are out of a lot of sizes.

A COCORAHS KIND OF DAY!!

We’ve had natural snow on the ground for more than a month and a half now and with more snow falling you’re going to enjoy your trip to the mountains this week and weekend! Anytime we get natural snow these days it takes me about an hour longer to visit all of the COCORAHS reporting stations and official stations like David Lesher’s that provide accurate snow measuring. That the best way we know to be able to update our 24, 48 and 72 hour snowfall totals that we share on the front page of the site. Obviously looking at the live webcams helps because we can sit here in our offices and pan, tilt and zoom into several locations close to the cameras and get a bird’s eye view of how much snow is where. 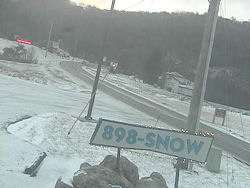 <Live shot this AM at the foot of Sugar shows a nice dusting to one inch of new snow.

We received word from two sources this morning and zoomed our 24 power zoom cams around and we’re seeing the exact same snowfall at Sugar as at Beech this morning. Tom Brays is in a condo at The Reserve atop Sugar Mountain and he reported in with his official snow measuring of – you guessed it – .8" of snow. There wasn’t a ton of wind last night but there are some drifting areas where you can find about 2" of snow to ball up into a snow ball, but most of the snows atop and bottom of Beech and Sugar are in the dusting to 1" variety so if you’re headed up that way look for an inch of snow. You won’t find a 2" blanket of snow – just yet. Later in the week – WE HOPE SO!!!

By the way, this .8" of snow brings Beech Mountain to 25" of snow since January 1st and a little over 51" on the season. It has been a good one to date! …and more is on the way!

Let’s go ahead and do a tour today and show a reporting of natural snowfall and temps this morning. Check the SNOW REPORT for all of the other details.

Appalachian Ski Mountain – 21° – About 1/2 inch of snow and they made snow and added 2" to the base overnight. (We’re on the way back up!) App is 100% open with ice skating and all terrain parks operating! Groomed conditions! App has seen 40" of snow thus far this season.

Beech Mountain Resort – 25° – .8" new snow – Beech has closed the Oz Run and Upper Southern Star to focus snowmaking ops on them. They are open today and tonight with 12 of 14 trails, their terrain park on the Powder Bowl and of course Robbins Run, White Lightning and their other popular trails. Tubing is not open today. Beech has received 51.5" of snow so far this season.

Cataloochee Ski Area – 19° – About a 1/2 inch of snow and they are making snow and added 3" to their base report. They are 100% open with all 16 trails for day and night sessions. No tubing until later in the week. They’ve seen 35.4" of snow thus far this season!

Sugar Mountain – 18° – .8" new snow – Sugar is 100% open with manmade powder and groomed conditions on all 20 trails. They have their tubing park closed for today for dedicated snowmaking. Sugar has seen 47.8" of snow on the season to date and about 25" of snow since January 1st.

Wolf Ridge Resort – 18° – 1" of new snow according the COCORAHS reporter there – They made snow and have 15 of 20 trails open. Tubing and Terrain Park is open as well. Wolf is reporting "several" inches of snow on their website and 2" on another reporting service. The COCORAHS report jives with the Wolf Laurel POA website which is reporting "…all roads are lightly snow covered from last evening." They’ve seen 39.2" of snow on the season.

Sapphire Valley – 23° – No new snow according to the Transylvania County COCORAHS reporters. – Despite reports to the contrary on some regional and national reporting services, Sapphire Valley is NOT OPEN TODAY as they do not operate Tuesday through Thursdays. They will reopen Friday at noon. They’ve seen 9" of snowfall to date.

Hawksnest’s tubing park is CLOSED TUESDAY. They are making snow and will reopen on Wednesday.

You’ll have to visit www.SkiSoutheast.com today to see where it is still snowing and who got how much! We share more photos of the day as well as videos on that side as well.

We’re on day 60 and there are 77 more days of opportunities to enjoy the snow for the 2009-2010 ski and snowboarding season!

Previous Post
3rd Rail JAM Contestant at Beech Mountain on Saturday January the 23.
Next Post
Up to 3 inches of Snow Falls! Snowmaking Restarts! HUGE SNOW on the way?