North Carolina Resorts Look to Make Snow Around the Clock

Only Sapphire Valley in North Carolina is not making snow this morning. It is 27° and plenty cold enough to be making snow at Sapphire but they are not. According to Wendy over there, the wind was blowing so hard that it just wouldn’t have been productive.

NO ANIMALS WERE HARMED DURING THE WRITING OF TODAY’S STORY

It is WINDY out there! I looked around at the 6,325 weather stations that Dr. Ray and other weather gurus have dotted all across the state and the highest wind speed that I could find overnight was up on Linville Ridge’s peak where they recorded a 33 mph wind. Sugar’s summit station recorded a 30 mph top wind. I’d love to know what the top wind speed was atop Grandfather Mountain. The back side of my home faces Grandfather and we have a wind tunnel effect that blasts us everytime there’s a wind event like we experienced overnight and all I know is that I woke up with my bed facing in the wrong direction this morning!

I’d almost swear that I saw "Auntie Em" biking in the night sky last night. Come to think of it I’m almost certain I saw my four wheeler, my dog "Dakota" (a Husky/Shepherd mix) who is prone to flying under NORMAL circumstances all flying in the howling winds.

Regardless, the ski areas are all making snow and most should be able to make snow around the clock from now through sometime on Saturday. That is GREAT news here on December 10th as we need all the snowmaking ops we can get. Resorts should be able to make snow again Saturday night but that will be borderline for some ski areas and then it may be Tuesday night before they get another chance. Wednesday night and beyond looks cold so we’ll keep the faith.

On Wednesday at about lunchtime I found myself roasting in my own office so I got up and checked the central air/heat and although it was set on 69° it was 76° in the office. I opened the window in my own office and it stayed open all day. That’s how nice it was outside around the higher elevations of North Carolina. I personally saw a high temp of 56°.

This weekend will look a whole lot more like a traditional ski season with more terrain and more resorts open and operating.

Beech Mountain Resort is operating with THREE slopes open for today. (Some reports are incorrectly reflecting 4 trails open.) Talia Freeman, Beech’s Marketing Director, reports, "Upper Shawneehaw and the High-Speed Quad will be making their season debut this Friday, 12/11/09. Beech Mountain Resort will start night skiing this Saturday with the Ice Skating Rink and the Beech Tree Restaurant also opening. The Beech Tree will jump start the season with Standard Films 2009 video premier of Black Winter, a snowboarding film highlighting some of the most progressive riders in the industry. The showing starts at 8:00pm and will feature music and fun for all ages. Slope tickets will be $30.00 for all-day and twilight tickets and $20.00 for half-day and night tickets. We look forward to seeing everyone here this weekend!"

You heard her people! Get up to Beech and enjoy the fun and what should be very nice conditions.

TOWER CAM BEING TWEAKED AT BEECH

We installed a quad lift tower cam at Beech last week and after just a few days the wireless transmitter stopped working. A couple of members of our team (Paul Huffman and Chase Hendley) were up there on top of the quad tower with the winds howling – trying to get that working on Wednesday. We were not happy with the supposed, super powered Canon camera so we replaced that with a newer Panasonic pan, tilt and zoom cam. Paul and Chase are planning on heading back up in these frigid temps and winds today and if they don’t get blown off the tower we should have some big screen live shots of people riding the quad up the mountain for you guys.

Don’t forget that Sugar Mountain is celebrating SugarFest this weekend, December 12th and 13th. Both Saturday and Sunday from 9:00 am until 3:30 pm 2009 ski & snowboard equipment will be available for demo from Salomon, Volkl, Nordica, Burton, Head, Never Summer, K2, Atomic, Dynastar, Rossignol, Ride, Line, Fisher and Forum. You must have a valid driver’s license or credit card in order to demo the equipment.

Watch 1992 Olympic Figure Skating Silver Medalist, Paul Wylie dazzle us with his amazing talent followed by an on ice skating clinic and a meet and greet session Saturday 10 am and 1 pm on Sugar’s ice rink located next to the Dave Nixon Pro Shop adjacent to parking lot D.

More information and a schedule of events is forthcoming. 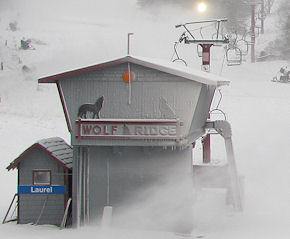 <Their own signage reads "Wolf Ridge"

The ski area was called Wolf Laurel for years, but two seasons ago they changed their name to Wolf Ridge Ski Resort which coincided with some growth up top, etc. The area is still known as Wolf Laurel, but the ski area IS called Wolf Ridge. Even one of our own clients who operates a real estate business there told me that nobody in the area calls it Wolf Ridge, because it is called Wolf Laurel. (Does it seem that I’m trying to use the word "wolf" as many times as possible?)

As you can see from the accompanying photo submitted to us by Todd Mingus, the resort is called Wolf Ridge.

Anyway, I heard from Marketing Director, Rick Bussey on Wednesday and I plan on speaking with him about "What’s New at Wolf" later today but he did inform me that they have a number of beautifully designed rustic log homes include picturesque mountain views from wraparound decks, full kitchens, large living spaces with fireplaces and three or four bedrooms located at the top of the mountain. You can also swim in the sky-high, glass-enclosed, heated pool year-round. They have added 8 new furnished townhomes that will sleep up to 16 people overlooking the Breakaway ski slope. These units are great for groups and large family gatherings!

For more information or to make a reservation, please contact Scenic Wolf Resort at 877-828-9653 or www.scenicwolfresort.com

That’s it for today for the North Carolina Report. Feel free to check www.SkiSoutheast.com for all the news and reports for all of the Southeast ski resorts.

Be sure to click over to www.SkiSoutheast.com  to see important information about ALL of the Southeast and Mid Atlantic ski resorts. You can check the snow reports for all of the ski resorts of
West Virginia, Virginia, Maryland, Tennessee and North Carolina via
https://www.skisoutheast.com/skireports.php  as well as videos, photos and more.