It is snowing at Sun Valley. The manna from the skies is a welcome development, insuring fresh powder for the rest of our stay here. A graceful white swan is swimming by in the pond across from my window.

We are staying in the historic Sun Valley Lodge. It is luxurious and elegant, filled with history. The hallways are festooned with photos of founder Averill Harriman, the early Kennedy and Gerald Ford Clan, and famous skiers, skaters, and movie stars. There were no snowboarders in those days, but the early skis were wide and long. The resort opened in 1936 and was one of the first in the nation.

NASJA is an organization of dedicated snowsports writers from around the nation. The name says it all – The North American Snowsports Journalists Association. About 110 of us made our way to this year’s convention. And, we do so on our own money – this is not a freebie. We come because we are dedicated to the mountains, the snow, nature, and the sports they bring with them. In addition to snowboarding and skiing, we have many events, speakers, visits, and lectures – all in hopes of making our reports more interesting to you.

First – a bit about Sun Valley. It is huge and steep, but there are many wide and groomed trails. The “green” classifications here translate to blue in other areas. But with their wide expanse, and relatively few crowds (at this time) they are all manageable. Fortunately, Sun Valley provided its visitors a great experience at a competitive time. Most Western ski areas mark down their prices in these final weeks (Sun Valley also has lodging and lift discounts). Colorado and other parts of the West got more snow this year, but Sun Valley held its own. There were many people here who tell us we actually got more snow in the East this year than they did. If so, we accept the honor!

On this, our first day, we tried to stick to the easier trails. But they were hard packed and a bit icy in the morning. Then the snow moved in, and we reached whiteout conditions on the top. We took the new Roundhouse Gondola and a chair to high up in the mountain. Our special thanks to ski instructor Jim McCabe, who escorted us up and gave us private instruction. He has been skiing this resort since 1948. But, when we skied back to the Gondola, he suggested we download because of the bad visibility. We hope to make it all the way down later in the week – with visibility and fresh powder!

We had another special treat, when we tried out a pair of new, special suspension skis. The new innovation was introduced to us by Wayne Wong and Anton Wilson. Charles tried them out, and did a magnificent job. He stood up straight and danced down the mountain! I will sample them later. The suspension skis help you turn and cut through ice or powder conditions. They require less knee effort. Everyone who tried them appeared to be impressed. They are expensive now, but perhaps their price will come down if they catch on and become popular. 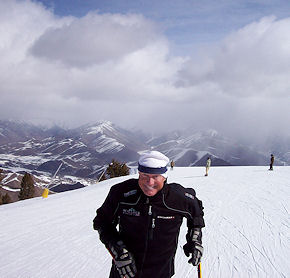 In other events, we had presentations from Dick Fosbury, former President of the World Olympians Association, 1968 Gold medalist in high jump, and still an Olympics official. We also heard from Don Wiseman, who emphasized the ways the sports racing teams bring more customers to a resort and to the close by communities. Finally, we met an amazing man who is a true inspiration. He is the Winter Sales Manager of the Sun Valley Company, Mark Thoreson. After years as an expert skier and surfer, he suffered a debilitating inner ear nerve disease after routine knee surgery. For years, he was unable to ski because of constant vertigo. He learned to ski again with outriggers – the ski poles with small skis on the bottom. Now he is an expert skier again, and shows a special interest in adaptive skiers and those who have to make a special effort to overcome adversity. He is definitely worth meeting on a visit to Sun Valley.

The conditions at Sun Valley Idaho could not get much better for this time of the year. The sun is shining, the slopes are gleaming, and the snowsports are fantastic. What a terrific time for a convention of snowsports journalists. Early this morning, I walked through the pine trees from the Lodge to the Inn at Sun Valley. It was 7 am, and the lightbulbs were still on on the trees. The ski slopes of the mountains were starting to appear, as the sun came up. An owl was hooting and saying farewell to the night. Even at that early hour, the temperature was mild.

Inside the Inn, another wonderful breakfast buffet awaited us. One of our speakers was writer and former ski champion Dick Dorworth. He is now a colorful writer, speaker, and sportsman. In 1963 he set a record by skiing 106 mph in Portillo, Chile. He thought it was fast at the time, but the men’s record is now 156 mph and 152 for women. Our NASJA group had its own fun race on Friday, but did not hit those speeds!

After breakfast and meetings, we went our own way on the slopes, taking a convenient, free shuttle bus. The runs from the mountain seemed endless to me, with a 3,300 vertical drop from the topchairs and 1,500 from the top of the Gondola. The top of Bald Mountain is 9,150 feet. In addition to being long, the trails have a steady descent, with few natural places to pause and rest en route. I was having a great time but kept wondering if the trails were ever going to end. My heart was pounding, and I was scared of the unknown mountain. But, our inspiring friend Mark Thoreson took us down, gave us instruction, and encouraged me. Everyone who passed him cheered him on. Most of the residents of Sun Valley know about his stuggle to return to skiing, and understand he still suffers from dizziness and nausea. They greeted him and call him a true hero of the mountain.

There were a variety of programs on going, as there are in most major resorts. But we were most impressed with their adaptive ski and wounded warrior programs. We spent some time with Adaptive Program Director Cara Barret and Tom Iselin, the Founder and Executive Director of “Higher Ground,” their adaptive program for Wounded Warriors. They bring out about 100 wounded warriors and their families for six day assisted camps, with eight such camps a year. They seek to council and treat the whole family, and have a special emphasis on brain injury and post traumatic stress disorder. As in all of these programs, support comes from donations, with no direct federal aid at this time.

After a full day of sports, many of the writers sampled the restaurants in the area, or headed to the spa and heated, outdoor swimming pools. Others headed to our computers to record the events of the day, and convey them to you. I’m sure you feel sorry for us!

The weather continues to be glorious, with the sun shining and warm temperatures. The trails are fast and hard packed, and the views are panoramic and breathtaking. From the top of Bald Mountain (9,150 feet) and Seattle Ridge, you see mile after mile of rugged mountains and some cities beyond. There is more than enough snow for us, but the residents are looking at Colorado with envy. It received about 18 inches of new snow in some resorts. Personally, I am happier to have the clear skies and great views for now. The new mountains and trails are challenging enough in the best conditions. Unfortunately, some of our group got hurt on the first day, when trying to navigate through snow and poor visibility. We lucked out on our last day of skiing. Still, I am glad to have made it down safely. Sun Valley is a challenging mountain, even for expert skiers and snowboarders. Thank you again to Charles, Mark Thoreson, and other fellow snow writers – they got me down safely. I managed to ski all three days without falling, but nearly lost it as I picked up speed on some of the cat walks. They are wide and long, but usually freak me out. In fact, I was so nervous on the mountain at first, I almost lost it due to panic. But, after a series of gondola and chair lifts, we made it to the Seattle Ridge Day Lodge. A small bit of wine and lunch with friends, as we took in the view, changed my attitude. I was fast and relaxed for the runs down.

The writers convention held several more events and meetings. One breakfast speaker was Lou Whittaker, who has climbed nearly every major mountain in the world – some many times. He runs a large guide service and mountain school and is an honorary member of the 10th Mountain Division. Another speaker was Brian Callahan, who is an expert in free style competitions. He makes films and supervises terrain parks. He says his mission now is “to make Sun Valley a top contender in the terrain park world.”

Later in the day, after the adventures in the mountains, the various regional NASJA groups held meetings, and then assembled into a large national meeting. There are many points of discussion, with one of the hottest topics centering on the type of membership. The criteria for accepting bloggers and independent writers and photographers is of prime importance, and has yet to be fully resolved. Another problem is the loss of some valuable members, because their publications have gone under or cut staff. The discussions mirrored the general turmoil in the reporting industry brought on by tough economic times.

After the meetings, a farewell dinner was held. Awards were given in many categories. There were also moving tributes to Mitch Kaplan and other beloved members who have died. We may have our disputes and controversies but, in the end, were are a close group of people who love the mountains, nature, adventure, and the snow. It produces a sense of unity and purpose which cannot be denied.

Happy trails to all!

Connie Lawn is known in some circles as "the skiing White House reporter".  Connie is the longest serving independent White House correspondent. In a career that has included authoring a book (“You Wake Me Each Morning”), she has faithfully reported from the White House for U.S. Presidential administrations from Lyndon Johnson through the present!  She has been covering the White House and the world since 1968. She’s also written blogs for several newspapers and ski websites.

Previous Post
Record High Temperatures Are Broken in the Mountains on Tuesday!
Next Post
Overnight Freezing Temperatures Return for Tonight and Friday night!