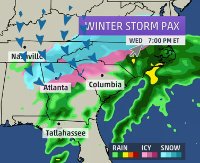 Happy Monday to everyone!  We have a rather interesting week shaping up weather-wise.  I’ll let the experts explain it…

Friday’s Ski Forecast from Brad Panovich gave us a heads up and it looks like it is coming together pretty much as expected.  If you missed Brad’s forecast, you can check it out on the front page of the site.  Brad’s next video forecast is tomorrow so make sure to keep an eye on the front page of the site for that.  We’ll send out a Tweet as well, so be sure to follow us on Twitter if you are not already.

I promised you guys a more thorough report from Wintergreen, so let’s get right to that.  I went with a few Virginia friends that I see a couple times a year if I’m lucky.  Avid skiers growing up (one a past instructor at Snowshoe – back in the day), they had not been in a NUMBER of years and it was cool being a part of that reawakening.  It was made all that much sweeter as we were delighted to have a little snow fall during our visit.  It was not a hard fall and it didn’t amount to anything, but it added to the ambiance. 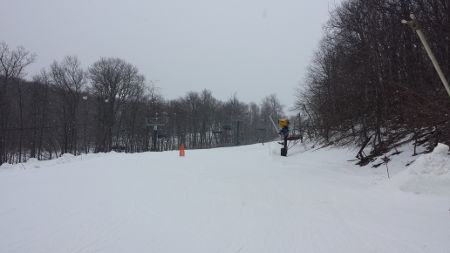 We started in the middle with Dobie and Diamond Hill.  The conditions were really good, with a nice soft layer of loose granular/manmade powder on top of a packed secondary.  After a few runs to make sure the mojo was still there, we headed over to the left side of the mountain where we were met with a crowd at the base of the Acorn lift – and it didn't take us too long to figure out why. 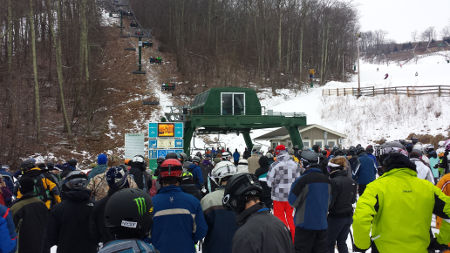 The snow, which had subsided a bit, returned as we headed to the top and it was wonderful.  We decided to bypass the blacks for the first run and headed down Tyro. 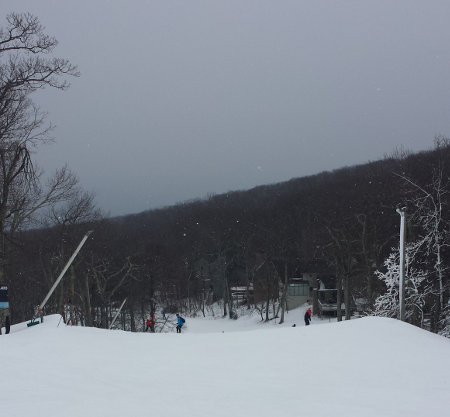 And let me tell you, that is one good run.  The surface was great and the crowds on the runs themselves were much lighter than from whence we just came.  Tyro turned out to be our favorite run for the day, a sentiment that was expressed at the bottom of just about every run.  There were quite a few kickers on the sides, and even a little drop-off.  We had a blast shooting off the lips on the sides which launched us up and back towards the other side of the slope where another was waiting for us.  You could practically ski the top third of the run from kicker to kicker.  It was a lot of fun!

The speed we picked up at the top lended into nice flowy GS turns in middle and bottom.  Our hearts were pumping at the bottom and the entire group had a smile on their faces – run after run. 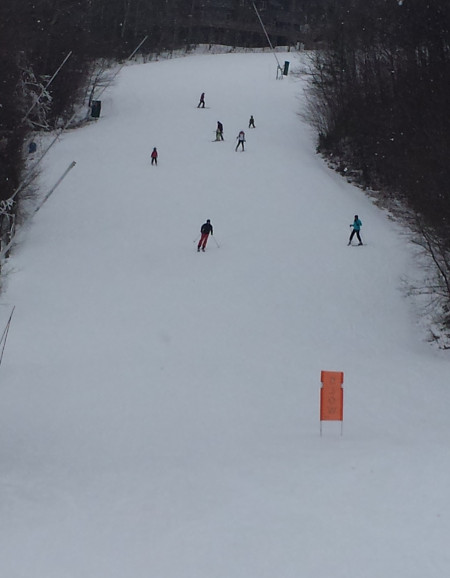 We took a couple runs down the blacks, Big Acorn and Upper Sunrise, as well but they just did not have the fun factor of Tyro.

After lunch with a few beers and minor shenanigans, we were back at it.  This time the sun greeted us. 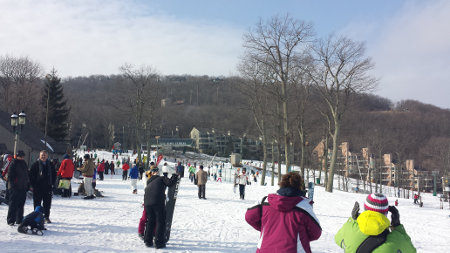 We felt pretty strong at this point due to the legs coming back and the performance enhancing drinks, so we decided to head to the Highlands and test out the diamonds over there.  It turns out that the Highland runs are probably better to hit in the morning rather than afternoon.  By the time we got there, it was around 3:00 or so, the nice top layer had all but been pushed down and aside exposing some bullet proof.  After a couple runs, we retreated to the comfort of Tyro again – but not before taking in the incredible view. 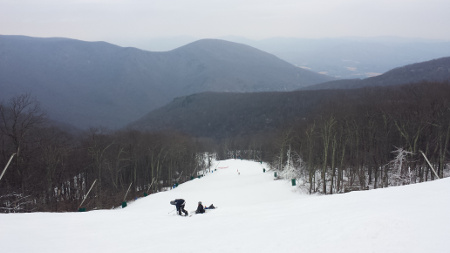 We had a wonderful trip to Wintergreen and I relished the opportunity to sit down and meet with some of the folk that make it all work.  We discussed a couple of promotion opportunities that will certainly benefit you and I look forward to working closely with them.

Before I go, I want to mention that I updated the events this morning and will continue to throughout the day.  Valentine’s Day is Friday and the big President’s Day weekend follows.  This is typically the second busiest weekend for the mountains and the resorts are not holding back – and hopefully Mother Nature will not hold back either this week.