MOTHER NATURE CAN BE A CHALLENGE 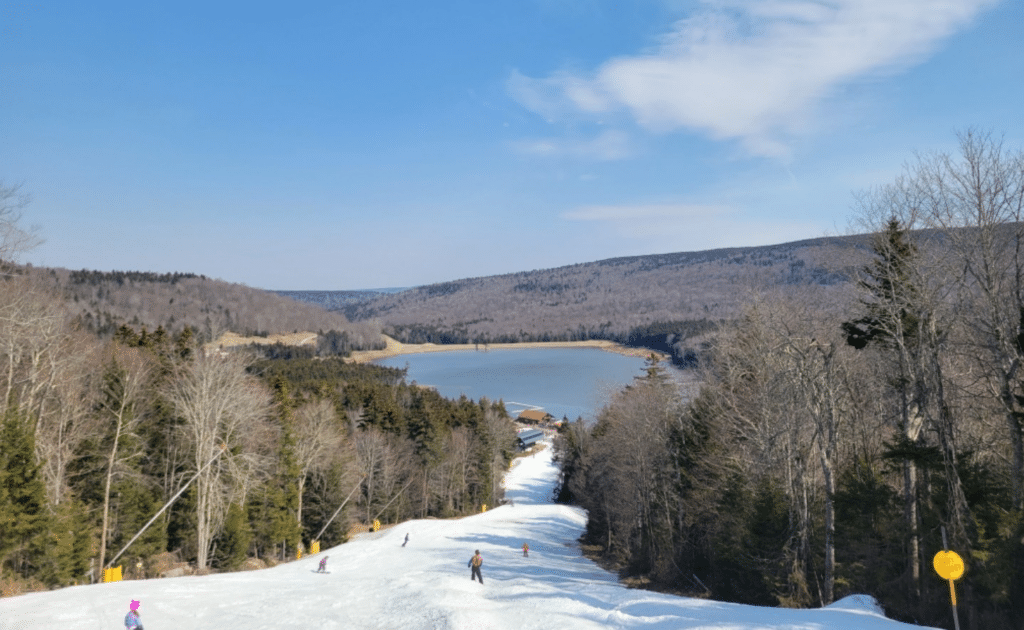 Photos and story by Joe Stevens

For the last few seasons it has been a family tradition to be on the slopes somewhere in West Virginia for our son’s birthday.  The last two years we were in Canaan Valley, this year it was Snowshoe Mountain. Traditions are fun and when it involves skiing and snowboarding, well that’s the best of both worlds.

As you learned last week (of course only if you read the column) I stepped into a pair of skis for the first time in 25 years.  This week it was back to my trusty Burton snowboard.  Not saying I felt guilty leaving the board in the garage for first time in over two decades, but you get the idea, I hope at least.

Jumping back a few years, during my 16 seasons at Snowshoe Mountain, I used a Junior Ski Patroller by the name of Preston Cline to take visiting media on a mountain tour. That is an important task, and I had all the faith in the world that Preston could handle the task.

Fast forward today, Preston is now the Director of Risk and Business Operations for Snowshoe Mountain. The kid has a lot on his plate in making Snowshoe Mountain tick every day of the year.

A couple of weeks ago when we were catching up on the season, Preston pulled out the guilty card and asked me where I have been all season? The answer I could come up with was the, “we had been busy and were trying to make it his way.”  Needless to say, that’s another reason I enjoy family traditions.

Catching up with Preston (far right in the group lift chair selfie) meant that we would have the opportunity to open up with patrol, a half an hour prior to the official 9 am rope drop, officially opening the slopes for the day.  Dropping over Gandy on the basin side of Snowshoe Mountain on a blue bird day (see other pics) is very special indeed.

Another thing that is good about making a few turns with Preston is being able to catch up face to face with a leader in the ski industry. The young official has the amount of insight into what’s going on you would expect from someone who grew up in ski bindings.  The kid (he will always be a kid to this old guy) knows his stuff.

On one of the lift rides back up to the top, I asked him what the biggest challenge has been this season as things begin to wind down. I really thought he was going to say getting enough employees to operate at full capacity on any given busy day.  To my surprise, his answer to me was the season’s overall weather, which he says has just been so unpredictable.

While the year started off with excellent snowmaking temperatures in November through Mid-December, he said when Mother Nature took that thawing break over the Christmas holiday period, it was really tough to rebound from the amount of snow that was lost due to the spring like conditions at a time the snowguns should’ve been going at full force.

Instead of adding on to the base and adding more terrain daily marked as open on the snow report, the groomers were having to push snow at a rate that usually doesn’t happen at that time of the year.  He admits he feels they really have not completely come all the way back from that dreadful mild period.

Let’s be fair though, for the holidays, Snowshoe’s snowmakers were able to open Cupp Run from top to bottom, 1500 vertical feet during a challenging snowmaking period.  So, you can see somebody knew what the heck they were doing with making real manmade snow.

Snowshoe Mountain plans to stay open through the end of this month, while Timberline has announced they are operating through at least March 20.  For the other two alpine areas, Winterplace and Canaan Valley are looking to call it a season, Sunday, March 13. Which means if you haven’t taken those turns yet this year, time is running short for you.

Mother Nature looks like she is going to throw all the resorts a couple inside curve balls, with a good shot of rain over the next week or with an outside chance of hopefully snow.  I am here to say that real manmade snow can handle her onslaught, but when you toss in above average temperatures for this time of year, slope coverage dwindles quickly.  To be honest, if the majority of the resorts in the region are operating after this coming weekend, I am going be pleasantly surprised.

Getting back to my chair lift conversation with Preston, one thing that he did say was taking everything into consideration, this season has been a pretty good year.  The January to mid-February period had everyone rocking in the region and he said that kept employees energized as the season wore on at a time when their enthusiasm has been known to drop off.

Just think this time last year despite having to put up with COVID restrictions, a number of resorts were reporting record visitation seasons.  Even though this season has been strong for the most part, I don’t think you are going to hear the same type of busting at the brim stories.  Preston said that COVID was again a factor this year, but more in the terms of keeping employees safe and not sick. Since it was tough, just to find enough employees to operate efficiently, when a handful or more were out sick, it only magnified the problem.

So, while we thank Mother Nature when she delivers with cold temperatures and natural snowfall, when she does what she has done this season, it creates sleepless nights for all the resort operators.