More Snow and then a Chamber of Commerce-like Weekend Ahead!

Over the last 48 hours we’ve seen snow fall with the first wave of significant snowfall over the western North Carolina mountains and then as the northwest flow snows kicked in we saw the more significant snows across the upper tier of ski resorts (Wisp, Canaan, Snowshoe, Winterplace, etc.)

6-8" of snow fell on Tuesday into Wednesday AM across Cataloochee Ski Area in Maggie Valley and into Beech, Sugar, Appalachian and Wolf Ridge – while only an inch or two fell into West Virginia. Another 1-4" of snow fell in the NC Mountains on Wednesday while a bit more snow made its way further north.

Within the last 48 hours the snowfall totals kind of evened out and 6-9" or so of snow has dropped on all of the ski areas within the region – with the crazy exception of the Virginia ski areas. Bryce, Massanutten and The Homestead all saw only an inch or so of snow in the last 48 hours. Wintergreen reported 4" on new snow on Wednesday morning and another TRACE of snow this AM.

We’ll see a little more snow today and through Friday mid day further north, but for the most part this most recent blast of snow seems to be over and now we’re looking at a stretch of at least a week ahead of moderating temperatures. We’ll begin talking more about that NEXT WEEK.

For now we want to talk about this weekend. This weekend will be yet another Chamber of Commerce-like weekend with temps in the 30s and 40s for highs and lows in the teens and 20s – with BLUE SKIES BABY!

That bodes well for yet another great skier visit weekend for the resorts. Perfect ski and snowboarding conditions await you no matter where YOU happen to be heading this weekend.

Snowshoe Mountain Resort is playing the GREAT HOST for at least 151 fellow ski and snowboarding enthusiasts this weekend for a three day fun fest. Snowshoe’s marketing peeps are providing our messageboard members with $100 OFF any two night lodging on the mountain; a FREE Apres Ski Party Saturday night with a DJ and free eats; and all who attend the FREE PARTY are getting a FREE LIFT PASS!

All YOU have to do to take part in this great deal is join our messageboard (it’s free as well) and show up!

As one of our messageboard members pointed out this morning, there appears to be 30+ new members who are coming on just to take advantage of the offer and that’s fine with us! The more the merrier. We hope you guys will hop over to the messageboard and become involved with one of the most interactive online "ski clubs" around. Members communicate daily on the goings-on around the region and at last count we now have 1770 members with 632 of those posting messages actively (which means in the last ten days). That’s very cool!

COME JOIN US for a great weekend of fun. Several of us are going to meet up in the Village of Snowshoe around 5:20pm on Friday for a LIVE TELEVISION BROADCAST to millions of viewers via NEWSCHANNEL 36 (WCNC) in Charlotte, North Carolina as fellow snow loving Meteorologist Brad Panvich will be talking to us about the Summit, the snowfall and more.  (By the way Brad would be at Snowshoe if he could, however he and wife Tammy are expecting their first child! All of us wish you and Tammy the best Brad and we’ll get you up at Snowshoe with us next season!)

Then several of us are going snowmobiling Friday night – others are planning a meet up to make some turns at Silvercreek. I’ve heard rumors that there could be some adult beverages shared at Misty’s.

Saturday morning we’re hoping as many as possible will meet up at 8:45am at the top of Ballhooter for a big photo shoot and then we’ll be making some turns on what should be an awesome day of riding the snow!

Saturday night we’ll be enjoying a FREE PARTY hosted by Snowshoe Mountain with music, fun and a lot of giveaways. We’ll be giving away a bunch of SkiSoutheast-wear and a $700 set of skis and some other goodies.

…and Snowshoe is giving all 151+ Summit attendees a FREE SUNDAY LIFT TICKET! 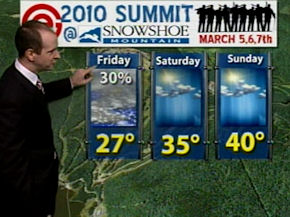 No matter where you’re headed, the roads will be in awesome shape with the timing of this latest snowfall. With the moderating temps conditions will be awesome.

There are a few weeks left in what has been a spectacular ski and snowboarding season and hopefully you guys have made it out on the slopes as much as possible. If not – do it this weekend!

We’re on day 98 and there are 39 more days of opportunities to enjoy the snow for the 2009-2010 ski and snowboarding season!

That’s it for today. Go enjoy the snow! Check out the Snow Report at Southeast Snow Report  and please send us your favorite ski photos, ski videos, trip reports and comments to [email protected]

Previous Post
Perfect Weather and EPIC CONDITIONS for the SkiSoutheast Summit at SNOWSHOE THIS WEEKEND!!
Next Post
Here’s a Preview of the Epic Conditions at Snowshoe from this Past Weekend – This Weekend will be EVEN BETTER! – Photo provided by snowboardwfaith.