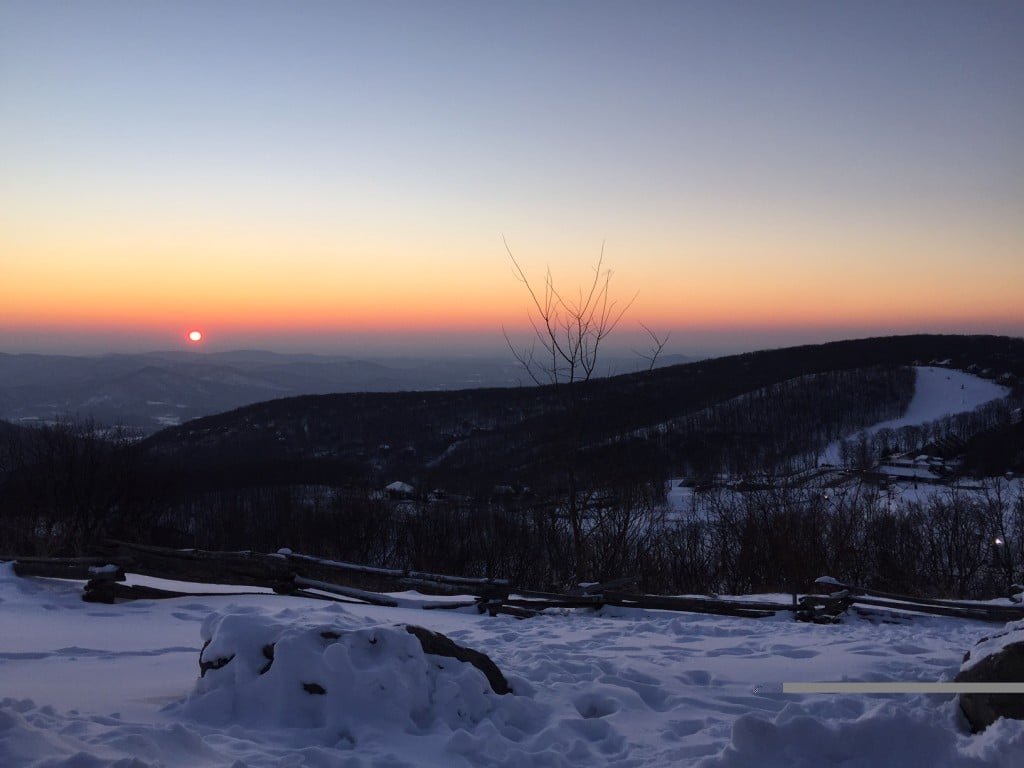 Well, it’s another brutally cold morning across the entire region.  It’s not only cold in the mountains either.  We got down into the single digits here in Charlotte/Davidson as well and I’m sure most of you who are reading this are freezing your butts off too.  Temperatures at the resorts are pretty similar to yesterday morning.  Some are a few degrees colder, some a few warmer.  When it’s in the negatives though a few degrees here and there doesn’t really make that much of a difference.

I told my co-workers, who are in Boone, yesterday that they should go outside and throw some hot water into the air.  Here’s the result.

Here are a few of the HIGH temperatures yesterday.  Yeah, I said high.

Yikes.  The webcams at the resorts showed noticeably less crowded slopes.  I wonder why?  That high temperature in Canaan Valley broke a 17 year old record yesterday.

Luckily, things will warm up some today.  Warm up is all relative.  Temperatures are going to be 15-20 degrees warmer than yesterday, but that’s still rather chilly.

Massanutten had this comment on their snow report this morning:

Cold start, sunny with highs reaching an almost balmy 15 at the base.

I thought that was kind of funny.  Fifteen does sound kind of balmy when you’re been in the lower single digits and negatives for the past few days.  The snow should be amazing today.  It’s been so cold this week that any snow that has fallen has been of high quality.  I mentioned this on Tuesday when I was talking about the blower powder.  Here’s an excerpt from Wintergreen’s blog this morning…

The snow surface is perfect, making that squeaky dry sound under your boots.

Days like this are a treat for us in the Southeast.  It’s not too often that the GROOMERS are nice and chalky to where you can spray some snow.  We don’t get that too often here but today is going to be one of those days.

The weekend ahead looks interesting.  Another system is going to track across the region and bring some more snow to the region.  Things have changed since yesterday though.  I was hoping the NC resorts would get several inches but it looks like they’ll only get a few inches tonight and tomorrow before it changes over to a wintry mix then rain.  I think I’m headed to Beech in the morning to partake in the festivities going on up there (80’s Day, Banked Slalom, Brackish Demo Day), so I’m hoping the morning will provide some decent turns.

The Virginia resorts look like they’ll get their second good snowfall of the week.  The forecast for them is generally 3-7 inches right now.  Awesome!

As usual, West Virginia looks to be the big winner.  The forecast for Snowshoe and Winterplace is 5-9 inches tomorrow.  Winterplace is having a heck of a week.  If that forecast holds true, that would put them over 2 feet for the week.  Sheesh.  All of that snow at Snowshoe will make things even better for our Ski Southeast Summit up there next weekend, so that is great.

Here’s the current NWS snowfall forecast map for the next couple of days.

An interesting question was asked on the messageboard recently.  Is snowmaking over for most resorts?  You may have noticed that while it has been really, really cold over the last few weeks there really hasn’t been a lot of snowmaking going on.  To my recollection, only Cataloochee and Ober Gatlinburg have made snow this week.  When I was at Beech on Monday I noticed that a lot of the water hoses and snow guns had been disconnected and taken off the mountain.

Looking at the calendar, we are into late February now and we’re past the President’s Day holiday weekend.  That is always the signal for the end of the busiest time (AKA most money making time) of the season.  A lot of resorts close up in the middle of March, not for a lack of snow but due to a lack of visitor traffic.  The middle of March is now only 3 weeks away!  That’s crazy.

So yeah, snowmaking is over for the most part unfortunately.  There will be some who make snow here and there though, such as App Ski Mountain as they are going to be open into April.  It’s hard to be too bummed about that right now though when it’s bitterly cold and snow is in the forecast for the weekend and next week.  Unless March is an absolute scorcher, we should have plenty of snow to last well into March without needing any manmade snow.

That’s it for me this week.  Next week should be another fun one with more cold and snow and the Ski Southeast Summit is only a week away now!  Woohoo!  Everyone enjoy the weekend and stay warm!