More Cold and Snow to Talk About!

Oh yeah! This week just keeps getting better and better! I guess I’m in a great mood this morning because it actually feels like winter. The drive into work in the mornings is much better when there is snow on the ground everywhere. I can tell my mood is MUCH improved when I write these morning reports and the weather is like it is right now. 2012 is starting off pretty dang good.

This is the second morning in a row where I can tell you that a number of ski areas in the region saw some natural snowfall over the past 24 hours. Here is that list:

As you can see, it was limited to the West Virginia, Maryland, and northern NC ski areas. Snowshoe, Canaan, Timberline, and Wisp are easily the biggest winners with this system. Each of those areas has seen over a foot of snow in the past few days. Ed Schneider from up at Snowshoe posted a video from there yesterday, showing that there were powder conditions to be had! You can view it by clicking HERE. 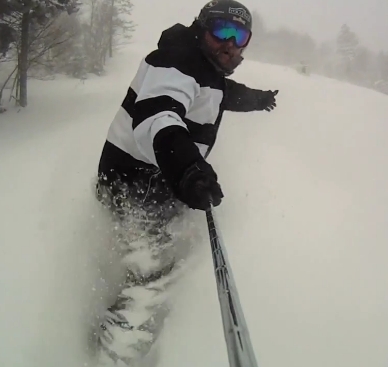 <<<< Ed Schneider showing that there a little bit of powder to be had at Snowshoe yesterday.  The same can probably be said of today!

Regardless of snowfall totals, INTENSE snowmaking has been taking place at all of the resorts as the past few days have been downright COLD. Temperatures yesterday were ridiculously chilly and the wind wasn’t helping either. Several ski areas saw wind chill numbers remain in the negatives throughout the day yesterday. Just looking at the webcams gave me the chills as it looked fairly miserable out there. Our weather stations at Sugar Mountain and Snowshoe were showing some bone chilling numbers. The highs at each location were 6.1 and 8.5 degrees, respectively. I decided to hold off on riding last night because of this. I went to the gym instead to work off some of the holiday weight I put on. I swear I think I added 10 pounds over the break!

I’ll definitely be headed to either Beech or App tonight though as temperatures won’t be nearly as cold today. Everyone in the region will see highs today generally 15-20 degrees warmer than yesterday. There will also be a lot more sunshine, at least for the areas here in NC.  Looks like cloud cover is going to stick around everywhere else.  We’re seeing some inversions here in NC this morning as temps atop Beech Mountain are a good 10-15 degrees warmer than down in Boone. It’s still cold though!

While temps will warm up today, they are still going to be cold enough for snowmaking to continue through tomorrow. Highs will range from the mid 20’s to the low 30’s at the ski areas across the region. Some resorts might see a flurry or two overnight as a front moves through, but nothing of significance.

This week is going to turn out to be quite the roller coaster in terms of high temperatures. Here’s an example. As I already mentioned, the high temperature at Sugar Mountain yesterday was 6 degrees. The high on Sunday was 54. The forecasted highs for Friday are in the mid to upper 40’s. Talk about a swing in temps, geez! That’s winter weather in the North Carolina mountains for you though. 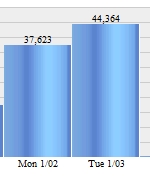 Mike alluded to this yesterday when he posted an announcement on the front page, but you guys must have been yearning to see some snow! High Country Web Cams visitation over the past few days has exploded with the snowfall across the region. Our video server yesterday was running a little slow due to the huge influx of visitors on the site. Over the past two days we have seen right at 82,000 unique visitors to High Country Web Cams alone. Over 44,000 of those came yesterday. I thought that number was pretty awesome until Mike told me our record for one day is 78,000. Whoa! The last few days have still been impressive nonetheless.

I’ll be tweaking some things on the video server today to try and speed it up, so don’t panic if things go down for an instant! Mike has even mentioned possibly upgrading to a new server sometime soon that is solely dedicated to the webcams as we plan on adding a bunch in the upcoming year. People love these new cams!

We even set a record over on the messageboard for most visitors at once. Our previous high was around 260. Yesterday morning we saw 327 people on there at once. Good stuff!

Alright, now on to the ski areas. A few base depths have shot up this morning (legit or not) and trail counts are on the rise as well. Look for both of those stats to continue to increase over the next few days.

App – They are open on 7 trails today and tonight with a base depth of 40-60”. Two new inches of snow over the past 24 hours! That base has drastically increased over the past 48 hours and I actually believe it as their snowmaking is ridiculous out there. The cam was showing almost blizzard like conditions the past few days! Ice skating is open as well. Fresh Friday #2 is this week as well as the K2 Ollie contest. 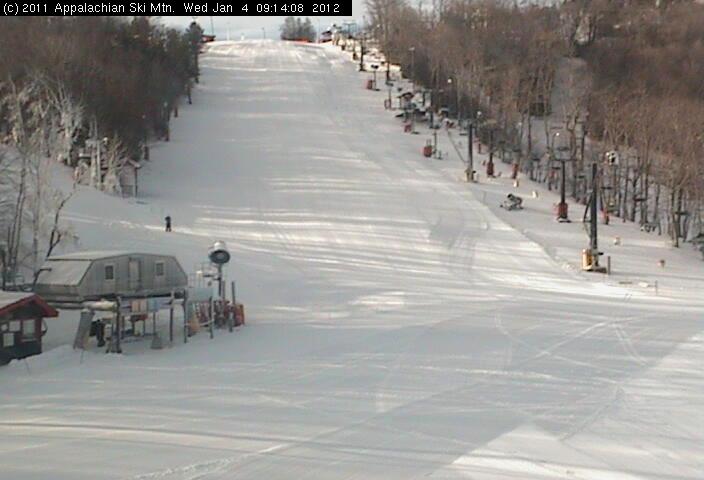 <<<< The conditions and grooming at App look pretty amazing this morning!

Beech – Open today and tonight on 5 trails with a 18-38” base. They too have seen 2 inches of new snow over the past 24 hours! They are blasting the slopes with snow in preparation for Winterfest this weekend. I’ve heard they are hoping to have Powderbowl open this weekend which would be awesome.

Cataloochee – Cat is open to the top today and tonight with 15 trails. That’s almost the entire mountain! Their snowmaking has been impressive this year.

Sugar – Open today and tonight on 11 trails today with 5 lifts operating. They have seen a dusting of snow over the past 24 hours.

Wolf Ridge – They are re-open again today after having water issues in the lodge yesterday. They will be skiing and riding today and tonight on 5 trails with a 24-32 inch base.

Ober Gatlinburg – Open today on 4 trails with a 10-16 inch base. Tubing is open as well. It’s good to see them open for the year!

Massanutten – They resume normal hours today and have increased their open trail count to 5 for today. They are also offering 6 lanes of tubing. I love watching snowmaking out there on the webcam.

Bryce Resort – They will be skiing and riding today and tonight on 7 trails. That’s up from 4 yesterday! They are tubing as well. Conditions look great out there on the webcam!

Wintergreen – Open for day and night sessions on 6 trails. Tubing re-opens on Friday.

Winterplace – They have seen an additional inch of snow over the past 24 hours and will be operating on 14 trails today with a 16-34 inch base. They are open to the top of the mountain! Warren, if you are reading this, get that weather station up and running!

Snowshoe – Open today and tonight on 33 trails, most in the region. They’ve seen 4 inches of snow in the past 24 hours, and over a foot in the past 3 days! Powder and packed powder conditions exist today. They have a 10-20 inch base, which is probably the most honest of any resort in the region as well.

Timberline – Open on 12 trails today. Like Canaan, they’ve seen over a foot of new snow in the past few days. They are also open to the top!

Wisp – They have seen 4 inches of new snow in the past 24 hours, and 16 inches in the past 48! The open trail count has increased to 9 today, and I suspect that will increase again tomorrow. They are open from 9am -9pm today and lift tickets for that entire period are only $29. That’s a great deal! Ice skating and tubing are also open.

Previous Post
Parkview Lodge & Cabins Offers Lodging as Low as $69 a night!
Next Post
NO BETTER TIME THAN THE PRESENT!