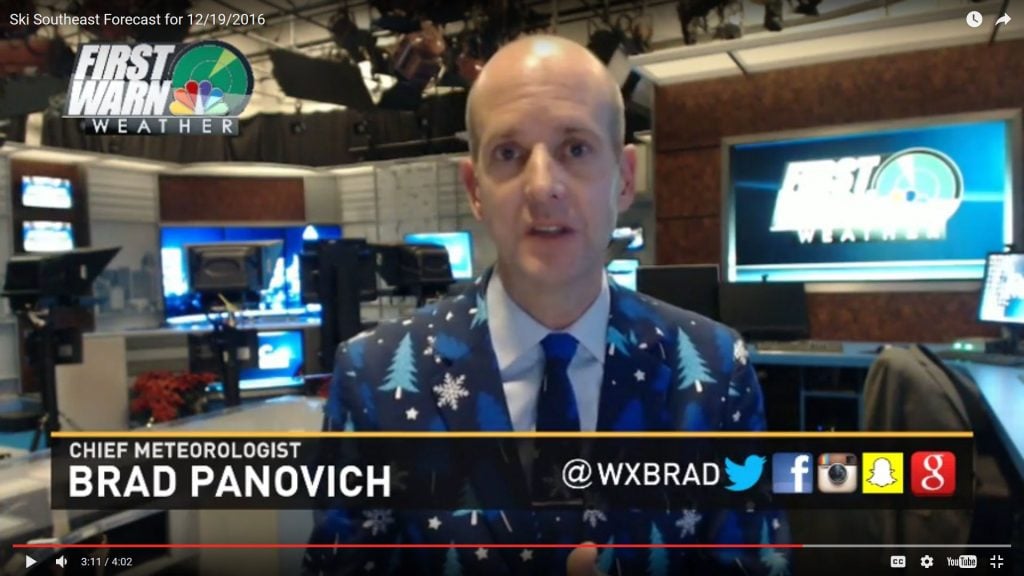 We’ve got a lot to cover this morning, but since we’re talking ‘seasonal’, we’ll have to begin this seasonal ‘morning blog’ with the latest Skier’s Forecast video provided by a VERY SEASONAL LOOKING Brad Panovich. Brad donned his best snow jacket and tie to the delight of numerous people who have already emailed us this morning.

If you didn’t watch the video above – the main message is that our weather will be cold enough to provide SNOWMAKING for the ski areas for about 8-10 hours per evening from tonight through Wednesday which will continue to allow resorts to build base and open more terrain.

Brad alludes to things kind of “milding up” as we get to this weekend and even in the midst of the Christmas to New Year week – but you guys need to keep everything in proper perspective. In this case “milding up” doesn’t mean the kind of ‘blow torch’ milding up that we saw last December when we experienced 11 days of temps in excess of 70° pre-Christmas. 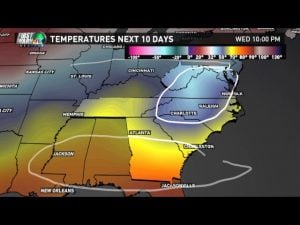 We’re getting more than a few emailers lately requesting specific prognostications for places like Wolf Ridge, Cataloochee, Ober and even Bryce Resort – where those people have been witnessing slightly milder temps.

That scenario was in place again THIS MORNING as we saw lows in the TEENS and low 20s at Wisp Resort, all of the West Virginia and Virginia ski areas. However, Beech, Sugar, Cataloochee and Wolf were all hovering around 30°. The colder air has just been bottled up just to the north of the North Carolina and Tennessee mountains.

However, all of the ski areas made snow last night (expect for Appalachian for some reason even though things appeared cold enough to do so this morning). Sapphire Valley was NOT cold enough.

This pattern looks to be continuing through the period between now and January 1st – so expect good conditions at YOUR FAVORITE SKI RESORT.

What About More Slopes???

That IS one of the other questions that we’re getting all day, every day. The ANSWER? Sure, we’ll see more slopes opening.

This morning perhaps provides a clearer picture of how great our resort snowmaking crews are. Sunday was a miserable, wet day across the region. However, last night most of the ski areas were able to make snow. Even WITH the yucky day on Sunday, we now see more slopes open at several ski areas for your Monday enjoyment.

With 5-8 more snowmaking nights ahead of us between now and January 1st – we will see more terrain opening up. The good news is that we are not seeing any high temps above the 40s and there isn’t much in the way of the dreaded “rain word” in the forecast between now and then. In fact, with a little luck – we could see a bit of snow chances just after Christmas.

Here’s a good video produced by Winterplace, feature Tom Wagner that kind of shows what we’re saying in terms of how things look RIGHT NOW.

Cataloochee Ski Area – Tammy Brown sent me a pretty cool email that illustrates how nutty the weather has been. She wrote, “Good Morning! Above the clouds we are making snow!!!”

Wolf Ridge Resort didn’t make snow but upped their base. That’s a nice trick. Maybe they made snow but didn’t include it in their own report. One or the other is wrong.

“I remember you guys mentioning something about it last season but it seems odd that Over Gatlinburg would use a stock video footage from Shutterstock of a ski area not theirs for their front page. Kind of misleading to me. I’m a messageboard user too and I know some people have mentioned it their too. – Tomas Hartnett, Atlanta, GA.”

Well Tomas – first it is “OBER” not Over. Common mistake. Second, man I hate it when we have to break out the ‘grammar police’ when we’re so bad about it as well – but it’s “THERE” not “their”. Third, we DID actually bring that up last season, but sliding on snow is sliding on snow and perhaps they just feel that the image is acceptable. It’s easy enough to do a video on their slopes and put it on their frontpage so we’re not certain why they’d use a clip from a resort not named Ober. However, I know that their peeps DO read these FirsTrax posts and I’ll bet someone will chime in with a great response. Fourth, ‘good on you’ for being willing to post your name. Many such complaints come anonymously and hence we don’t share them.

Massanutten Resort – The snowmaking team was back at it last night and will continue making snow today. Pacesetter is next on the list and should be open soon.

It was 14° at Snowshoe and 35° at Beech and Sugar this morning. VERY UNUSUAL temperature difference.

It was very nice to hear from Tracy Edmonds Herz from Timberline Resort this morning. They are opening this Friday and looking forward to a wonderful Christmas week and beyond. Timberline Resort fans will be happy to know that we are taking steps to push their LIVE CAMERA FEED to even greater resolutions. (Fingers crossed on that…)