MLK Weekend is THIS WEEKEND! The Weather Forecast and More is Discussed in the Second Update today!

The weather has been the obvious BIG STORY of the season to date. We’re actually UNDER the seasonal snowfall numbers that we had just one year ago when we were skiing on Halloween, however I think that everyone is in 100% agreement that we’ve never seen the amount of snow and base depths/conditions that we’re experiencing right now on any previous January 11th. As we reported in this morning’s update, some ski areas in the region have seen more than three to four FEET of snow since January 1st and those natural snows have combined with near zero natural temps for a prolonged period of time to create some awesome ski and snowboarding conditions no matter where you choose to head for your MLK Weekend Holiday which takes place THIS WEEKEND.

The MLK Holiday Weekend, as far as the ski resorts go, is from this Friday, January 15th through Monday, January 18th. In terms of importance to the commerce of the ski industry in this region it is second only to the Christmas to New Years period. Since this is a long weekend for a lot of people, skiers and snowboarders from all across the region flock to the resorts in huge numbers.

THIS particular MLK weekend looks to be setting up to be a phenomenal one in terms of open terrain and surface conditions. Nearly all of the ski areas are fully open and most resorts won’t even be making snow during ski and snowboarding sessions.

THE WEATHER FOR THIS WEEK AND WEEKEND???!!!

Several people have emailed us with a look ahead to this coming weekend and the hint that we might see something less than fully developed snow coming our way. (For you newbies to this site, underdeveloped snow is rain or freezing rain.)

Off mountain weather gurus are already talking about a mild week ahead and it will certainly be MILDER but highs and lows forecasted for this week are STILL BELOW NORMAL FOR THIS TIME OF THE YEAR. Brad Panovich has already posted his latest Skier’s Forecast Video for the next few days and you can check it out by clicking here> Southeast and Mid Atlantic Skier’s Forecast.

The next two weeks will stay below normal temps.

The NC Mountains should see a little snow (1-3″) tonight and into Tuesday but then sunny skies Tuesday through Friday with highs in the 20s on Tuesday and then mid 40s or milder on Wednesday, Thursday and Friday. Lows through this week will be in the teens Monday, Tuesday and Wednesday night (more snowmaking!) amd then low 20s Thursday and Friday nights. At this point we are looking at some chances of a wintry mix late Saturday and into Sunday. That could change as Brad says that the COLDER AIR that we’ve seen will return AGAIN after a few “milder-than-we’ve-seen-lately” days.

The mountain areas into WV and Maryland will see a slightly colder forecast with a bit more snow (3-5″) Monday through Tuesday night. Highs will then be in the 30s for Wednesday, Thursday and Friday. The weekend looks like a snowy one for the WV and Maryland ski areas for the MLK weekend with highs in the upper 20s (keeping that snow fully developed!)

Brad’s video tends to hint at the possibility of an icy start to the weekend across the board for the entire ski forecast area of coverage, but behind that it gets noticeably COLDER and we’ll see a return to frigid and snowy conditions. So Brad’s forecasting a great second half of January and a finish to the 2009-2010 ski season that we won’t soon forget. (That’s exciting!)

I know that you guys who are heading up to the mountains this weekend will pay close attention to the weather as we move closer to the weekend. Brad will update us again Tuesday night and we’ll share that with you guys Wednesday morning.

Beech Mountain’s Winterfest was a COLD ONE!!! 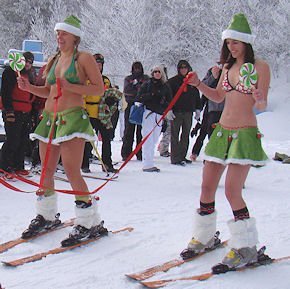 One of our team, Chase Hendley braved the near zero degree temps to take a few photos. We have no results on the cardboard box derby, the winners of the rail jam or any of the other activities. HOWEVER, we have several photos from the bathing beauty contest! These two ladies didn’t win but we got their pic as well!

The winners are pictured on the front of the site – thanks to Chase’s “hard work”.

As we understand it, the contest took place over about five seconds to ski down, go into the View Haus and pick winners! Just kidding, but it was cold and it didn’t last long enough for the males in attendance!

Chase posted this image as well as the photo of the day on the front of the site! (Chase said he loved his job on Saturday!)

Speaking of loving your job… (how’d you guys like that segway?)

LOVE WHAT YOU DO AND DO WHAT YOU LOVE!

I was speaking with Snowshoe’s Senior Management team during a nearly one-hour Q&A session and I asked each staffer what they loved most about their jobs and each person answered the question in a way that spoke to their true passion of working within the industry. However Snowshoe’s 36 year veteran, Ed Galford provided a very cool answer. He said, “The best thing about my job is that I get to go in the woods every day and everyday is different.”

Ed told me that he starts everyday on a snowmobile touring all of the slopes and trails at Snowshoe. I’m sure there’s a lot of you guys out there that want to know where to apply for that job!

As mentioned, I did a lengthy interview with the management staff of Snowshoe and we’ll be providing that (hopefully) insightful video and story within a day or two. We think it will give you a good insider’s view of a day in the life of the people that make a ski resort run efficiently.

Stay tuned for that interview.

DID ANYONE ELSE SEE ALL THOSE MIRRORS???

On Sunday morning I was fortunate to be able to make some first tracks for about thirty minutes before anyone other than ski patrollers hit the mountain. Sunday AM was a killer, blue sky day – the first day that provided not a cloud in the sky in a couple of weeks. The temperature was ZERO degrees and almost no wind was blowing. It was cold to be certain but a brilliant day to be on a mountain.

After a few runs down the mountain I skied over to Cupp Run for a last run or two before heading back to Banner Elk. While riding up the Cupp Run lift one of the most beautiful scenes that I think I’ve ever seen on the snow revealed itself to me in the form of tens of millions of tiny mirrors on the snow below my chairlift ride to the top of the mountain. (No I wasn’t smoking anything…)

I think the near zero degree temps had created a hard packed snow surface that when combined with the brilliant sunshine created an effect that was simply gorgeous. It is my wish that each of you gets to see that scene at some point. As much as I’ve always been a snow lover…I fell “in love” all over again.

FYI, Cupp was groomed to sheer profection. Upper Cupp was the most fun I’ve ever had on it. After skiing so much POWDER conditions for weeks, Snowshoe had really done a corduroy job on the entire run and there were no moguls, and nothing but sheer, weightlessness invoking drops and fall line speed skiing from top to bottom. Two runs with those conditions had my legs FRYING and begging me to stop, but it was crazy good nonetheless.

I had seen Snowshoe’s VP and Mountain Ops guy, Ed Galford in the Boathouse at the bottom of Ballhooter around 9am and he came up and said, “I’m not sticking around for breakfast. We groomed Upper and Lower Shays.”

When I didn’t respond appropriately he repeated (this time like a kid in a candy store), “Shays. GROOMED. I going. Bye!”

It was cool to see a 36 year Snowshoe vet excited to hit the mountain.

I had planned on going down Lower Shays to witness that for myself, but I don’t think my legs would allow it. Having skied Lower Shays in some hardcore Mogul setups, I think I did myself a disservice not hitting it groomed for speed. Hopefully I’ll get another chance.

MAN have I got and received a ton of really nice images and videos to post over this past weekend. I didn’t even get to check my own email today but I promise to get more of those posted for you on Tuesday and Wednesday. Stay tuned. Check back. Whatever!

Check out the Snow Report at https://www.skisoutheast.com/skireports.php  and please send us your favorite ski photos, ski videos, trip reports and comments to [email protected]

Previous Post
These Two Young Ladies Won the Beech Mountain Resort Bathing Beauty Contest! The fact that they were holding a SkiSoutheast sticker had no influence!
Next Post
1/11/10 Beech Mountain