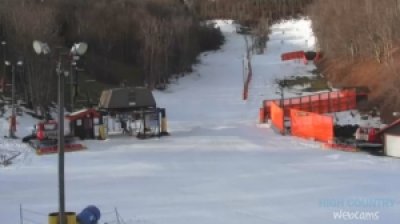 Another mild day appears to be ahead of us today. I hate saying that. This job is way more fun when there is cold and snow to talk about. My buddy went to Cataloochee yesterday and said it didn’t feel right to be leaving the mountain in December wearing shorts and a t-shirt. What a difference a year can make.

Over the next 48 hours just about every ski area will see some underdeveloped snow. On that note, I’ve been thinking of something. Mike likes to use that term, underdeveloped snow, to describe rain. I was thinking last night that maybe it should be called overdeveloped. Here’s why I’m thinking that. Rain starts out as either ice crystals or snow in a cloud. It doesn’t become rain until it falls through a layer of warm air and melts. So technically, the snow developed into rain, hence over-developed. I’ll have to mention that to him and see what he thinks. Also, that is probably the last time all season you’ll see the term rain in these morning articles. We like to stay away from mentioning that around here.

Anyways, the next 24-48 hours look to be kind of wet around the region. The West Virginia ski areas might see a changeover to snow at the back end of this system, but in general right now it looks like this is mainly an over/underdeveloped snow event. The good news is that the weekend will provide snowmaking temperatures. I think I talked about this yesterday. We should be able to see almost everyone make snow on Saturday and Sunday nights. The northern West Virginia ski areas will be able to lay down some manmade snow on Friday night as well, and possibly even around the clock through the weekend. So it seems as if we’re going to have another event where we see under/overdeveloped snow first, and then a short lived cold pool of air behind it. This is probably the 5th time this has happened this year.

Even better news is that the forecast for January looks a lot more promising than what Mother Nature has provided us with so far. A few weather models are showing a warming of the stratosphere and subsequent weakening of the polar vortex. Basically, this means colder temperatures for us. Cross your fingers!

I’ll quickly mention that our new Appalachian Ski Mountain cam is now up and running. We’re having some network issues right now with it, so it’s not in HD just yet and occasionally it does have a glitch or two. However, it’s still pretty awesome and you get a pretty unique view of the mountain. I can’t wait to see what it will look like when App gets those snow guns going! 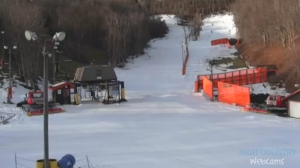 <<< Our new App cam is pretty awesome!  You can see the ENTIRE mountain as it will pan around and show you a 180 degree view, making every slope visible.

Alright well I have some other things to do so I guess I’m going to wrap things up here. Check out the Ski Report page for a complete list of details and info about the ski areas. I’m not going to go into detail about them today because nothing has really changed over the past few days. App, Beech, Cat, Sugar, Massanutten, and Snowshoe all remain open though, so there are plenty of places to get some turns in!  Tomorrow, we’ll talk about additional resort openings and happenings going on this weekend.

Previous Post
Conditions at Snowshoe Yesterday Looked Fun!
Next Post
A Couple of Snowboarders Enjoying the Snow at Massanutten