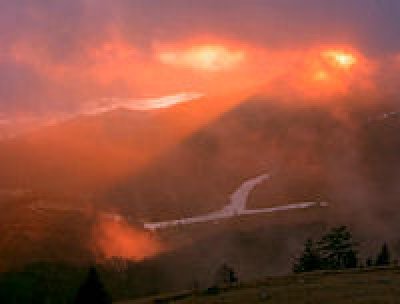 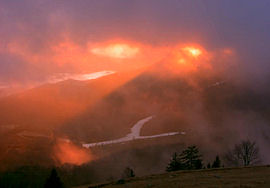 This is obviously NOT a huge news day since things are so mild right now, so let me at least share this AWESOME photo from Cataloochee's Hemphill WebCam this morning.  I've posted three camera images from a few minutes apart this morning that shows Cataloochee appearing to be "on fire". Those kind be found on the PHOTOS OF THE DAY on the front page.

IS IT MILD ENOUGH FOR YOU?

If it wasn't mild enough for you on Saturday, tick things up 4° this morning. We know that it's coming to an end, but it's nevertheless crazy to see these kinds of temps each morning.

Snowshoe was 48° this morning at 7:25am and they've dropped six trails from what was open on Saturday. That is not as much due to deteororating slopes as it is that they are operating only on the Snowshoe Basin side of the mountain and only offering the Silver Creek trails on Fridays and Saturdays. They now show 15 trails open for Sunday on a base of 12-30". 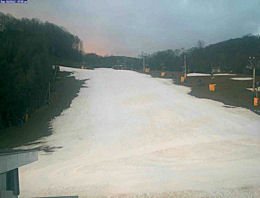 Cataloochee Ski Area  showed 49.1° this morning and they're down another trail from Saturday (two down from Friday) and now show three open trails.  You have to love and respect Cat's policy of guest satisfaction. This morning they wrote, "We continue to have great coverage and if you want to come and check it out…yes, you get a full refund after one run if you are unhappy with conditions! On Sunday, we will be skiing from midstation down on 3 slopes with the Omigosh Double Chairlift and Easy Way Chairlift operating from 8:30am until 4:30pm. Once again, guests unhappy with conditions will receive a full refund after one run. Refunds will not be given after that. Night skiing will begin on Monday, December 17. See you for skiing and riding from 8:30am- 4:30pm! 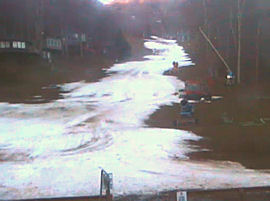 Sugar Mountain Resort is showing 45.9° at 7:40am this morning and they are down two trails from the four that were open on Saturday. They now have only TWO trails open for DAY AND NIGHT sesssions. Those are Upper and Lower Flying Mile on a base of 6-26" with thin coverage and bare spots.

Here are the three open resorts at a glance:

These are legit titles of news stories for this morning over on THE WEATHER CHANNEL.

Cold weather IS HAPPENING around the world and even here in the U.S. Just not here in the eastern United States so far. My brother from another mother, Bill Rock is COO of Northstar at Tahoe in California and they've been getting consistently good conditions from October 23rd on. With 27" of snow in October and 94" in November and the first five days of December (139" total thus far) I'd say they are getting a bit more than their fair share. FIVE of their next TEN DAY forecast calls for snow as well as snowmaking temperatures.

WHAT'S UP WITH NAMING STORMS???

Has anyone else noticed this trend from THE WEATHER CHANNEL. I've personally always thought of them as the Weather Drama, rather than "Weather Center" because they will pose a meteorologist with a foot in the surf quicker than Geraldo Rivera will dramatize a news story.

THE WEATHER CHANNEL is owned by NBC so perhaps that has something to do with it. All I know is that naming storms seems to sensationalize storms more than raise awareness of them. The National Weather Service has taken a stance actually warning people affiliated with their reporting NOT to use names of these storms in their reporting.  The AP won't be using the names.

According to THE WEATHER CHANNEL:

Attaching a name makes it much easier to follow a weather system’s progress.

A storm with a name takes on a personality all its own, which adds to awareness.

In today’s social media world, a name makes it much easier to reference in communication.

A named storm is easier to remember and refer to in the future. 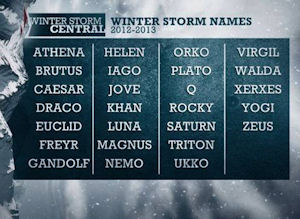 I don't think I'm a fan of naming winter storms, but here's hoping that "GANDOLF", "KHAN", "ORKO", "ROCKY", and maybe "YOGI" are all headed our way!

UNTIL SNOW COMES OUR WAY…how about some COLD (Snowmaking ops)???

Earlier in the week we shared the long range weather forecasts of Herb Stevens and Brad Panovich wherein they both talked about how temps coming in this week would usher in or open the "flood gates" of colder air for much of the remainder of December and beyond. We'll hear from Brad again on Tuesday evening and here's HOPING that he can share some insight that I'm not seeing right now – of some colder air patterns going into the all-important Holiday season and beyond.

While Snowshoe, Canaan, Timberline, Winterplace and Wisp should see some consistent cold temps (at least at night) to make snow through the next ten days, things LOOK to be a lot less "consistent" further south into Virginia, Tennessee and even here in North Carolina.

I simply took THE WEATHER CHANNEL'S content and certainly things may be a degree or two colder at times, however using that data West Virginia should be in good shape headed into the Holidays with 8 of the next 10 nights of snowmaking ops and even some natural snow mixed in. The North Carolina mountain resorts should see 5 of the next 10 nights of snowmaking. That will NO DOUBT make for much improved conditions, although two night of snowmaking this week will not generate a lot of faith on the part of the ski areas that have not opened as yet.

The Virginia and Tennessee ski areas may be waiting on THE NEXT wave of hoped for colder temps as only 2-3 of the next ten days will allow snowmaking.

HERE'S HOPING THAT THINGS GET MUCH COLDER AND SNOWIER FROM DECEMBER 18th and BEYOND.

Here's the summary for:

VA and TN MOUNTAINS (pulled from The Homestead and Massanutten, Gatlinburg):

Through December 18th, only (2-3) of the next ten days will see even CLOSE to snowmaking temps.

That's going to be it for me today. I did about one-half of my Clark Griswold impersonation on Saturday and the rest will take place today. I located by SNOWMAN and have placed him in the yard. Maybe THAT will provide the hint to "Ma Nature" and "Old Man Winter" and we can get some cold and snow in here!

Thanks for stopping by today peeps!