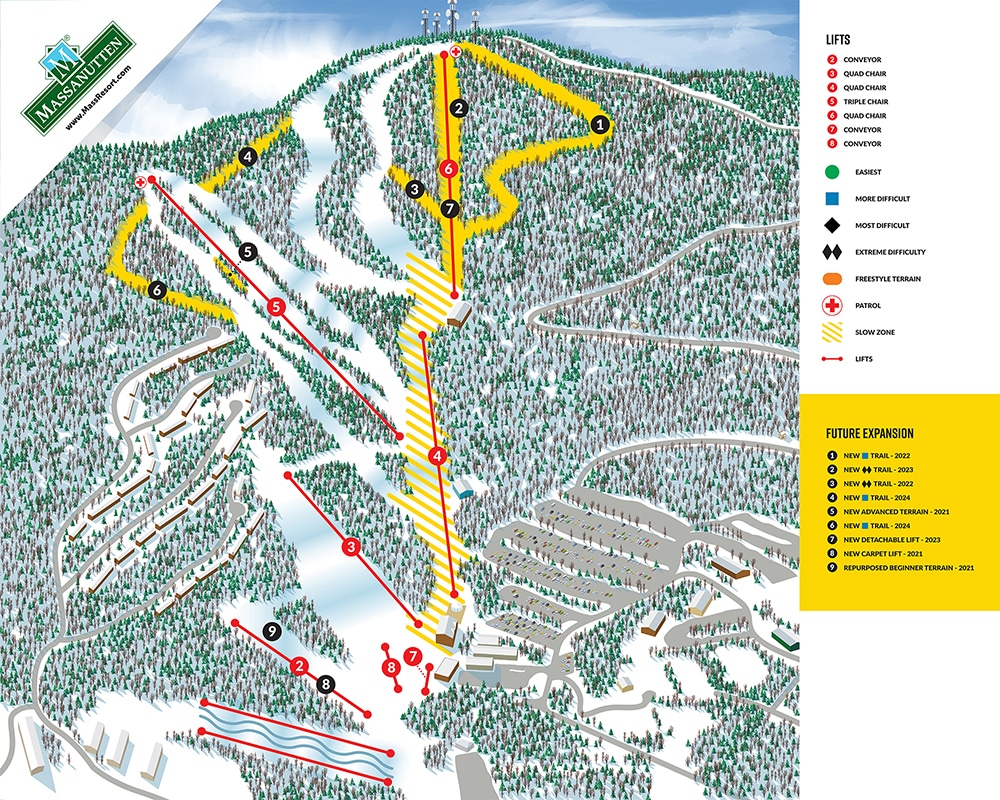 As already posted on here in recent weeks, Massanutten Resort is celebrating their 50th season this winter by expanding their beginner terrain, adding a boat load of snowmakers and snowmaking pumps, and implementing RFID gates for guests.  RFID gates are pretty snazzy and if you’ve never been to a ski area that utilizes them, you will greatly appreciate how much quicker lift lines move when they are in use.  That and you don’t have to show a ticket or pass each and every time you get on the lift.

As if those things weren’t enough, the Virginia resort has now released their plans for terrain expansion and the replacement of lift 6 with a detachable quad.  I assume that means ‘high speed’ but we’ll have to get clarification on that.  Here’s what they are saying…

We are excited to announce major terrain expansion in the coming years!

New for 21-22 season is a new conveyor lift and expanded beginner terrain and opening new “most difficult” terrain under the existing lift 5 lift line.

The 2023 season will see the installation of a new detachable quad lift to replace the existing quad lift 6 to the peak and a new double black diamond “Most Difficult” trail under the lift.

Exciting as that is, we are still not done yet with the summer of ’24 seeing two additional “More Difficult” trails, with one connecting Paradice to Mass Transit and another new trail off of lift 5.

I consider myself to be a pretty advanced snowboarder, so the addition of more black diamond trails by Lift 6 is very appealing to me.  That portion of the mountain was already really cool, as the existing two black diamond runs on that side are separated from the rest of the mountain and helps to prevent lesser skilled skiers and snowboarders from going down runs that might get them in trouble.   These plans will make it even more fun.

It’s been several years since we saw the addition of any significant terrain at a ski area in the region, so this is very exciting news!