Making Sense of the Dollars and Cents: A Report on Lift Ticket Costs

Hello skiers and riders of the Southeast.

I hope you have begun your final prep pieces for this upcoming season and are patiently waiting for the slopes to open again.  Waking up the skiing and riding beast from within is a stimulating sensation accompanied with an appetite for frosty delights that can only be satisfied with the snapping of boot buckles, the humming of spinning chairlifts, and the freedom of navigating our ways down the trails while avoiding all obstacles, amongst other things.  Gratification is but a few weeks away my friends.

With that said, have you given thought about how you will navigate financial side of this season, and in particular the lift access aspect? Keep in mind that you may need to rent gear, factor in lodging, fuel, food, etc. in which a yellow pages sized novel can be written if we include all those options.  For the sake of time, I’ll stick with one single day lift ticket as the measuring stick.

It goes without saying that if you do not get a season’s pass you will face a lot of fluctuations in costs that are affected by multiple variables such as location, point of the season, and even the time you arrive to take your turns.  Seasons passes eliminate any of that worry, and the focus then becomes a factor of how many days and nights you use that pass, because the more you ride equates to less costs per trip.  General rule of thumb is somewhere between 7 to 10 days a season will justify the pass, but only if you routinely visit the places on that pass.

However, some of us might like a little bit more variety, or perhaps we are limited in the frequency to do this, so it becomes a situation on how to get more snow for less dough. I want to help out, and I have consolidated some online research into one spot for you.  Below is a chart which displays the window ticket prices for a single adult, because they generally are charged the most throughout the industry.  I understand that you may be a youth, student, military, or senior citizen that deservingly receives a discount.  I recommend doing additional research to see where those chips fall if you are curious about where those figures stand versus what I am showing. 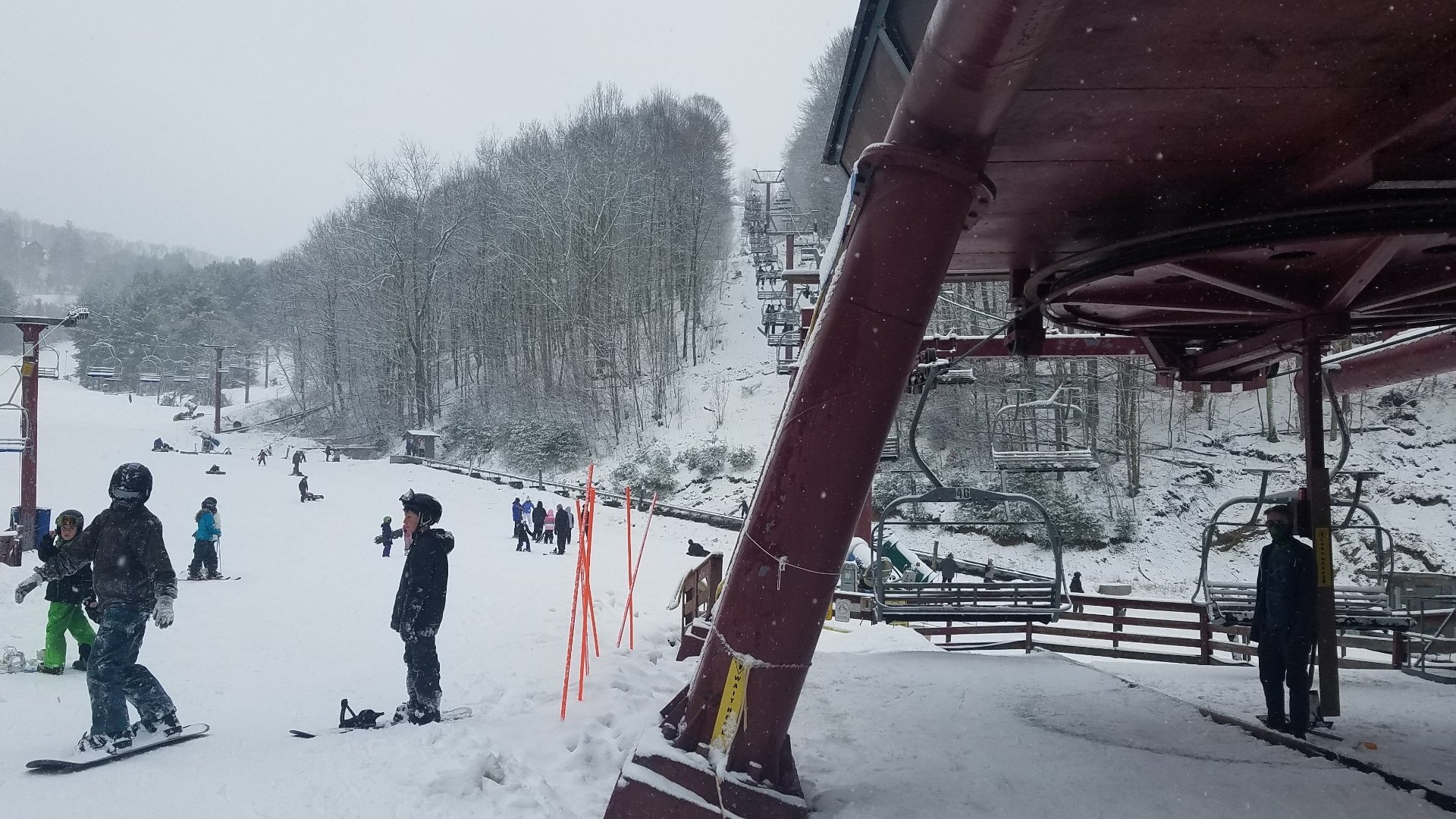 I obtained these figures from each resort’s websites, which you can find here at skisoutheast.com, but please note that some of these numbers were very easy to find on a simple chart (ex: Beech Mountain and Wintergreen) while others required extra leg work by pulling up a calendar and choosing specific dates (ex: Snowshoe and Winterplace).

What I am getting at is that these are what I found independently, are subject to change, might have an error somewhere, and are meant to be a worst-case scenario guidance. 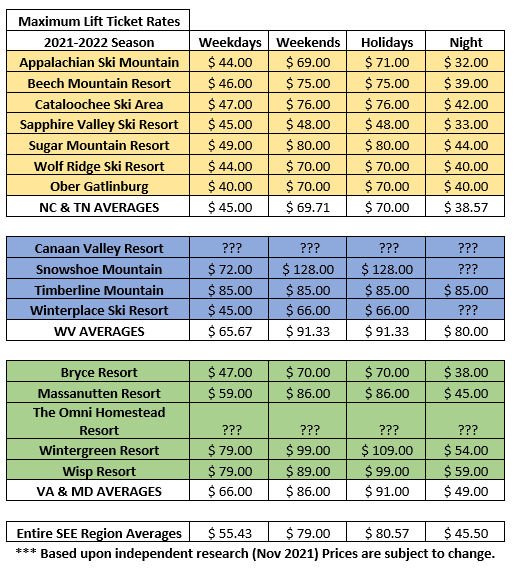 As you can see, there are a lot of differences from place-to-place, what part of the week, and whether the sun is illuminating the sky or if it has set over the horizon.  Some of the results are obvious, such as going mid-week is thrifty, night skiing is a value, and the holiday periods have a prime rate for some places.  Also, all of these are significantly lower than most of the largest resorts on the western part of North America where some of their prices surpass $200 per day for walk up customers. Yikes!

However, there are other results within this data that might not jump out like a freestyle Olympian, such as the notion that NC & TN cost less than their northern counterparts, or that the WV night skiing “average” is skewed without additional data, and lastly that Timberline was a flat rate throughout (which I found was by purchasing RFID card that I assume could be reloaded throughout the season… maybe).  I would take these results with a grain of salt, because one would assume that the areas would like to publish all of their options now as a way to attract potential customers.

Hopefully this information is supportive as is to your skiing and riding causes, but why stop there?  I agree and have gathered bonus intel on ways to save more per day.  These added values may require impulsive decisions, physical attendance, or specific timing.

For those in the VA & MD zone you should check out Mission: Four’dable quad packs offered by Wintergreen.  Essentially it is four lift tickets (RFID cards) loaded with 8-hour sessions that anybody can use at ay time during the 2021-2022 season, including more than one being used on the same day, for a total cost of $239 (aka $59.75 per day) plus a $7.99 shipping & handling charge.  Talk about a wonderful gift to hand off or ask for from loved ones as we approach the holiday period, but you must know that the time to purchase this is a small window ranging of November 8th through November 29th while supplies last. 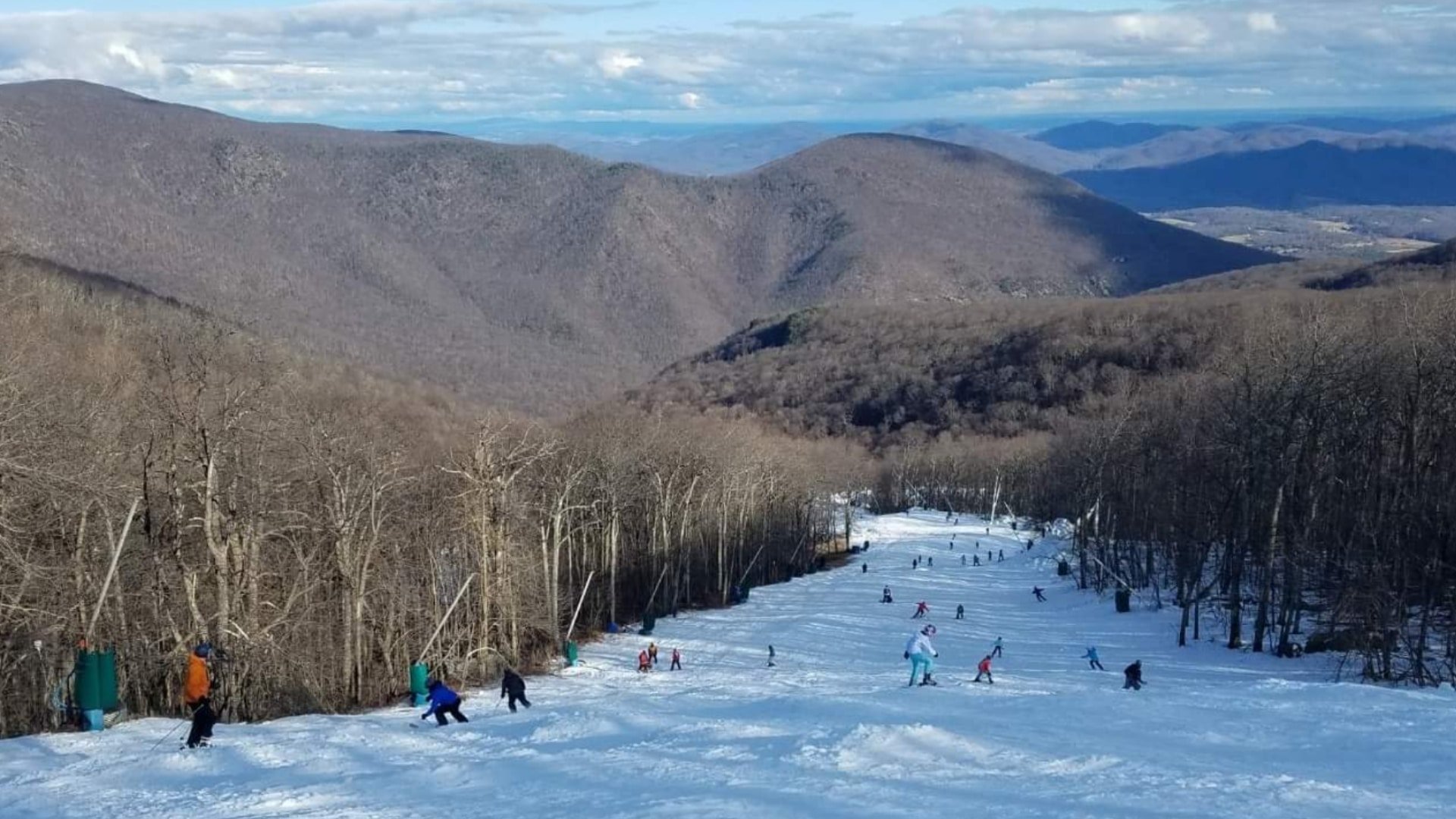 If country roads take you home in the Mountain State, consider heading down the Appalachian Highway (WV State Route-32) on Wednesdays at Canaan Valley Resort, but only if you are a resident of WV or homeowner with a state issued ID and/or proof of home ownership documents (whatever that means, but hopefully just a utility bill and not the property deed).  Nonetheless, if you meet the requirements lift tickets are a whopping $25!  This deal is valid all season except for December 29th.

Further south in the Carolinas, the deals and possible free lift tickets pop up at various times of the season, and the most consistent is the just announced Students, Men’s, and Ladies’ nights at Beech Mountain Resort in which nighttime access is $15. Students get this on Tuesdays, gentlemen on Wednesday, and females on Thursday.  I like to go mid-January when it is extra frigid outside because they have enough snow coverage and keep the snow guns shut off.

I am still waiting to see if Appalachian Ski Mountain will celebrate their anniversary in the first weekend of December. Typically, they drop prices back to their inaugural opening which is $6 per person.  By far that is the best single day deal for slope access without it being given to you for free.

Speaking of free, I recall receiving a complementary mid-week lift voucher to Beech Mountain resort two years ago when I attended a screening of the annual Warren Miller ski film in Charlotte, NC. That event was hosted by the Charlotte Ski and Snowboard Club, and in addition to the on- the-house perk, they held multiple drawings for schwag and gear, had cheap adult drinks, and showcased a terrific film.  I reached out to them this week and they said they will be hosting again on Monday November 29th at 7 PM in the Visulite Theater located at 1615 Elizabeth Ave, Charlotte, NC 28204.  I know that the movie is titled “Winter Starts Now” but beyond that I do not have any details about if there will be extra perks again.

Nonetheless it will be a good time, because these types of films always pump the ski stoke meter to off the chart levels.  If you’re in the area you should come to this event and make this an annual tradition.  Perhaps we can cheers the upcoming season together and Think Snow. 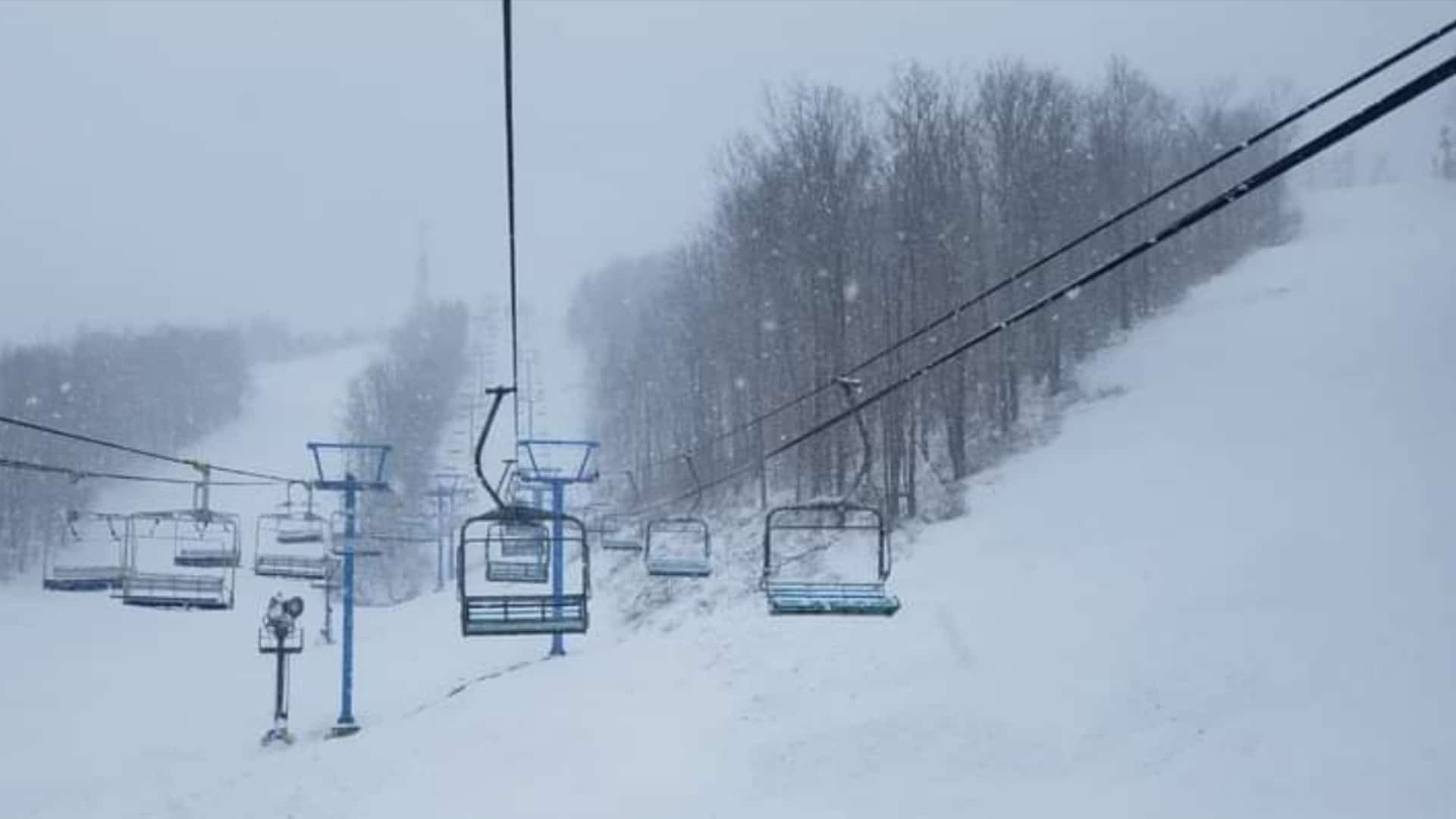