Photo of the Day is from Friday at Winterplace Resort!

Every skier, snowboarder and snow lover in the region has been watching the approaching winter storm “Izzy” for a week now…even before it was even formed. Well now it is here, or at least it will be hitting later this afternoon and evening. The BIG SNOW is set for Sunday into Monday and the even sweeter news is that we should continue to see a cold and snowy pattern for a while.

As I was texting with Panovich last night, he shared that he was posting the video above and I couldn’t help but ask him…just how much snow he thinks we’ll get here in the High Country. His prediction? 12″-15″.

We Are A Bunch of Snow Loving Freaks…

Last night I was speaking with and texting back and forth with our own Kenny Griffin, Matt Laws and Brad Panovich. Kenny is in Snowshoe West Virginia right now. Brad Panovich just returned from a ski trip out west and he’s multitasking like crazy right now with this storm coming in and I had just gotten back home from a quick day-trip up to Winterplace Resort on Friday.

By the way, Brad Panovich, Kenny Griffin and I are planning to do a LIVE FACEBOOK FEED AT NOON TODAY with Kenny on-site at Snowshoe and Brad Panovich from his WCNC News Studios…and we’ll talk about the storm and the exciting forecast ahead.

Speaking of snow loving. Yesterday I left my home at 9:15am or so, touched four states on my way up (North Carolina, Tennessee, Virginia and West Virginia) within two hours and change JUST to ski for about three hours, before having to head back in time to let my dog out of the house!

Five hours of driving for three hours of skiing. Yep, I’ll take that as well.

I would USUALLY stop and post a bunch of photos and some videos from the Winterplace visit (and I WILL get to those), but I have to share that I made the trek up there hoping to meet up with Joe Stevens, his son Christian and Winterplace Vice President, Tom Wagner. Things happen and every good skier and snowboarder knows that you have to be flexible when it comes to making plans to meet up. As it turned out, because of the approaching snow storm, Joe’s duties as a media guy kept him from getting to Winterplace just after I had to leave. Tom Wagner was swamped (it IS MLK Weekend, and there IS a snow storm coming) so I ended up making laps on Compromise down to the bottom…and I also got in a nice run down “The Plunge” which my youngest daughter Madison called “The Butt Clencher 3000”.

I had my GoPro all ready to film and it SAID it was filming but evidently there was a SD Card error and all I got was some nice runs on Compromise. I have to tell you though that Nose Dive and The Plunge were in excellent shape. The snow made it easy to hit and probably my favorite run of the day was down Compromise over to Snow Bowl and down. Snow Bowl had some nice, fall-line contours.

I hate I missed Joe and Tom, but it was a great day. We even made it in to the Snowdrift Lounge for some great Chili, Nachos and cold adult beverages.

Kenny Griffin Posted this Sweet Ride Down Grabhammer at Snowshoe Mountain on Friday.

It looks like ALL of the Southeast and mid-Atlantic ski resorts will get some GREAT snow out of this storm. Brad was saying that he really feels that Cataloochee is going to be blessed with significant snowfall. He also pointed out that the Virginia ski areas should see really deep snowfall as well. 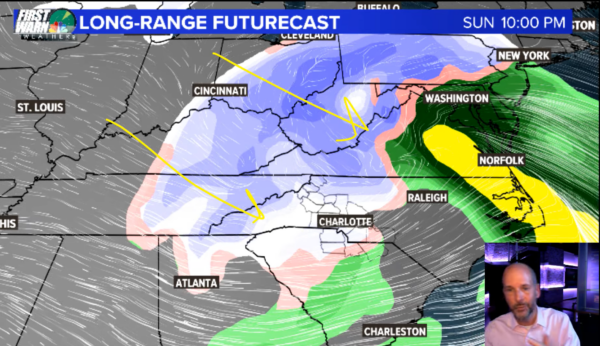 So here we are. We’ve all been watching this thing approach. We have through this evening to get ready, but hunker down after midnight. We have a few snowflakes possible this afternoon and evening, nothing of importance. The “real” snow starts late tonight and continues through the daytime Sunday. Sunday evening snow transitions to snow showers, and snow showers are in play through Monday evening.

North Carolina Gov. Roy Cooper signed an emergency order and the administration urged people to stay at home once the storm hits. The state highway agency warned that labor shortages meant crews might not respond to problems areas as quickly as normal. 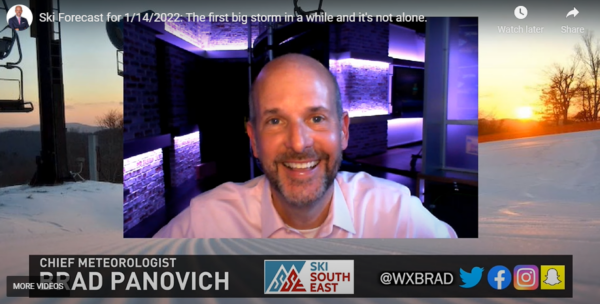 As I shared before, Chief Meteorologist Brad Panovich will be joining Kenny Griffin and myself at noon on Facebook LIVE. Come join us as we talk about the best conditions of the season happening right now.

However, while all of this IS exciting, there are a few things to keep in mind:

This IS MLK Weekend and depending on where you may be thinking of heading up to at the last moment, they MAY already be SOLD OUT for lift tickets, snow tubing and more. Lodging will be scarce as well.

You should also expect road conditions to be bad Sunday night. If you want to enjoy the snow we recommend getting to your destination by Sunday morning and waiting it out until the storm passes.

Four wheel drive will be mandatory at some locations. Driving up Beech Mountain Parkway or up Hwy 219 to Snowshoe… or WV-92 to Canaan Valley will be a challenge – especially during the height of this storm.

I have shared this with friends and readers before and often gotten a few chuckles as if I was kidding. However, while heavy snow IS what we all want to see, it is ALSO potentially dangerous. If you HAVE to be on the roads around the time of the heaviest snow, make sure that you pack extra blankets, gloves, flashlight (extra batteries), water and snacks. It wouldn’t be a bad idea to pack a shovel just in case you slide off the road or get caught in backed up traffic. Also make sure that you pack bogans, hats or something to cover your head.

A Quick Tour Through What The Resorts are Offering Today:

Beech Mountain Resort – 15 of 17 trails open. Everything open except Oz Run and The Meadows.
Bryce Resort – 100% open with 9 of 9 slopes.

Here is a nice vid by Mark Moody!

Sharon Galbraith Corsi wrote:
We spent the day skiing at Cat on Friday. I don’t know if it was the weather conditions or how you are making snow….but this was the best snow I have been on in NC EVER! Well done! We didn’t have a chance to ski last year, it was nice to come home to Cat. And the on line tickets works great. Keep plugging along our friends……you all are the best!

Massanutten Resort – reporting 16 of 16 slopes open, however, we are seeing that “Rock Drop” and “Upper MAKAttack” as closed.

Sugar Mountain Resort – 13 of 21 slopes open. Tubing and Ice Skating as well as NASTAR at noon on Oma’s Meadow.

Highlands has opened for the season today with Upper Cliffhanger, Hydraulic, and Lower Turkey. Conditions are some of the best of the season and will continue to get better throughout the weekend. We also have some more terrain opening up for the weekend. Saturday we expect to have Lower Tyro, Devils Elbow, and The Gap. There is also a chance we will have Upper Turkey and Crosscut for Saturday which would mean we would have 23 out of 26 trails open. Winter is here and we are loving it.

Winterplace Resort – Open to the top with 21 of 27 slopes and trails open and snow tubing as well.

Wolf Ridge Resort – Open with tubing and 6 of 15 slopes.

SNOW TOTALS ARE US…

Don’t forget that SkiSoutheast is THE PLACE to get all of the accurate snow totals from this storm. We will be compiling them and reporting on Sunday and Monday.

Also be sure to visit www.ResortCams.com often as the snow starts! The LIVE STREAMS should be awesome.

Previous Post
Ski Forecast for 1/14/2022: The first big storm in a while and it’s not alone.
Next Post
IT IS A “WOW” SUNDAY WITH LOTS OF SNOW FALLING.