Mission Accomplished as All Ski Resorts are Open with nice, groomed conditions for Saturday!

Several North Carolina ski areas were either closed or operating on "Holiday Schedules" on Christmas Day such as Appalachian and Wolf Ridge Resort. Others were planning to operate for schedules that began at noon. Mother Nature had different plans as a major ice storm invaded the High Country leaving 12000 residents without power as of 6pm on Christmas Day! A state of emergency was declared in Watauga County with damaged being compared to Hurricane Hugo in 1989.

We were driving down Highway 105 around noon on Friday and as we left Foscoe and got closer to Boone LINES of trees had either been uprooted, were leaning across the highway or were broken and laying on the roadways. Power lines were down across Highways 105 and 321 as we drove south towards Blowing Rock. Traffic lights were out throughout most of that drive and at one point near the Wal Mart on Blowing Rock Road Boone Police had blocked the road and power company crews were working to reconnect power lines.  Power poles were snapped at dozens of locations.

The temps were hovering around 32° through the mid day and as HEAVY – but freezing rains fell trees and power lines cracked under the weight causing an untold number of power poles to literally snap into. Trees buckled under the weight and layed across all lanes of traffic entering and leaving the High Country. Secondary roads were even worse.

Few people ventured out due to the icy conditions, but the roads were easily drivable once the rains began to pour around 10am. Those same rains that caused heavy ice accumulations on trees and power lines cause a river of water to flow as a lot of the snow pack that still blanketed the area due to last weekend’s massive snowstorm – melted.

There’s still a ton of snow everywhere and temperatures have returned to the low to mid 20s this morning across all of the North Carolina ski resort areas. Thankfully we can report that ALL of the ski areas are operating with full power and lots of groomed conditions and most all of them made or are making snow now!

Travel into the areas major roadways is perfect as crews worked through Christmas and Christmas night to cut and clear trees and poles from the highways.

We should all thank all of the hard working people that sacrificed their quality family time to make this happen! A lot of power company employees and fire & police department people put in a lot of hard work and time in the last 24 hours to make today a normal day for skiers and snowboarders heading to the mountains.

There will be some businesses in the High Country without power today as crews continue to work to restore power to all areas.

I arrived back home yesterday evening from visiting some family on Christmas Day and we were amazed at how the roads had already been cleared as darkness began to fall in the area. There were some trees still down across Highway 105 but for the most part things looked vastly improved in just a short few hours.

Around 10:30pm Brad Moretz of Appalachian Ski Mountain called to tell me that they had crews working all day and into the night to clear the 1.5 mile entrance road that runs from Highway 321 to the ski area. This morning at 5:30am Marketing Director, Drew Stanley called to tell me that they would be operating with 100% of their mountain and easy access for all vehicle types (2 and 4wd) due to the hard work of a lot of people.

Although the entire state was DUMPED ON with heavy rains on Christmas Day, really only the High Country ski areas (Beech, App and Sugar) were affected by the heavy accumulation of ice from the freezing rain.

Just as it seemed Western North Carolina had finally recovered from the biggest snowstorm in more than a decade, the region was hit by bad weather again on Christmas Eve and into Christmas Day.

High winds, rain and freezing rain brought down trees and power lines, plunging more people into darkness just as power companies had nearly finished restoring power to thousands who lost it during the snowstorm that dumped more than a foot of snow in the Asheville area.

Even so, all of the North Carolina ski resorts are back at it, making snow and operating with VERY NICE, groomed conditions.

Appalachian Ski Mountain – 25° – 100% open with all slopes and trails groomed to corduroy perfection! All three terrain parks are open as well as ice skating! App wanted us to thank all of the hard working people who sacrificed spending quality time with their families on Christmas Day to get the roads cleared and power back on. "You guys are all part of our family now!", says Drew Stanley.

We spoke with Brad Moretz last night and Drew Stanley at 5:30am this morning and crews worked all Christmas Day and night to clear the mile and a half entrance road from Hwy 321 to App. Power was restored at 7pm last night and App will be fully open, groomed and in excellent condition for day and night sessions today. 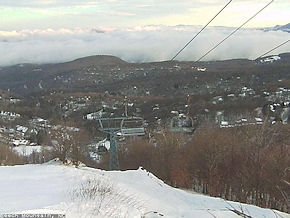 Beech Mountain Resort – 24° – Making snow and open for day and night sessions with 12 of 15 trails that are all groomed! Ice skating and terrain park features open as well. Talia Freeman posted, "The Beech Tree Bar and Grille will offer live music this Saturday evening starting at 8pm."

Pretty much everything at Beech is open now with the except of Upper White Lighning, The Oz Run and the dedicated Terrain Park where the old tubing hill used to be. The new tubing park is not open yet but will open soon!

Cataloochee Ski Area – 21° – They made snow and will be 100% open on Saturday for day and night sessions with 100% of their mountain open, terrain park and tubing as well. Expect groomed powder conditions at The Cat. 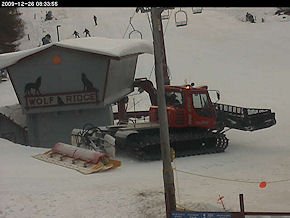 Wolf Ridge Resort – 24° – They did not make snow but will open today with 18 of 20 trails and a portion of their terrain park available and snow tubing as well. Wolf has it going on this season and Rick Bussey and his crew posted this today, "It’s Saturday morning, December 26, the sky is blue and its 24 degrees. We have 18 of our 20 runs open, four of our five lifts in full operation, and we should have the Breakaway ski through tunnel slope ready soon. Our Bowl run is getting awesome publicity and the slopes are in the best condition ever. We will be open at 9:00 am today and look forward to seeing you on the slopes bright and early. Come join us at the Wolf!!!"

You will have your choice of terrain and with the connector slope and lift open connecting the top and bottom Lodges, you can ride quite a variety of slopes.

You heard him, go enjoy!

Sapphire Valley – 28° – They were working on the chairlift as of 8am this morning, but expect to open for skiing and tubing at 10am or so. We spoke with Wendy from there and she said they had it rough on Christmas Day but with 4" of RAIN! No ice over there! They will be open with both slopes and tubing for Saturday!

Sugar Mountain – 24° – Making snow and open today and tonight. Ecpect perfectly groomed conditions to start the day with 17 of 20 trails open, tubing and ice skating as well. Sugar will have NASTAR at noon today.

Sugar was without power on Friday and did not operate as scheduled, but will be operating on Saturday!

Hawksnest Tubing Park – 23° – We have not heard from them so we’d suggest calling ahead if you want to go tubing.

Previous Post
Christmas Day Ice Storm Causes ‘War Zone’ in Some Areas – This Photo was taken in Boone
Next Post
Groomers will insure GREAT CONDITIONS today! This is a groomer at the top of Main Street at Wisp Resort