Lots of Fun Activities are Planned for this Weekend at Various Resorts!

Meteorologist Brad Panovich is talking snowfall totals this morning via his latest Skier’s Forecast Video. He’s sharing the news that our ski areas are displaying more EPIC SNOW than any of us can remember on any previous March 2nd within the last few decades.

Now if we can get all weather and television broadcast peeps to do the same then maybe we can see some extension of what has been a great ski season to date! More about that in a minute.

Brad’s snowy weather update this morning is forecasting perhaps a bit more snow in the North Carolina mountains than further north this time around as the low generates plenty of moisture in the area. HOWEVER, as has happened numerous times this winter, once that low moves off the coast we’ll see those now familiar northwest flow snows cranking back up again and dumping snow into West Virginia and Maryland into Wednesday. Translation, although it looks like there’s plenty enough moisture to create a lot of snow out of this system that is making it’s way through on Tuesday, the mountains may get MORE SNOW once that system moves out and allows the northwest flow snows to kick in on the BACK side of this system or event. 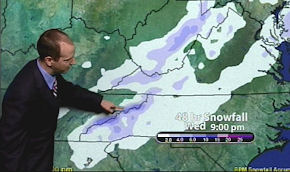 That means snows for today AND Wednesday we could see a few more inches of snow for the North Carolina mountains today and Wednesday. As much as 7-8" could fall in the next 48 hours according to Brad.

The long range temperature forecast is looking a bit more "normal" for this time of year with plenty of overnight cold temps that would allow for snowmaking for those resorts that might want to "top things off" with some manmade snow, although it really isn’t needed. Daytime highs for this weekend will be in the 30s for the most part and then moderate a bit to the mid and upper 40s into next week. Those temperatures look "balmy" compared to the cold and snowy pattern that we’ve seen all season long but they are actually pretty well normal or average for this time of year. 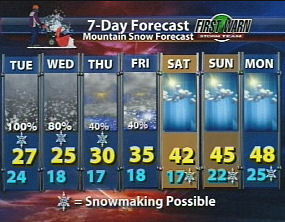 Brad’s forecast video ends with a mention that we could not have timed this weekend’s SkiSoutheast.com / Snowshoe Summit weather any better as we should see some snow Friday night and sunny skies and temps in the 30s all day Saturday.

We’re up to 120 fellow ski and snowboarding – snow loving souls that are making the trek with us to Snowshoe this weekend. If you’d like to save $100 OFF any two night stay at Snowshoe and get a free lift ticket to ski or ride on Sunday…check out our deal at:  SkiSoutheast Summit

We’re getting some season closing announcements and plans.

I guess since we’re talking about it, we might as well just skip the base reports (they are ALL great) and just cover slope openings and sessions. Here we go…

Appalachian Ski Mountain – 100% for day and night sessions. Terrain and ice skating are open as well.

Beech Mountain Resort is 100% open for day and night sessions and ice skating. Tubing is closed.

Cataloochee Ski Area – 100% but for day sessions only. Terrain park is open. Tubing is not open until Thursday and this will be their last weekend of snow tubing. So if you want to tube at The Cat, do it this weekend.

Also, Cataloochee is holding what they call their BIG BIG BIG SEASON PASS SALE which is a one day only event this Sunday on March 7th. Pass prices on this day will be the lowest of this year and next and if you are a new pass holder, you can ski for the rest of this year and next on this pass! Don’t forget on this day there will be special pricing not only on midweek passes for every pass we offer as well! What a deal! These special prices (including our midweek season pass for $169) will be available from 8:30am – 4:30pm only on Sunday, March 7. Only 500 of the $169 midweek passes will be sold, so remember to purchase early on March 7 to get yours before they get gone! You can purchase here at the area or call in between the hours of 8:30am-4:30pm on that Sunday only. Our early season pricing special at its next tier will continue from March 8 through March 31. Pass pricing will go up on April 1. Don’t miss out, get the best deal on March 7. Also don’t forget that beginning March 8, we will begin our late season skiing hours, where we will open for twilight and night skiing Monday through Fridays from 1pm until 10pm and day skiing only on Saturdays and Sundays from 8:30am- 4:30pm through the end of the season on Sunday, March 21.

If I’m not mistaken that is saying that Cataloochee plans to close for the season on March 21st. That’s a little earlier than we would have predicted but there you have it.

Sapphire Valley Ski Area is CLOSED until Friday when they will be 100% open with tubing and both ski trails. They have previously announced that they will operate ski and snowboarding (and tubing) ops until March 14th.

Sugar Mountain is open with all but the Big Red slope. That’s 19 of 20 trails. They are open for day and night sessions. Not sure why Big Red isn’t open but our guess it will reopen quickly. We talked about it on Monday but this weekend is the annual Dick Trundu Sugar Cup Competition. Check out Sugar’s website for details on that great event. www.SkiSugar.com

Wolf Ridge Resort is open for day and night with 14 of 20 trails. That has been their operating procedure all season and they’ll be open with all 20 trails this weekend.

Snow continues to mount up into West Virginia and Maryland!

Canaan Valley Resort picked up another one-half inch of new snow and now are at 246.8" on the season and of course more snow is in the forecast for today through Friday! They are open for day sessions only today.

Canaan will be hosting their "Wild Thing" celebration this weekend. They posted, "Don’t miss Wild Thing Weekend, March 5-7, 2010. The weekend is filled with entertainment, games and contest the whole family can participate in, great food, and much more. Cheer your friends as they dare the Infamous Pond Jump. Call 800-622-4121 to make your plans to visit West Virginia’s Winter Playground in the mountains at Canaan Valley Resort."

Canaan also celebrates their 38th anniversary weekend March 19-21st so they will operate at least through that weekend and we’ll get word of any season extensions.

Snowshoe Mountain is open for day and night sessions and they have 59 of 60 trails open and tubing, snowmobiling, snowcat tours and more! Snowshoe has already announced that they have extended their season through April 4th this year! Snowshoe is hosting our 3rd Annual SkiSoutheast Summit this weekend during what should be awesome conditions.

Laura was telling me yesterday that they have literally ran out of places to put the snow that keeps falling! There are piles of snow everywhere and more snow is on the way all week and this weekend is booking up fast!

I spoke with Sonny Gower up at Snowshoe’s lodging last night and they have about 60 units left to rent in The Inn at Snowshoe and some nice units in Snowcrest and Top of the Mountain. But they are booking up fast for what should be a crazy, awesome summit weekend!

IF YOU LIKE SNOW AND WANT TO SAVE $100 off lodging and ski free on Sunday, click here> https://www.skisoutheast.com/2010_SkiSoutheast_Snowshoe_Summit.htm

Timberline Resort is operating for day sessions only today but with 100% of their 37 trails.

Winterplace Resort is 100% open for day and night sessions with 100% of their trails, terrain park and tubing!

Like all of the ski areas, Wisp is enjoying their best season in years with another 1" of snow and now 220.5" of snow on the season. They are 100% open for day and night sessions, ice skating, tubing and mountain coastering!

Ober Gatlinburg ski area has not had quite the kind of snowfall tallies as many of the ski areas of the region but they are nevertheless in great shape and 100% open with all trails and snow tubing.

None of the Virginia, Tennessee nor North Carolina ski areas reported any measurable snowfall although there was a dusting of snow in Boone and Banner Elk this morning.

Bryce Resort is only open for day sessions and only with 4 of their 8 trails open today. They were 100% open on Monday so we called up there to see what was happening and Ryan Locher was busy and couldn’t take our call. We spoke to "Al" and he basically said, "Well, it’s getting close to the end of the season and it’s a Tuesday and we don’t have many people coming so we’re cutting back."

He did say that they would be 100% open for Saturday but that would be the last full day/night, 100% day for them. They are anticipating their last day of snow operations to be March 14th.

Bryce is hosting their "Grand Finale" Winterfest this Saturday. They write, "Winterfest is the Grand Finale of our winter season. It starts with a delicious pancake breakfast in the Fireside Grill, and is immediately followed by a Costume Parade. Guests are entertained by the imaginative costumes of resort staff, members and visitors. ‘Kids’ of all ages participate and costumed skiers and riders adorn our slopes all day. Children’s games and activities, including face painting, entertain your little ones, and DJ Doug gets everyone dancing in their boots on the snow. The afternoon culminates with a Rail Jam Competition and the ever popular Pond Skimming event. Sign up for the last two events in the Ski School. After a long day of fun on the slopes, kick back in front of a roaring fire in the Copper Kettle for a little Apres Ski. It’s a day of fun at Bryce you won’t want to miss!"

Massanutten Resort is 100% open with tubing and skiing available for day and night sessions. Terrain park open as well. They have announced that they plan to ski and ride through AT LEAST March 28th. They’ll go longer if you guys keep visiting!

The Homestead is open for day sessions only on 100% of their trails and they have their kids mini snowmobiles and tubing open.

We’re on day 96 and there are 41 more days of opportunities to enjoy the snow for the 2009-2010 ski and snowboarding season!

That’s it for today. Go enjoy the snow! Check out the Snow Report at https://www.skisoutheast.com/skireports.php  and please send us your favorite ski photos, ski videos, trip reports and comments to [email protected]

Previous Post
The Perfect Trip to Snowshoe!
Next Post
Come join SkiSoutheast.com at Snowshoe Mountain this weekend! Get Huge Discounts and more!