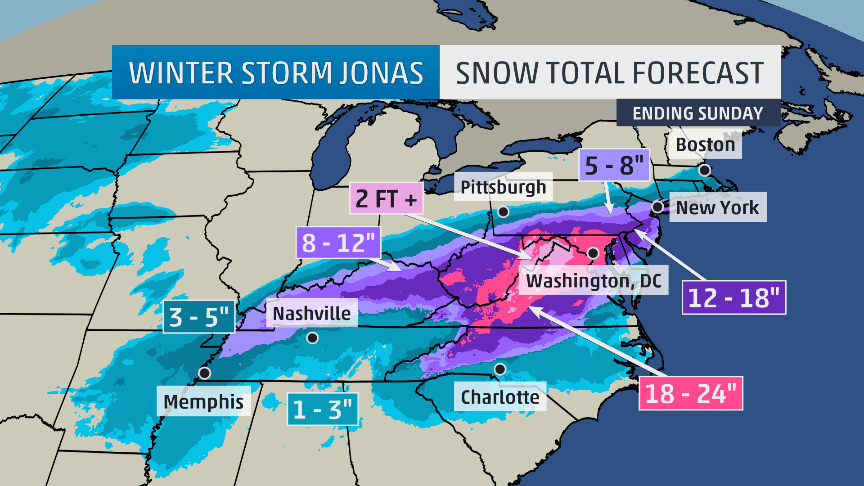 Oh my goodness, I don’t even know where to start this morning.  I am AMPED for the next few days.  I have no idea how I’m going to get any work done today because I am so giddy with excitement thinking about the heavy snow in the next couple of days.  Calm down Kenny.

Let’s first start with the snow that actually fell yesterday.  It was a nice teaser event that dropped several inches at many of the ski areas in the region.  The afternoon sessions yesterday were probably really fun with a nice layer of fluff on top of the groomers. At times it was coming down pretty heavily based on what I saw on the webcams.  Here’s a screengrab I got from Wolf Ridge in the afternoon.  It’s actually a video and you can click on the image to play it.

Let’s take a look at those snowfall numbers…

Wolf Ridge is the winner and I won’t lie, I was a little hesitant when I saw that 5 inch number.  However, I checked out a nearby station on CoCoRaHS and it also showed 5 inches of snow, so that snow report checks out.  While I’m on the topic of Wolf Ridge, they opened up another trail today and are now 100% open!  All 15 trails are open just in time for the big snow.

Everyone must be feening for some snow because as soon as the flakes started falling yesterday, visitor traffic on Resort Cams exploded.  The snow started falling around midday and you can see the correlation on the graph below.

We set a new record for most simultaneous viewers of the live webcam streams.  I’m not going to share that number out, but it definitely surprised me a little.  People love them some webcams!

A Break in the Action Today

We’re going to see a little break in the action today.  It’s the calm before the storm.  A big storm.  It’s pretty interesting to me to see just how much the weather can vary from the northern portion of the region to the southern.  For instance, look at the current conditions atop Beech Mountain. 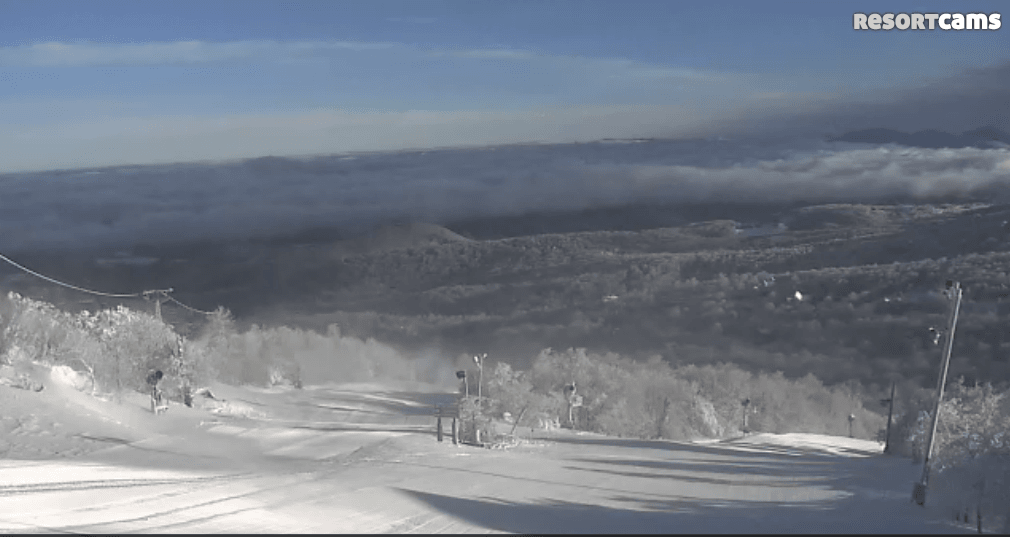 Beautiful.  Sunny and plenty of corduroy.  I was watching the base cam and one lucky skier was getting some first tracks.  It looked real nice.

Meanwhile, up in Maryland Wisp Resort is cloudy with some ongoing flurries.

It should be a nice day of skiing and snowboarding wherever you go today.  There’s plenty of open trails and snow conditions are superb right now after yesterday’s snow.

The big snow is almost here.  I’ve been talking about it all week and social media has been abuzz with details about it.  Starting tonight we should see snow begin in the North Carolina mountains and spread northward throughout the day tomorrow.  Every ski resort in the region looks to get in on the action and this could be the most widespread snow event we’ve seen in a few years.  So pumped!

This is what the National Weather Service currently thinks.  The heaviest snow will fall at the Virginia ski areas. 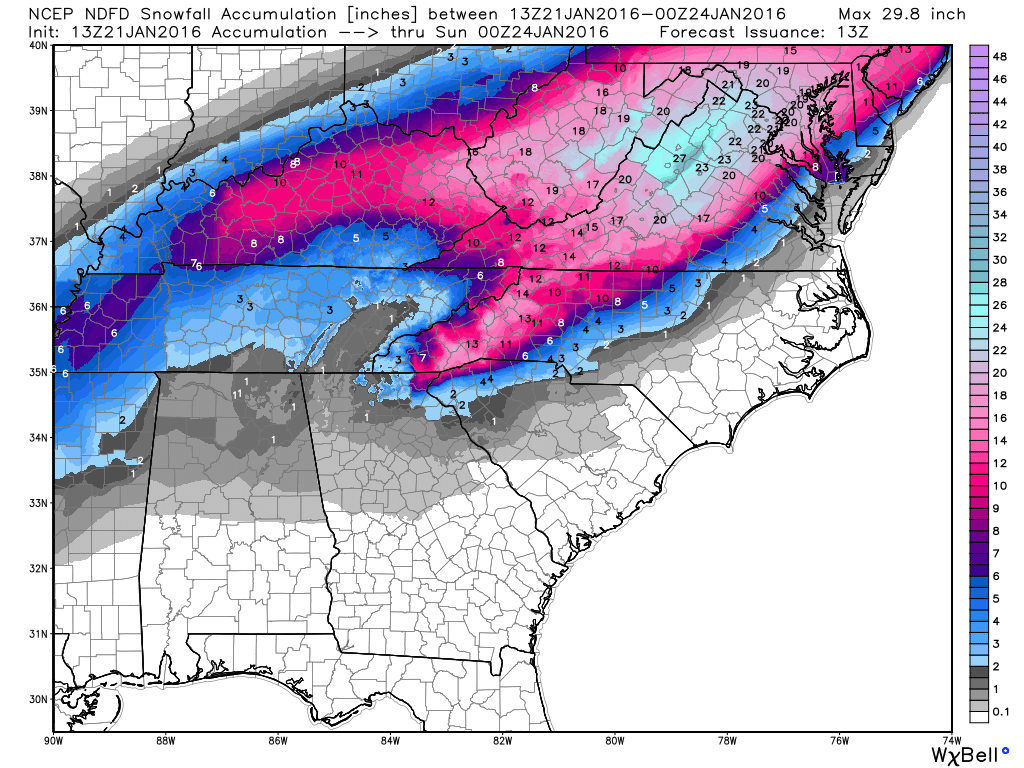 The Weather Channel has a similar thought on the storm.

Both of those outlets have the Virginia and West Virginia resorts getting a pretty good pummeling, with upwards of 2 feet possible.  If I had to pick a spot to get the most snow, I’d go with the Virginia ski areas.  They have consistently been in the bullseye over the past several days.  Saturday should be rather epic up at Wintergreen, Massanutten, Bryce, and Homestead.  Just take a look at the NWS forecast for Friday night at Wintergreen.

Snow. The snow could be heavy at times. Low around 18. Wind chill values as low as zero. Windy, with a northeast wind 24 to 31 mph, with gusts as high as 44 mph. Chance of precipitation is 100%. New snow accumulation of 12 to 18 inches possible.

A foot to 18″ of snow overnight means it will be untouched for Saturday morning.  And that’s after 3 to 7 inches during the day of Friday.  And it’s supposed to be heavily snowing Saturday.  Just insanely awesome.

Down here in North Carolina, the northwestern part of the state looks to get the most snow.  That includes Beech Mountain, Sugar Mountain, and App Ski Mountain.  Mike asked me yesterday what he thought those areas, including Boone, would get.  I said 12-18″ and I still like that range.  It wouldn’t surprise me though to see the top of Beech and Sugar go above that range.  One of the local forecasters in the High Country is very bullish and has a wide swath of 18-24″ on his forecast map.  I hope he’s right as that would be awesome!

Mike and I are going to be doing a live broadcast from Sugar Mountain tomorrow at 9am.  We’re going to be at the top of Oma’s Meadow.  It’s the location where the Sugar Ski & Country Club Cam is.  To watch us, just go to the link below, looks like Mike has it posted.

We’re then going to get some turns in.  I cannot wait to ride the new lift at Sugar…and on a powder day at that!  It should be dumping (NWS says 7-11″ throughout the day) and I can’t wait to spray some powder on Whoopdeedoo and Gunther’s Way.

We’re then going to pop on over to Beech for a bit and get some runs in up there.  We should have a ton of photos and video to share with you on Saturday, and I’ll be posting a bunch of stuff on social media throughout the day I’m sure.  So make sure to follow us on Twitter, Instagram, and Facebook if you’re not already.

Make Plans and Be Safe

I’ve had a few people ask me about road conditions and what not.  I don’t like to tell people what to do, but if you can avoid driving tomorrow I would highly suggest it.  I’m going up to Boone this evening so I can avoid the mess tomorrow morning.  The morning hours might be okay tomorrow up in Virginia and West Virginia, but definitely not so much here in North Carolina.  If you wait until after work tomorrow to leave you are going to have a rough go of it.

The roads on and off the mountains look like they are going to be trouble, with snow, sleet, and freezing rain all possible.  Four wheel drive is going to be a necessity so don’t try and take your little Honda up the Beech Mountain Parkway.  Ha.  If you can, get up to the mountains tonight!

Enjoy your Thursday and check back tomorrow morning for the live broadcast.  It’s going to be a fun few days here in the Southeast!

Previous Post
Cross Country Skiing on Our Minds
Next Post
Bring on the Snow at Wisp Resort!