A Little More Snow for Some Today, Great Conditions for Everyone! 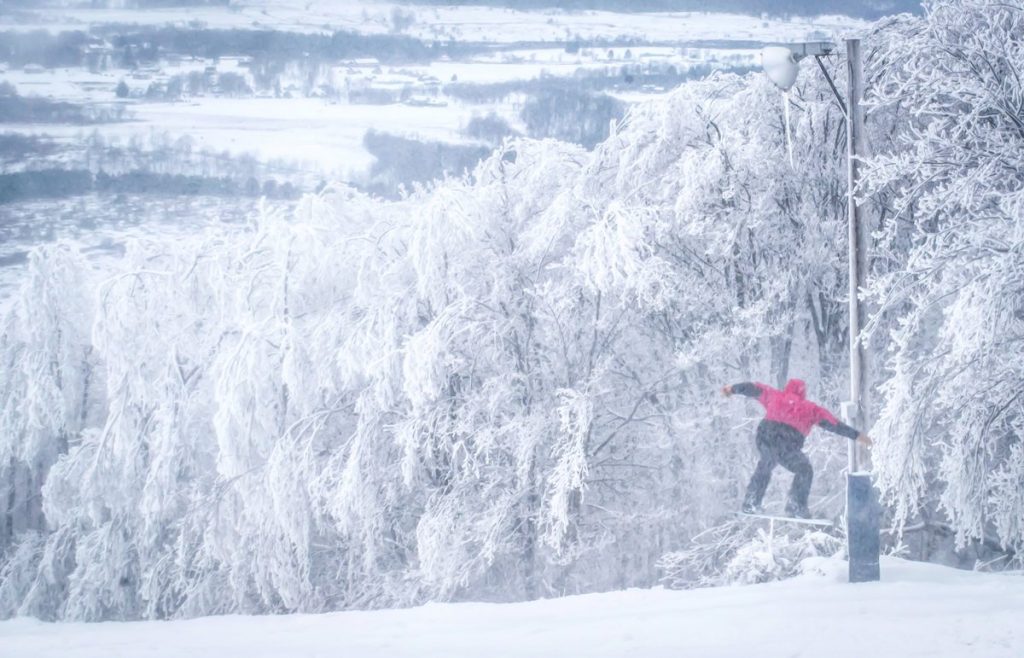 The ski areas in the Southeast are separated by a sharp dividing line right now.  Northern West Virginia and Wisp Resort in Maryland have seen continued cold yesterday and today with light snow mixed in as well.  Everyone else is in the midst of a micro thaw as temperatures were fairly warm yesterday with lots of sunshine.  Case in point, check out the webcam at Timberline this morning. Snow!

And then look at Cataloochee’s base cam where it’s a sunny morning and temps are almost 20 degrees warmer.  Corduroy! 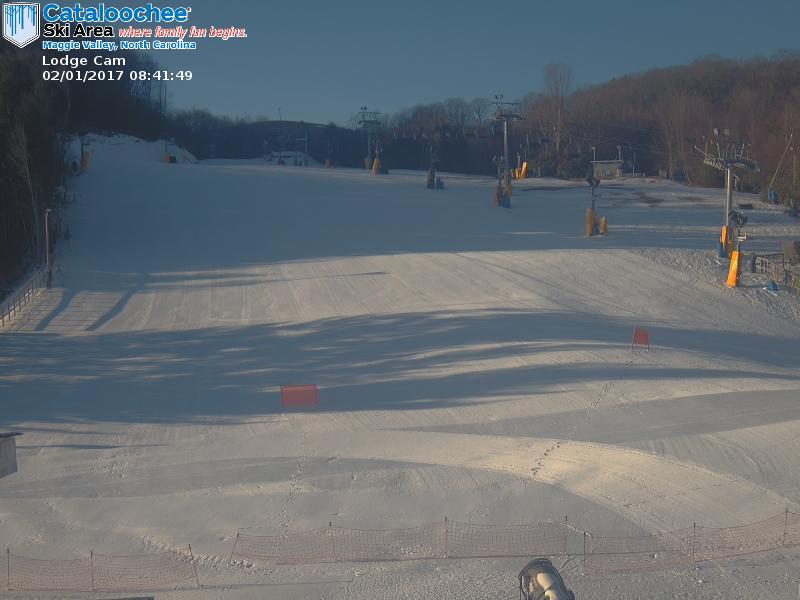 Canaan, Timberline, and Snowshoe are all reporting an inch of new snow this morning and the forecast for all three resorts is for 1-3″ today.  Same goes for Wisp Resort.  The past 9 days now has been certainly good for them up there!  Snowshoe posted a new video which shows just how good that powder day was on Monday.  I continue to regret my decision not to go up there.

Everyone else is going to see one more day of relative warmth before things begin to cool off once again tomorrow.  Temperatures yesterday outside of those northern ski areas were in the 40’s and low 50’s and that looks like the case again today, maybe just a few degrees cooler.  This little break from the cold should help to refill the snowmaking ponds for the weekend.  As for the weekend, I’ll let Brad Panovich talk a little more about it as he sent in his latest video forecast.

This isn’t a terrible weather pattern to be in.  Brief warm ups during the week with cold and a little snow on the weekends.  I’ll take it.  As a weekend warrior  myself, I always like to see cold and overall good weather conditions for the weekends.  The life of a snowboarder with a full time job is a funny one.  I got done riding on Sunday at Beech and that night I was already planning out the next weekend with my buddy.  My fiance dreads winter every year I think as my weekends from December to March pretty much revolve around snowboarding.  Before we make any weekend plans I have to check the forecast and see what the weather is going to be.  Thankfully, it looks like Saturday will be nice and I’m already pumped to go riding at Beech again.  Sorry honey.

A Look Back at January

We’re into February now, which is hard to believe, and I wanted to take a look back at the weather for January.  It sure was a weird month.  We had a pretty good cold snap at the beginning followed by a severe thaw in the middle of the month.  We then bookended the month with another decent cold stretch.  That thaw was brutal and I can’t remember a January where we had two weeks of no snowmaking.  Unheard of.  So, let’s take a look at the numbers and see just how the month compared to other years.

Let’s first take a look at Beech Mountain.  The weather station up there only goes back to 1991, so obviously this isn’t the largest pool of data.  It’s enough for these purposes though.  This past January ended up being the second warmest one in the 26 years of reporting from that station.  The average temperature was 34.3 degrees.  That sounds cold, but in reality it’s really not for January.  If only looking at data from 1991 and on bothers you, I also included the data for Banner Elk, which is very close in proximity to Beech.  Data from that station goes back to 1907 so it gives a better look at things over a longer period of time.  Last month was the 15th warmest January on record for that station. 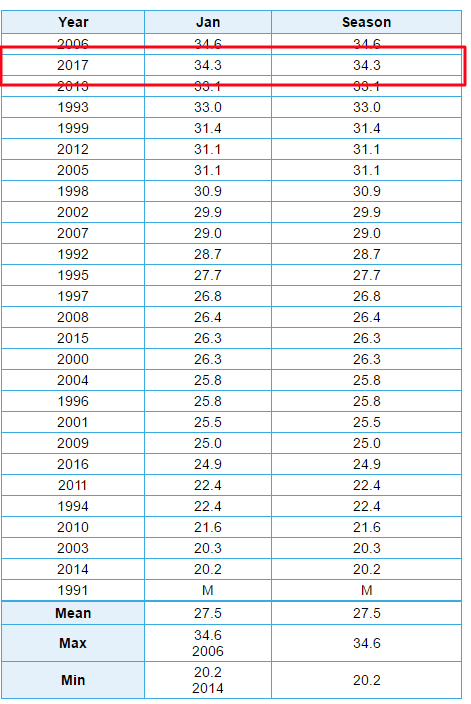 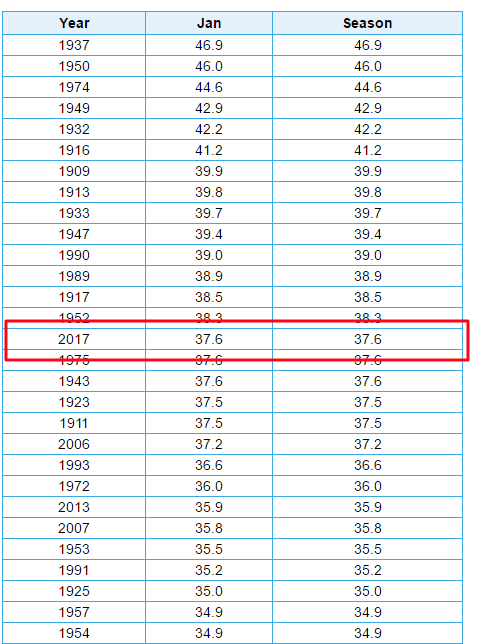 We can also look at the number of days with a low temperature below or equal to 32 degrees, i.e. days with snowmaking temps.  This past January had the least amount of days meeting that threshold.  Only 14 nights got at or below freezing up there.  The next closest year was 2005 when it only got below freezing 18 times during the month of January.  The average is 24.  Again, this is only since 1991 but it definitely is less than ideal.

We can also look at the weather station atop Snowshoe Mountain.  This station has info that goes back to 1975, so our data pool is a little bigger than Beech’s.  Still, it’s only a brief look at things in a historical sense, but for this purpose it gives a general idea of things.

For Snowshoe, last month was the 5th warmest January on record up there.  The average temperature was 28.1 degrees.  Again, that sounds cold but compared to normal it’s really not. 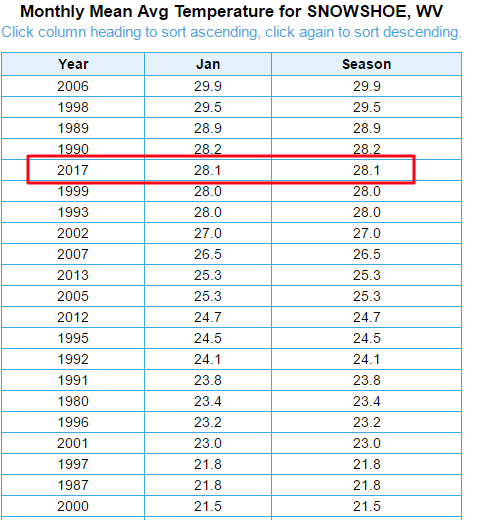 Looking at days with a low temperature at or below 32 degrees, and we see that Snowshoe had 23 days meeting that threshold.  That is tied for the least amount in any January since 1975. 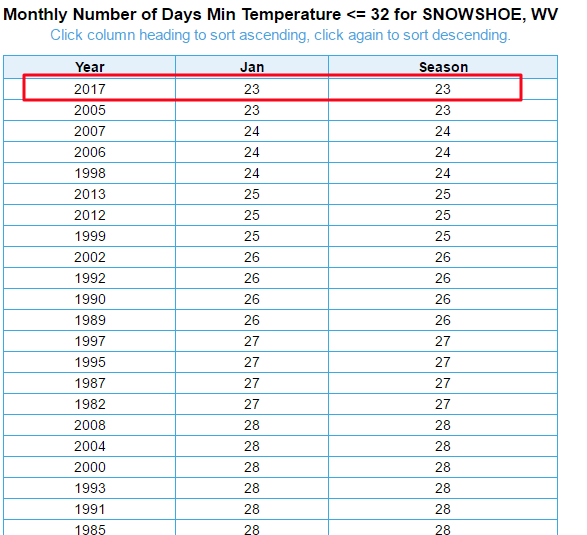 The average is 28, so while they were under that, they weren’t nearly as far off from normal as Beech Mountain.  That data in general for this stat is much more bunched together for Snowshoe than it was for Beech.  Two years ago, every single day in January had temperatures below 32!

You can draw your own conclusions from those numbers, but we all know the middle of January sucked!  If it wasn’t for that early cold snap and then this most recent one things would have been looking pretty dire.  Kudos to all the ski areas who were able to remain open during that brutal stretch of weather.

Enjoy your Hump Day and stay tuned in the coming days.  Mike and I will have a big announcement either tomorrow or Friday, so keep checking in!