While Not the Storm We Were Hoping For, It’s Still Gonna Snow! 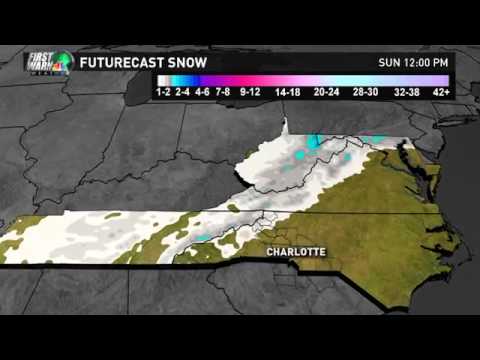 It’s Friday wooo!  Another week has come and gone and an interesting weekend lies ahead of us.  The ski resorts will have to contend with snow (woo!), freezing rain (boo!), sleet (boo!), and even some nasty old rain (double boo!).  What looked so promising a few days ago now looks to be a minimal event.  STORY OF THE SEASON.  I’m trying to stay optimistic though, and I will remind you all that there is still several inches of snow that will fall with this system, mainly tonight and early tomorrow.  Another little clipper system passes through Monday, which should bring another dose of snow to the region.  WCNC Chief Meteorologist Brad Panovich sent us his latest video forecast this morning, and here it is.

The title of Brad’s email that he sent me was “The snow is coming!!!”.  He’s wanting some natural snow just as much as the rest of us.  Hopefully the storm he alludes to next weekend comes to fruition.  I was looking at some of the long range ensemble models this morning and the pattern looks conducive.  Even without natural snow, it’s going to be cold which will allow for snowmaking.  Hopefully though, we can get another storm like this one except we’ll have colder air in place.

If it makes any of you feel any better, conditions out west look pretty crummy over the next couple of weeks.  Snow conditions will probably be better here.  Crazy.
Events
As I like to do every Friday, let’s talk weekend events.  Actually, there’s not too many going on.  I guess most of the resorts are in chill mode after MLK weekend.  I don’t blame them.  Wintergreen and Snowshoe have some stuff going on though.  Check it out.

Don’t let old man winter get you down! We have a fun weekend planned where you’ll find the exhilaration of winter sports and games! Key highlights for the weekend include Women’s Ski Clinic (Friday/Sunday) USASA Slopestyles/DoubleCross on Saturday and Sunday, and Freestyle Double Cross on Sunday.

There’s all kinds of stuff going on up at Wintergreen this weekend, so make sure to click on that link to see the entire weekend itinerary.  They’ve been killing it with snowmaking this year and are nearly 100% open, so it should be a great weekend and riding up yonder.

Snowshoe is hosting their 1st ever Head Women’s Ski Camp.  Lots of stuff going on with this too so make sure to click the more info link.

Its girls out front and boys on the side this winter!  Snowshoe is gearing up to host our 1st ever Head Women’s Ski Camp; a weekend that’s all about the ladies.  Whether it’s your first time on skis or you’ve been killing it on double blacks for years, Head Ski Camp is two full days loaded with instruction and fun led by our all-female team of expert Snowshoe coaches, including a guest coach from Head Ski.

That’s it for me this week.  Enjoy the weekend and get out and play in the snow if you can!