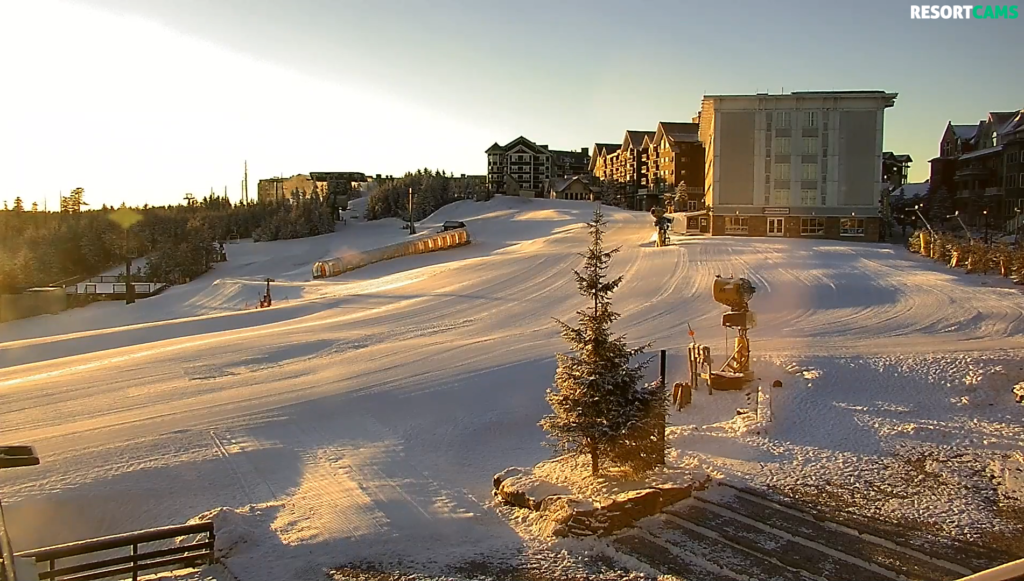 I struggled with just what to title today’s FirsTrax report. It could have been:

Yet Another Great Weekend After Rain All Week

If you want to check out the Video Snow Report, click on…otherwise scroll below for more FirsTrax.

Base Depth Soar and a Drone or Two as Well

As I updated the Snow Report this morning, I couldn’t help but notice more than a few ski areas had upped their reported base depths by 10″ +/-.

Normally, I might react to that with a small bit of disbelief, however, when temperatures dip into the 4°-15° range at all of the mountaintops over the last 24 hours…it can happen. Awesome I will tell you that around 6:15am this morning I witnessed some cloud banks of snowmaking at several ski areas.

Here’s a nice shot of Snowmaking at Bryce Resort

There’s plenty more notables below…but check out some of these captures this morning:

We kept checking in on the webcams on Friday as we kept getting reports of snow falling. It was a beautiful, blue sky kind of day all day on Friday in the North Carolina, Tennessee, and Virginia mountains, but another 4″ of natural snow fell on Friday (all day) at Canaan Valley Resort in West Virginia. 5.9″ over the last 48 hours there.

Another 2″ fell at Snowshoe, taking them  to 6″ in the last seven days. So things are definitely snowier up there.

A trace of snow fell earlier on Friday morning at Beech, Sugar and Ober – but none of them reported any measurable snow to their seasonal tally. I was admittedly surprised to see that Sugar had not reported 2″ as they have been vastly over-reporting all season long.

Since we are in a President’s Day Weekend mode…I’ll say that Sugar’s natural snowfall reporting has been kind of “political” this season. It always amazes me how two otherwise logical and intelligent people can look at the exact same data (or anything) and see two entirely different things.

In the case of Sugar –

Definitely snowier, Beech Mountain Resort has only reported 31.5″ of snowfall on the season.

Let’s Share a Couple of Notables…(you can scroll on down for even more FirsTrax today! (I’m wired this morning.)

Massanutten Resort is offering Free equipment demos today provided by Freestyle Ski & Board shop at the base of lift 6 and Never Summer snowboard demos at lift 4.

Sapphire Valley hosts the Great Outhouse Races! today at 2:45pm or so.

Snowshoe Mountain – They keep ramping things up and now have 190 acres open on 51 trails. They also KNOW how busy this weekend will be as they are advising people to:

Beat the crowds by heading to Silver Creek, open from 9AM to 9PM today! Shuttles depart from the village loop every 15 minutes.

Bryce Resort is doing a torchlight parade at 8:30pm tonight. Here is a shot at last year’s…I think.

Not sure why, but I woke up at 2:30am this morning and could not go back to sleep, so you guys are either getting rewarded or punished for it with all of this data dump of commentaries…haha.

On Friday evening I posted a video showing just how amazing things look at the ski resorts around the region and that prompted a few emails in my “skiMail” inbox – either commenting on or asking about “how bad this winter has been”.

It has been one crazy, wild ride in terms of the weather, but the truth is when the dust settles at the end of the season don’t be surprised if you don’t hear about how great this season has been in terms of skier visits at various resorts around the region.

This weekend is President’s Day weekend – the last long, four-day weekend for our ski resorts in the region and the conditions could not be a whole lot better in terms of weather and on-slope conditions.

High temperatures for this weekend will range from the low-to-mid 20s for today; maybe upper 30s for Sunday and perhaps 40° or so for Monday into the WV ski areas. We could even see another round of natural snowfall Sunday night, into Monday for Snowshoe, Canaan Valley and Wisp Resort in Maryland.

We may be seeing the widest range of temperatures that we’ve seen all season long when you look at the fact that while Snowshoe was seeing 5° at 5am this morning, Beech Mountain was at 18°. However, really the entire region of the Southeast and mid-Atlantic mountaintops should be seeing pretty sweet weather with lots of sunshine and temperatures that will allow for snowmaking at night and highs in the mid-to-upper 30s on Saturday and maybe ten degrees milder on Sunday – but that spells pretty awesome conditions for which to enjoy the slopes.

Slope conditions will be about as good as it gets and that takes me back to the “crazy, wild ride” we’ve seen this winter…and to the comments and questions that many of our readers have sent me.

One reader posted, “Guys I keep hearing about how good things are on the slopes, but this has got to be the least snow you’ve ever had. It is the pits.”

Crazy thing about THAT winter is that after February 10th, there was another 106.2″ that fell to get them up to 162.2″ on the season. No – I don’t think we will see those kind of snowfalls over the next six or seven weeks – but who knows?

…and for the record, we only had 47″ of snow at this stage of the season (again using Canaan Valley) during the 2001-2002 season and things NEVER turned around that year as only 81.7″ of snow fell that year.

So, yes Virginia it has been an odd season for natural snowfall.

JUST CRAZY AMOUNTS OF MOISTURE THOUGH…

I think the thing that sticks out to me about this winter thus far is the rain totals we’ve seen this season. I have previously reported the fact that as of last weekend we had already seen four major rain events where many of our mountaintops from NC up to WV had experienced at least 2″ of rain over a 36-72 hour window and a few locations had experienced three rain events with in excess of 4″ of rain.

We don’t like to talk about that four-letter-word around here (rain), but since we’re talking wild and crazy weather – how about this last week saw 1.60″ to 2.16″ of rain at most of the ski areas from Maryland to Tennessee to North Carolina.

Here in the High Country we have seen:

Things have been rather wet to say the least.

But The Weekends Have Been Pretty Good to Great!

As I have shared a few times this season – we’ve seen some rainy weekdays and mild temperatures and way too many “thaw periods” where things DID look “the pits” on the slopes…only to see frigid temps hit late in the week that allowed for focused snowmaking and then near pristine conditions for several weekends.

How about these for some “pictures are worth a thousand words”.

HEY, I could keep going, but I’m sure you guys are tired by now!

Previous Post
Ski Southeast President’s Day Weekend Forecast: The cold is back!
Next Post
Who the Heck Says This Has Been a Bad Winter?