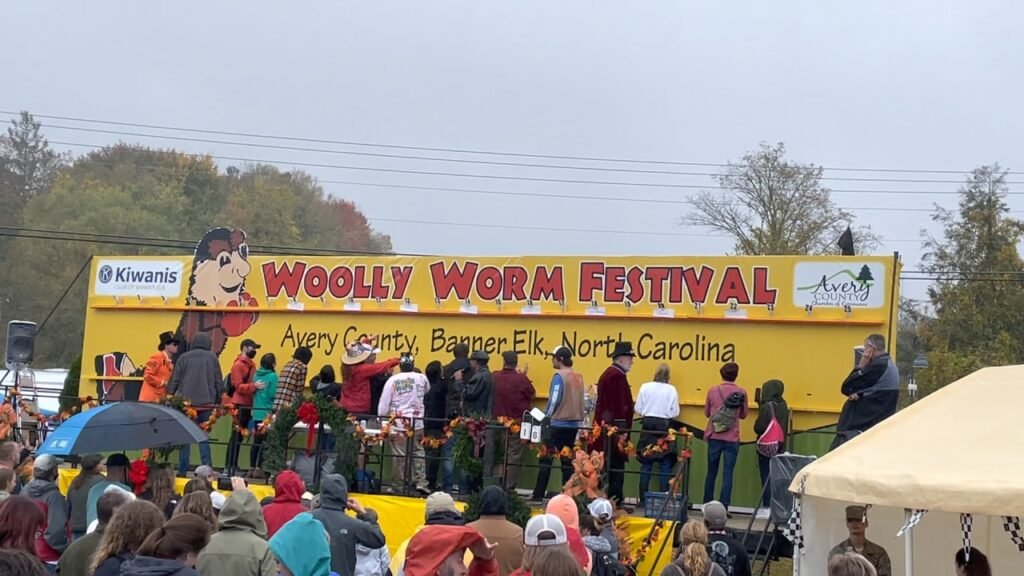 It is always great to put a face with a name, right? After posting the name of the winning worm and the forecast the other day, Eric Wood of Hickory, North Carolina reached out. Eric is the racer and owner of “Let’s Go Brandon” and he sent a couple of pics.

As you read below, you can see that we had previously posted the forecast and the official reading of the worm that was performed by Tommy Burleson (and witnessed by Adam Binder and Jason DeWitt).

There’s been no posting of the winning worm until Eric sent me his closeup photo of “LGB” and upon seeing it for the first time last night – I HAD to wonder how in the heck Tommy was able to find any “cold weather” on that worm (other than the first three bands)!

Most of the woolly worms I saw at the festival had far more black on them. Ditto that for some that I’ve had to dodge on the road this Autumn. So it had to be tough when old “Let’s Go Brandon” was declared the winner and presented to Tommy to diagnose and determine a forecast that was even CLOSE to being “chamber of commerce” worthy.

Now I am no expert, but Tommy’s eyesight must be much better than mine, because other than the first three bands and some “little tiny black hairs” on the tail of “LGB”, there’s nothing but brown on that bad boy.

If you’d like you can click on the image to the left, enlarge and inspect it for yourself, but Tommy did some creative reading to locate enough black and dark bands on that winning worm to predict a winner that will at least keep him on talking terms with the ski resort owners and marketing managers in the area! (I DID notice that Beech Mountain’s Talia Freeman was on stage at the end of the races, so Tommy was probably intimidated into providing a resort-friendly prediction!)

All kidding aside, thanks to Eric for providing the photos. It was good to be able to promote the winner here on SkiSoutheast!

READ ON FOR THIS WINTER’S FORECAST

Let’s cover the fun stuff first. Day one of this year’s Woolly Worm Festival was a wet one. The waves of misty rain dampened the crowd both in terms of attendance and wet clothes. Some media have reported the crowds as “record numbers”, but I can share that the crowds were not at levels seen in the busiest of years. Last year’s event was cancelled due to the covid pandemic, so ANY attendance this year was going to be a bonus. Had the weather not been so wet and dreary, there is no question that it would have set records as the roads, shops and restaurants in the area were packed. However, it was pretty nasty from around 11am until 3pm so festival attendance was less than it would have been otherwise.

Regardless, a brisk crowd braved the nastiness and made the 44th year of the historic event a great one. I go every year simply because its a lot of fun watching kids of all ages race caterpillars on a large backdrop of strings. Despite the rain, Anne Winkelman, who serves as the Executive Director of the Avery County Chamber of Commerce, shared, “All of our vendors were excited, even with the rain on Saturday, it didn’t stop the crowds from coming Saturday and Sunday and some vendors shared that they had their best festival ever in terms of revenue and sales.”

Our own ResortCams LIVE feed was featured on THE WEATHER CHANNEL on Sunday morning, when the weather was glorious.

We Try to Stay Away from Politics Here….but…

This year’s winning woolly worm was named “Let’s Go Brandon”. Upon winning the final heat and being declared the winner, the media that was in attendance took up the stage and did interviews. It was pretty obvious that some, but not most of those on stage had a clue as to the fact that the phrase “Let’s go Brandon” is referring to a viral video of the NASCAR Racer, Brandon Brown.

In the video, the crowd behind him is chanting an “anti Biden” phrase. However, NBC reporters covering the event were claiming the chant as “let’s go Brandon,” which has since been referred to as a form of damage control.

Across the country, multiple sporting events have had large crowds chanting “f*** Joe Biden” in protest of his presidency.

Following the viral video, people have been creating different memes with the phrase “Let’s go Brandon,” and posting them all over social media.

What are the odds that the winning worm would be “Let’s Go Brandon”? It was also interesting of how some of the region’s promotional people, as well as local news have all posted the winner being “Let’s Go Brandon” NOT KNOWING the connection. Many have already taken the winning worm’s name off of the promotional follow-up news and others are probably worried too much about it and “wondering what we’re going to do”.

As of this posting, you’ll be hard pressed to find links to WHO WON, WHAT THE WINNER’S NAME IS, and/or WHAT THE PREDICTION FOR THE WINTER IS? According to our sources (that asked not to be shared), data from the entire day’s races was tossed upon hearing about the negative inference.

Unfortunately, we are now living in a world where you can’t say anything negative about our nation’s leaders. Where were those people 11 months ago? If a festival had been held last year, the winning worm could have been named “Trump’s a Douchebag” and it would have been celebrated and gone viral nationally. Throw some loosely connected, “Let’s Go Brandon” phrase on the winning worm and it is another thing added to the list of cancel culture antics.

At the time of this writing, some people are scrambling to inform the news media NOT to share the name of the winning worm and only the person racing the worm, although at this time we have not seen a photo, nor heard or received the name of the person. That too might have been ditched in response.

YOU CAN’T MAKE THIS STUFF UP…

Regardless, we’ve received emails wanting to know WHY SkiSoutheast (nor anyone else) has posted the Winter Forecast according to the Woolly Worm, formerly known as “Let’s Go Brandon”.

So here we go. The photo to the right is of the intricate details provided by the long time “worm reader” Tommy Burleson. Yes, THAT Tommy Burleson, the 7’4″ former NC State and Team USA basketball player and Avery County resident. Tommy’s details are as “fuzzy” to outsiders as “LGB” the worm. However, to simplify things, Tommy shared that – according to the Woolly Worm, the average temperature for the season will be 27 degrees. He further clarified that the rings on the worm indicate as such:

The Woolly Worm has 13 segments and here is this year’s Winter Forecast:

If the woolly worm’s colors hold true to the weather predictions, it’s going to be a cold start to the 2021-22 winter season. Fleck is a mixture of black and brown, which means below-average temperatures with frost or light snow.

When you “MAP” that against the calendar, that translates to:

With some nice snowmaking temperatures and the forecast above – we’ll take it. Eight of thirteen weeks of Winter are predicted to be below average temperatures or colder than normal and only five being warmer than normal.

By the way, there was a second winning worm this past weekend. A lot of people don’t know but there is a corporate race each year and this year’s corporate winning worm was named “Rick”. “Rick” was raced by Nancy Owen with The Town of Banner Elk. She is the Tourism Development Authority Director in Banner Elk. I could be wrong, but “Rick” is probably Rick Owen who serves as Town Manager and Finance Officer for the town of Banner Elk.

Email me (be nice) at: [email protected]