Late Season Snow for All of the Remaining Open Ski Areas! 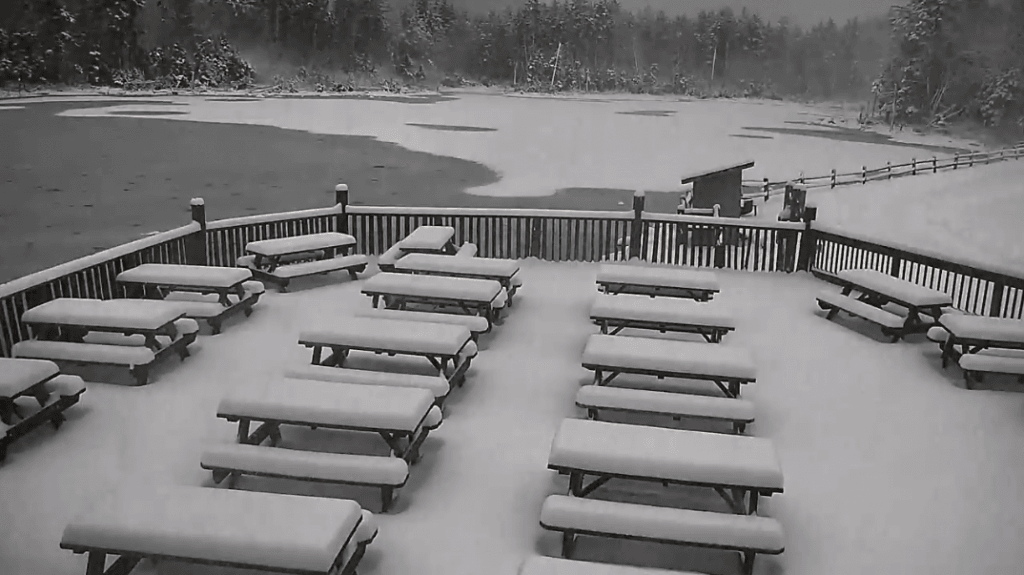 Winter Storm “Stella” or whatever you want to call it began overnight for the ski areas in the Southeast.  Every single ski area that is open right now received measurable snow and more is on the way today and tomorrow.  It’s been a lean year for snow and this is definitely a nice way to wind down the season!

The first part of the storm is just about over this morning and snow totals overnight were right in the forecast range and even exceeded it when it comes to Bryce Resort.  Bryce is the big winner this morning as they are reporting 9″ of freshies!  They had only seen 5″ of snow so far this season so they just about tripled their season snowfall in the past 24 hours!  Looks beautiful out there this morning.

Snowshoe and Wisp Resort are the runners up as they are both reporting 6″ of powder this morning.  The image at the top is from the Boathouse Cam at Snowshoe this morning.  Pillows!

Below is the table with all of the snow reports this AM.

The North Carolina ski areas were definitely on the lower end of snowfall totals in the region but a few inches of snow makes a huge difference.  Here’s a nice video that Cataloochee just posted this morning.  It sure looks good out there!  Also, they finally turned the camera sideways!  Yes!

Wherever you go today should offer some excellent skiing.  All of this snow fell overnight after the lifts stopped turning so first turns this morning should be AWESOME.  Massanutten noted on their snow report that all of the snow fell after the slopes were groomed, so it’s all just there waiting to be sprayed.  It’s going to be hard to work today as I am DYING to go ride some powder.  Must. Not. Look. At. Webcams.

As the storm progresses off to the Northeast today we’ll see Northwest Flow snow showers begin to kick in.  A little bit more snow is forecasted for the North Carolina and Virginia ski areas today and tomorrow, but for the most part West Virginia is expected to be the big benefactors.  Here is Brad Panovich’s latest video forecast where he talks more about it.

A foot plus of snow for Snowshoe would be excellent and would ensure some solid conditions for the last few weeks of the season.  I still can’t believe that Canaan closed on Sunday and Timberline is closed through the weekend.  Hopefully Wisp can open back up sooner rather than later and allow people to get that powder!

It is a huge bummer that one of our best patterns of the season is happening so late in the winter. If you look at the snow report page you’ll see that only three resorts made snow overnight, those being Snowshoe, Wisp, and Wintergreen.  Then again, we only have a week or two left to go so I suppose that this snow and cold might be enough to help the ski areas last that long.

Enjoy the snow and if you are skiing or snowboarding today, take some pics and send them to us!  We’d love to see em.  And don’t forget that Resort Cams has live views from just about every ski area in the region if you aren’t lucky enough to get out and make some turns.  Should be fun to watch!