WHEN WAS THE LAST SIGNIFICANT SNOWFALL IN THE SOUTHEAST? 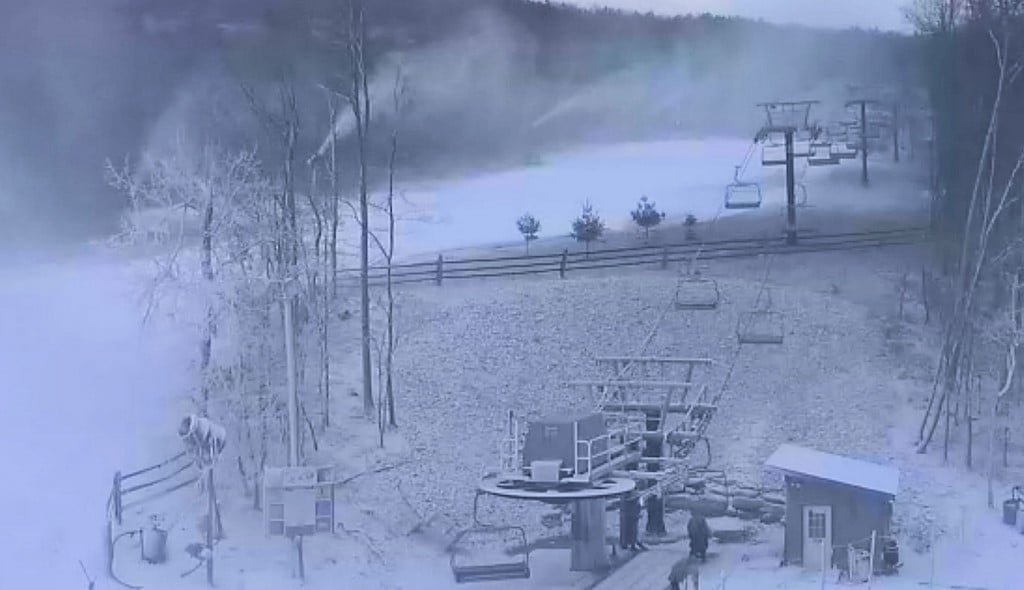 Check the SNOW REPORT for all the details, but for today I thought I’d bring you the NEWS OF THE DAY and that of course is to reflect which resorts were able to begin making snow.

All but six ski areas were able to make snow overnight and as of this morning temps range from 18° at Canaan Valley and Timberline Resorts in WV to 34° at Wolf Ridge Resort in Western North Carolina.

Someone emailed me asking when the last significant snowfall fell in our region and that was actually back on December 11th at Canaan Valley when 2.7″ fell. Beech Mountain last recorded significant snowfall on November 28th when 4″ fell. Normally December is a snowy and cold month across the region but NOT SO this month as only 2.5″ of snow has fallen so far in the month of December atop Beech Mountain’s 5505′ elevations.

Even the more snow-prone West Virginia has only seen 8.7″ of natural snow in December after seeing 29.6″ in NOVEMBER! 26.5″ of snow fell in December of 2013 so as you can see, we’ve been pretty snow-starved.

So WHEN is this 130% of normal snowfall going to fall? Remember that IS what forecasters predicted for this season. So far that damned Woolly Worm and every other forecaster has been wrong. HOPEFULLY January will make up for it!

Here’s a bit of a TOUR today:

Winterplace Resort – 28° and NOT making snow but they are the only resort to report one-half inch of natural snow! They report that they will begin making snow later in the day. They are open with 21 of 27 trails, terrain park and tubing open. 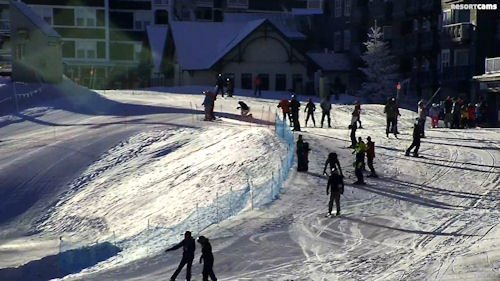 Snowshoe Mountain – 21° and making snow with 36 of 60 trails open as well as tubing and terrain parks. Snowshoe IS making snow this morning but only on unopened terrain (with a minor couple of exceptions). Snowshoe’s heavy crowds on the mountain MUST be affecting their internet because the LIVE CAMS take a while to load but they are worth the wait.

Wintergreen Resort – 20° and making snow all over the mountain. Open with 10 of 26 trails and tubing as well. They were showing a nice TRACE of snow this morning as well. See it LIVE on their slopeside cam at: http://www.resortcams.com/webcams/wintergreen-slopeside/

Massanutten Resort – 25° and making snow with 6 of 14 trails open and 8 lanes of snow tubing. Mass is making snow in their East Street and CMB Terrain Parks as well.

Bryce Resort – 28° and making snow with 6 of 8 trails open and snow tubing. We noticed that as of 8am Bryce was making snow higher up the mountain and not down at their base. 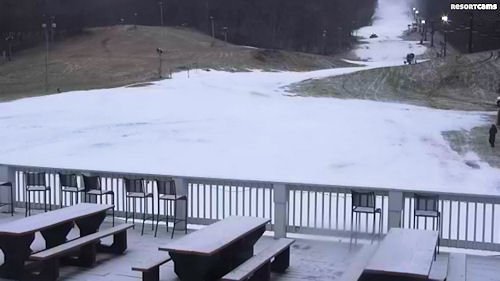 The Omni Homestead Resort – 26° and making snow and open with 2 of 9 trails to their mid-station for day sessions only. Their webcam showed a TRACE of snow and their weather station was reporting SNOG at 8:30am. (Freezing Fog = Snow + Fog = SNOG) We also watched their groomers out maintaining the slopes this morning. It’s not GREAT, but there IS snow to play on. (There are some thin areas.)

Timberline Resort – 18° and making snow which you can see on the LIVE CAM. As of 9am they had not updated their report, but we’ll assume they still have 13 of 41 trails open for today. 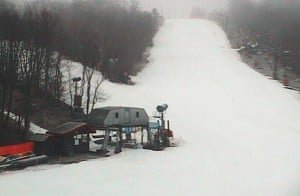 Appalachian Ski Mountain – 32° but the wet bulb temp is not allowing snowmaking at this time. However App is open with good conditions on 9 of 11 trails, terrain parks and ice skating.

Cataloochee Ski Area – 35° and not making snow but they too show good conditions on 10 of 17 trails and snowtubing as well.

Ober Gatlinburg – 33.4° – 2 of 9 trails open. Tubing and Ice Skating are open and Ober posted this message which provides a clear picture of what MANY ski areas in the Southeast and mid-Atlantic have been experiencing.

They wrote, “We have consistently been experiencing temperature inversions, which makes our temperature much warmer on the mountain when other areas are experiencing cold temperatures.  With the deteriorating snow conditions, our Handle Tow is currently our only operational lift.”

Sapphire Valley – 40° and no snowmaking and they remain closed until the cold air infiltrates that area.

Until tomorrow – THINK COLD and SNOW!

Previous Post
There IS Good Skiable Terrain to be Found at Southeastern Ski Resorts
Next Post
I TOLD YOU THE SKI RESORTS WOULD BE LOOKING BETTER BY WEDNESDAY!