You just never know when you are going to come across some information that just stops you in your tracks and you say, “Wow, that’s pretty cool.”

Recently, I was in Nashville, Tennessee, attending the National Ski Areas Association’s annual conference. During the opening ceremonies of the conference, two of the three members of the gold medal-winning mixed aerials team spoke to the conference attendees. 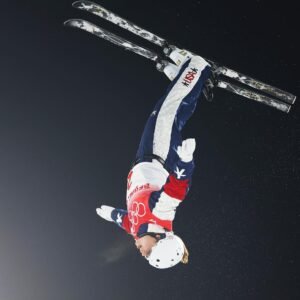 Ashley Caldwell, the lone female of the winning trio, spoke first and caught my attention when she spoke about learning to ski in the mid-Atlantic, and one of those ski resorts being Snowshoe Mountain in West Virginia.

Her teammate, Justin Schoenefeld, who also greeted the crowd and announced that he learned the sport at Perfect North Slopes in Indiana, right across the Ohio state line.

The third member of the team, Christopher Lillis, was vacationing in Hawaii and didn’t attend the conference.

Learning there was a West Virginia side of the story, I asked Caldwell for a couple of minutes to chat with her about her Olympic experience and making turns on ski slopes in West Virginia.

Caldwell, who was raised in Northern Virginia and now calls Park City, Utah, home believes skiing early in life at small resorts created her passion for the sport.

“My dad started me skiing when I was 3 years old at small resorts that were very family oriented in the Virginia, West Virginia, and Pennsylvania areas, and that’s where I developed a love for skiing and that’s why I still love it today,” she said. “I don’t think I would be where I am today, if I didn’t learn to ski at resorts like Snowshoe.”

The games in China were Caldwell’s fourth Olympics, and she admits that the competition is always tough, but there is nothing like representing the United States.

“To finally win a gold medal and hear the national anthem just brought tears of joy for me. Representing Team USA is overwhelming at times, because you dedicate so much time to be the best you can be, and when you go to the Olympics, you realize you are representing the entire country on the world stage, and it makes it feel just so much more.” 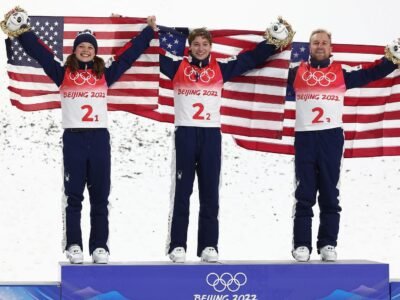 This was the first Olympics that featured the mixed team aerial competition for skiing. Caldwell also just missed out on another medal in China, finishing fourth in the individual competition.

The trio of gravity-defying skiers won the first Olympic gold medal in aerials freestyle skiing for the United States since Nagano, Japan in 1998.

Competing as a team was something new for everyone, and Caldwell really appreciated being able to share in taking that top podium spot.

“I have always only competed as an individual,” she said, “and being part of a team and winning a gold medal was awesome. I loved being able to share the victory with other people, and that team aspect is really unique and now I will have a gold medal forever.”

When you think of team sports like football or, say, basketball, coaches of those sports devise a game plan for the team to follow. Caldwell said it was much different for them.

“Yeah, we had a strategy, and that was to do routines with the highest degree of difficulty, the hardest tricks of any of the competitors and just nail everything. The three of us have been training together for a real long time and have a really good bond, so it was a natural that we would team up together.”

I have a saying when it comes to playing on ski slopes and that’s “Let gravity be your friend,” and, in this case, it was the friend of a skier who made some of her first turns in West Virginia, Ashley Caldwell.

Article republished with permission from the Charleston Gazette-Daily Mail.